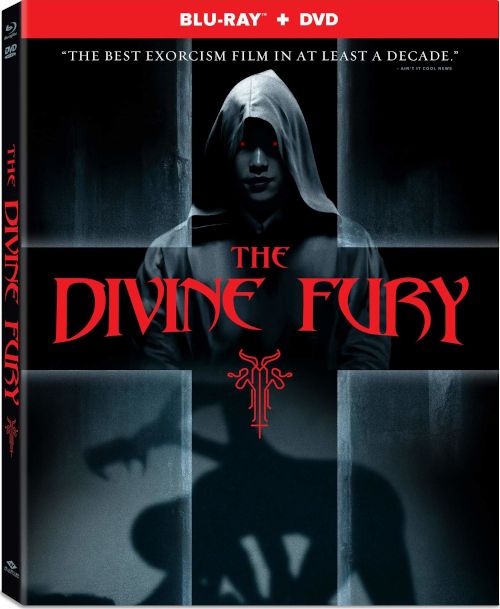 Movie
I initially saw the trailer for The Divine Fury while watching another Well Go USA title and said “Ok, I have to see that!”. It looked like a weird mix between The Exorcist and a marital arts movie, and I was expecting some bizarrely entertaining fun. Well, In both regards it delivered, but not in the way I was expecting. There’s some hand to hand combat, but it’s really reserved for the end of the film, and the rest of the time is spent much more in the spiritual realm than intimated from the trailer. There’s a lot of creep and demonic “battles” throughout, but the sadly the movie is lacking in real scares, leaving it more a supernatural action/horror movie than a REAL horror flick.

The story revolves around Yong-hoo (Park Seo-Joon), who has been given a gift. The film opens up with Yong-hoo and his widower father living in peace, only for that to get ripped away from him when a demon possessed youth ends up killing the father. The young boy is filled with grief over his loss, and ends up blaming God for his troubles, and decides to leave his faith and become …...an MMA fighter! Years later he’s beating people up in the ring, using what seems to a hidden demon of his own to fuel his power. However, he develops a strange stigmata that magically allows him to use said stigmata to drive out demons and evil spirits from people.

However, before he can begin spiritually kicking butt, Yong-hoo has some problems of his own. He’s very obviously still haunted by some demonic spirits who want him badly, but his newly formed (and at this time unknown) stigmata is able to keep them at bay for now, but who knows about the future. Going to a child medium to find out what’s wrong with him, Yong-hoo is told that he’s “screwed” (in the medium’s exact words) and sent to a much more “unorthodox” person to help him. This unorthodox method is Father Ahn (Ahn Sung-ki), a Vatican approved priest who is on a mission to rid Korea of evil spirits and demons. Luckily for him business is booming, and there are a LOT of demons to exorcise. Utilizing Yong-hoo’s powerful stigmata, Father Ahn gets closer and closer to his true goal. The master mind behind this flood of demons and spirits, a powerful sorcerer known as the Black Bishop (Do-Hwan Woo).

The Divine Fury is actually rather fun. It starts out seriously enough, with a burst of true horror, but then switches up about 35 minutes into the movie and goes full on The Exorcist on us. Father Ahn and his one man wrecking crew of demonic butt kicking is more humorous than it is scary, as the film leans heavily towards supernatural action than any real scares. Yong-hoo is a supernatural butt kicker, who not only uses his stigmata to exorcise demons, but his MMA skills to open up a can on them as well. Father Ahn has a bit of a secret and they make some effort to make him devious and mysterious, but we can all see where this is headed. It’s a race of who can out exorcise the other until they meet up with the “boss” of the whole demonic invasion.

The Divine Fury was shot using Arri Alexa digital cameras (surprise, surprise) and finished at 2K for the home video master as well, providing a very lavish and heavily stylized digital production to enjoy. The Blu-ray is stunning to watch, bathed in deep purples, reds and blues, yet still managing to give off a ton of fine detail. CGI can be a bit soft and wonky (Asian productions don’t put as much emphasis on CGI as we do in the U.S., but they’re catching up fast), but intimate details are rendered clearly, as are the background of a car in Seoul, or the brightly lit opening sequence between Yong-hoo and his father. The blood and gore aspects are actually really impressive to look at, and look more natural than most CGI I’ve seen from an Asian film. There’s some very mild banding in the darker shots, but nothing too aggressive and definitely less than most Well Go USA titles that suffer from that artifact. A great all around encode.

The 5.1 DTS-HD MA mixes in both English and Korean are more than great, and once again I’m going to advise sticking with the Korean language track unless reading subtitles is a chore to you. Especially considering how weak this English dub is. The tracks are powerful and punchy, with a lot of surround activity with the shrieking demons and the rumbling bass of the score. It’s eerie and probably the creepiest part of the whole movie, but the constant shrieking and pattering of strange otherworldly monsters makes for a truly encompassing experience. The bass hits are deep and heavy, adding a pounding weight to the tense exorcisms going on throughout the two hour run time.

The Divine Fury is a rather interesting project that mashes several film elements together to create one large super movie. It initially starts out as a story about how a man deals with his rage and fear after losing his father (with supernatural elements), and then quickly morphs into an exorcist horror film, before seguing into an almost Underworld meets I Frankenstein superhero scenario where we have a full martial arts demon vs. demon hunter face off at the end with amped up angelic/demonic powers. However, probably the biggest downside is that the movie lacks any real SCARES, which is kind of sad, cuz it has a goofily interesting premise and a lot of the CGI and exorcism elements are rather fun.

Thanks for the review. Very interesting story. Will check it out once available on amazon prime/netflix.