The Death of Superman - Blu-ray Review

The Death of Superman 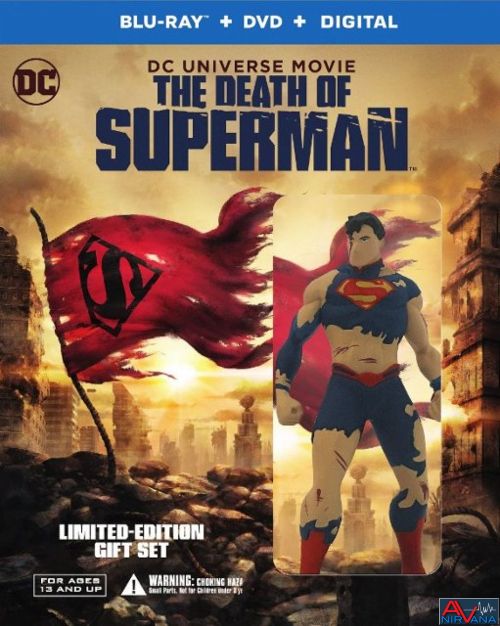 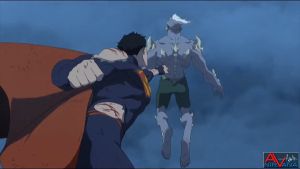 Movie
I’m a huge fan of the newer DC Animated Universe (DCAU) and have really enjoyed the more serialized nature of the films over the last 8 years or so. The series started out as a more standalone idea, but soon morphed into a more cohesive universe, complete with recurring voice actors/actresses, continued story lines, and themes taken straight from the 80s, 90s and New52 reboot series. After the financial success (even though critically they’re trashed), the DC Live Action films have reinvigorated one of the 90s most powerful (and shocking) stories about supes. His death. Batman vs. Superman (and the resulting Justice League film) did their own spin on Superman’s death at the hands of Doomsday, but the story had actually been done several years prior with the DCAU film Doomsday. However, like Batman vs. Superman, it wasn’t exactly nearly as faithful to the original comics as fans would have liked, so Warner/DC have gone back to the source and transposed the original tale of the Kryptonian killing machine’s war with Superman. Even going so far as to complete it by making the story a two parter and following it up with the conclusion in Reign of the Supermen (which will follow reasonably shortly from what my contacts have been able to reveal).

The story is really a dual story, with two plots going on simultaneously. The first is the rocky relationship between Lois Lane (Rebecca Romijn) and Clark Kent (Jerry O’Connell). Lois and Clark have been getting heated, but their relationship can only go so far when one person is keeping a deep secret. In this case, it’s the really obvious one. Clark can’t come to grips with telling Lois that he’s Superman and it’s killing their relationship. Lois want’s to take it further, but Clark still worries that if he tells her his secret, that she’ll be put in undue harm (the most common curse of a super hero).

Simultaneously, the world is going to need the strongest man alive, as a monster of unspeakable power has come to earth at the hands of an asteroid. This asteroid is bringer of Doomsday, an ancient Kryptonian monster of near invincible nature. Getting loose underwater after re-entry, Doomsday (nicknamed later in the film by Lois) begins an unstoppable rampage, destroying entire cities in his path of wanton destruction. Even the Justice League gets destroyed in a matter of minutes, meaning it’s up to the one alien being who has enough power to actually take on the monster mano-e-mano. 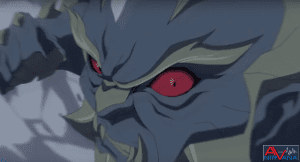 The title of the film really gives it away for anyone who isn’t aware of the original comics, or hasn’t watched Superman: Doomsday or Batman vs. Superman (the DEATH of Superman isn’t exactly subtle), but it’s the journey that counts. We all know that Superman is going to end up on a slab at the end of the film, but it’s how they portray the massive 35 minute battle between the ancient evil and Superman that sells it. The complex emotions that Superman portrays as he finally meets his literal match. Watching the cocky boy lose his invincible self image, to seeing him realize that he may not survive this is shocking. O’Connell gives a nice heart and soul to the Man of Steel, and keeps him both sensitive and kind towards Lois, and the powerful, godlike, persona of Superman equally.

The supporting cast is filled with recurring voice actors, with Rosario Dawson reprising her role as Diana Prince/Wonder Woman, Nathan Fillion coming back as Hal Jordan/Green Lantern (since the DCAU Green Lantern film he’s been replaced by someone else), Jason O’Mara as the dark Knight, and Christopher Gorham as Barry Allen/The Flash. They aren’t really a big part of the movie as they get trashed by Doomsday early on, but it’s nice to see the continuity with the voice actors and they each add a little bit of flair to the movie, so it doesn’t end up just being a giant fight to the death between our main character and the villain. HOWEVER, that “one long battle” aspect of the film adds its own unique dynamic as well. It makes it a thrilling adventure, despite the simplicity, and sets up the series for the more dramatic sequel in Reign of the Supermen coming out later this year.

Rated PG-13 for sequences of violence and action including some bloody images. 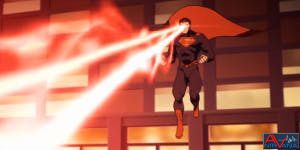 The DCAU films from Warner Brothers are usually more similar than different in their appearance and quality. Like all the rest, The Death of Superman features a fairly stellar looking encode, complete with strong primaries and a mildly muted color grading (primaries are more maroon than red, deep blue than bright blue, etc etc etc). Fine detail for the simple animation is well defined, with blood trickling down Superman’s face, cracks in the buildings, and the little edges on Doomsday’s body showing up well. The darks are usually very revealing, but the are home to the DCAU curse. Banding, banding banding. The banding present in The Death of Superman is better than some, but worse than others, making it a good looking encode, but plagued by dark scene banding that is REALLY obvious. Like usual, I’m looking at the bitrate and comparing to other animated Warner Brothers films, and I have to come to the conclusion that the banding is baked into the master as there is no reason to have this much banding from the bitrate provide. It’s a good transfer that’s for sure, and follows in the path of all the other DCAU films that have come out to date. 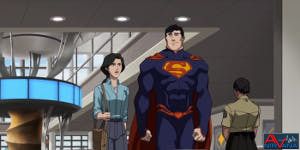 Like the video, there is a certain comfortable stability about the audio mixes for these movies. The 5.1 DTS-HD MA mix is strong and powerful, especially considering that half the movie is one long battle between the Justice League and Doomsday. LFE is punchy and impactful, and surrounds are active with the crashing of debris along the way. The dialog is well placed and cleanly replicated, but I noticed that the track was recorded (as a whole, not just dialog) 3 decibels lower than most other mixes, requiring a slight boost on the AVR. Luckily that doesn’t effect the balance at all, as the track is evenly balanced and requires no lifting or dropping the volume when action and quiet scenes meet. 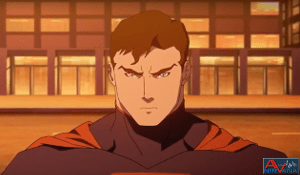 • The Death of Superman: The Brawl That Topped Them All – Experience the battle between Superman and Doomsday like never before as creators of the iconic comic and the new film explore the nuances of "The Greatest Fight" with the help of a martial arts expert.
• A Sneak Peek at DC Universe's Next Animated Movie, Reign of the Supermen – An exciting look at the next film in the two-part saga that brings the epic and emotional story of a world without the Man of Steel to life.
• From the DC Comics Vault: Legion of Superheroes: Dark Victory: Part 1 – After eliminating Imperiex, Brainiac 5 takes over his army and plans to take over the universe. With Superman thought to be dead, the other Legionnaires must stop him before it is too late!
• From the DC Comics Vault: Legion of Superheroes: Dark Victory: Part 2 – The Legion faces Imperiex in a final battle, while a traitor lurks in their midst.
• Trailers

The Death of Superman proves that it WAS worth retelling the story of Superman Doomsday and did a MUCH better job of it than what was shoehorned into Batman vs. Superman (and Justice League). It even gently lays the ground work for what will happen in Reign of the Supermen (that opening scene with Hank Henshaw wasn’t put there for no reason) and incorporated a delightful “gotcha!” moment with Lois and Clark. One that has either been danced around or just skipped in most of the DCAU. Warner has once again give us a typical audio and video pairing that matches up with the rest of the films as well as a decent set of extras in the set. The copy that I got to review is the “limited edition which comes with a little figurine of a beaten up Superman, but you can buy the regular edition or the 4K through our Amazon link just as easily. Recommended as a good watch for the DCAU fans.