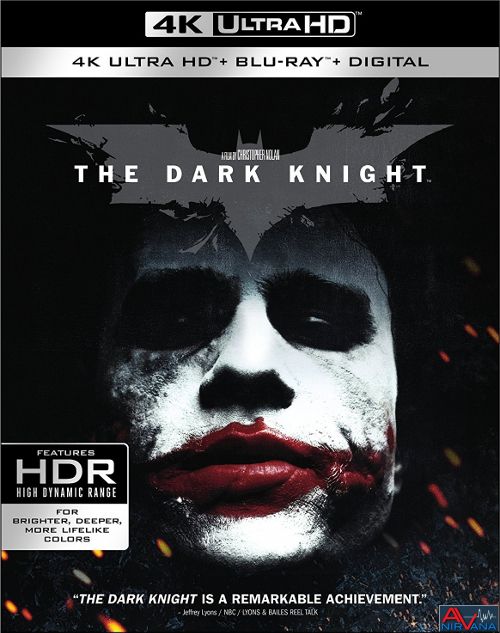 Movie
I’m going to go out on a limb here and catch some serious flack by saying this. I don’t think that The Dark Knight is the best of the trilogy. I know it got LOTS of critical acclaim when it first came out, but I think that The Dark Knight ranks UNDER Batman Begins in terms of enjoyment. Before the gasping in horror and death threats commence, let me say that I still think The Dark Knight is an EXCELLENT film, it’s just not that good of a BATMAN film in my opinion. Begins held the perfect blend of action/comedy/seriousness/comicishness and still is one of my favorite Batman films of all times. Now, I do think that The Dark Knight is the better FILM for the most part. Nolan mastered his characters at this point and turned it into one of the better crime dramas of that time period, but in the process he go so involved in creating a “grounded” Batman film that he lost sight of actually making it a Batman film. The first hour seems to flow very naturally as a comic book movie, but then he deviates the story lines and deals with backstabbing, doubletaking and the self loathing Nihilism of Batman that it just becomes less “fun”, if you know what I mean.

It’s been a while since Begins, and Batman (Christian Bale) is a walking nightmare for the criminal underworld of Gotham. He and Lt. Gordon (Gary Oldman) have put away most of Gotham’s underworld scum bags, and all that is left is a cadre of mob bosses who are scrabbling to keep what little of their dominance that they have left. Unfortunately for the world of Gotham, said mob bosses are backed up against a wall and they have brought in a rabid dog in the form of The Joker (Heath Ledger, may he rest in peace), a madman who seems to embrace utter chaos and insanity in his dealings. Their idea was to unleash him against Batman and bring him out, but being as unstable and unpredictable as he is (at least to his victims), The Joker turns out to be the biggest wild card of them and may end up destroying EVERYONE in Gotham City.

At the same time, Bruce is desperately trying find a reason to hang up his cloak as the Batman. Rachel Dawes has moved on from him and is now with the new District Attorney, Harvey Dent (Aaron Eckhart), and he seems like the perfect person to clean up Gotham’s streets. He’s honest, he’s got a heart, and Dent is DETERMINED to bring back peace to the city streets, even if it means sacrificing himself for the good of the public. Basically he seems like the perfect person to make Batman obsolete, and a chance for Bruce to get back to being a normal human being. Sadly fate has other plans, as The Joker’s seemingly chaotic actions have a more sinister purpose. Which included tearing the city apart to find Batman and holding the people hostage until the most pure of them all falls to the darker side.

The Dark Knight was a shocking turn of events after Batman Begins, but one that falls in line with Nolan’s bleak story telling bent. The first hour of the film is very similar to Begins, but with some more mature angles as Bruce/Batman is no longer in need of an origins story, and acts as a more seasoned protector of the City he loves so much. It’s at the point when Gordon is “killed” around the hour mark that really shifts the tone of the movie over. The comic book nature of the series gets left far behind and the film quickly begins feeling like a crime drama that is more akin to Martin Scoresese than it does to how Batman Begins felt like. Which is one one of my biggest gripes of the movie. I have always said this since the movie came out, The Dark Knight is a great crime drama, but a poor Batman film as Nolan imbues so much nihilism and bleakness into his story that it feels so tonally different than what he created a few years back.

The same can be said for the ending. His decision to basically have everyone hate Bruce/Batman for Harvey Dent’s decision out of “love” for the city just came across as overly melodramatic and came in line with one of Nolan’s pet peeves about comic book movies. He wanted a REALISTIC portrayal of how the people would take to a vigilante, not a the comic book approach, and while it could have been done amazingly well, Batman Begins was so full of of both aspects (comic book cheese and grounded realisms) that shifting this FAR to the side of bleak realism just feels odd. Other than that, and if you can separate it a little bit from Batman Begins, The Dark Knight is one one well done crime drama with enough twists and turns to rival things like The Departed. Bruce Wayne is still an amazing Batman AND an amazing Bruce Wayne, but Heath Ledger steals the show as The Joker. I originally really liked his portrayal of the clown prince of crime, but it wasn't until I saw it years later that I TRULY appreciated how much the man lost himself into the role. I've gone back and watched Ledger's earlier films over the last decade, and to say that he was completely unrecognizable in his role of The Joker is an understatement. There's a sense of channeling Tommy Lee Jones from Under Siege in with a little Mark Hamill and a dash of originality and you have one of the most iconic super villains portrayed in a truly iconic way.

Rated PG-13 for intense sequences of violence and some menace

The Dark Knight looked GOOD on Blu-ray, and I personally feel that many reviewers gushed over the transfer a bit too much when it came out. The problems stemmed from the fact that Warner Brothers slathered the image with aliasing and tons of edge enhancement. This led to halos galore (the most obvious being the one where the Joker came out of the hospital in the nurse’s uniform. On a decently large screen it made him look like an angel with that big of a halo around his body). However, this new 4K UHD disc cleans that up VERY nicely. Supposedly The Dark Knight was given a new 4K master and this disc seems to be based off of that one as it looks like all the problems associated with the Blu-ray are gone. The leap from 1080p to 4K UHD is staggering,w the disc showing off raw details and subtle nuances that had even me drooling like a dog looking at a plate of steaks. The film was shot using a mixture of Nolan’s every popular 35mm and IMAX 65mm shots, with the IMAX shots showing up as 1.78:1 intermingled with the 2.40:1 shots of the 35mm sections. I think that this was one of the rougher instances in terms of shifting from one ratio to the next that Nolan has done, but you get used to it after a while, and the IMAX shots are nothing short of jaw dropping. Instead of the highly stylized yellow and amber color grading that Batman Begins was famous for, The Dark Knight is given a very very heavy blue grading (almost oppressively blue at times) with moments of daylight clarity (such as many of the IMAX shots) that show startling clarity and cleanliness. That’s not to say that the 35mm, 2.40:1 portions of the film are any less stunning, it’s just the clarity of those IMAX shots are a step above anything of its ilk. Blacks are deep and inky (although I did notice a few moments of washed out blacks here and there, mainly the confrontation scene between Dent, Batman and Gordon underground), and show detail is beyond reproach. The use of HDR in this film is much more pronounced, with rich primary colors showing incredible pop and clarity, while the black levels still show off some gorgeous white lighting (Batman’s eyes) that are above and beyond the call of duty. Yes, to put it mildly, this is a MASSIVE upgrade from the Blu-ray, and definitely worth grabbing for that reason ALONE.

Like the previous film, I can’t really tell any difference between the Dolby TrueHD 5.1 track and the DTS-HD MA 5.1 mix that is on the UHD disc. By all accounts and purposes, the differences are nothing more than the lossless codec wrapper, as the contents appear to be completely unchanged. This was a demo track back in 2008, and it is STILL a demo track today, as The Dark Knight’s 5.1 mix is jaw dropping. The LFE is hot and heavy, but not nearly as over cooked as Batman Begins and the use of the surround channels is impeccable during the copious action sequences. The tunnel chase with the Batmobile and Bat bike make for some of the most vigorous and intense use of the surrounds, and it sucks you right into the center of the action and doesn’t let its grip go the whole film. Little sounds, like the cell phone ringing in Gordon’s house, or the rustle of Batman’s fabric cape across the floor are all captured perfectly, and the dialog is balanced evenly with the heavy duty action track (although Batman’s rasp has been changed from “scratchy so people don’t know who I am”, to sounding like he’s in the beginning stages of throat cancer).

• Gotham Uncovered: Creation of a Scene
• Behind the Story
- Batman Tech
- Batman Unmasked: The Psychology of The Dark Knight (HD, 46:02)
• Gotham Tonight
• The Galleries
• Trailers and More

The Dark Knight is an EXCELLENT film, but I still solidly stand behind my position that it isn’t that good of a BATMAN film at the end of the day. The first hour feels fantastic, but by the time we get to the Rachel and Harvey decision the movie has changed over to something that feels like we’re in the middle of The Departed rather than a comic book movie. But that gripe aside, it’s a fun watch and Nolan gets much better at shooting action scenes this go around, making for a fun watch. Like usual, Warner has given us a 5.1 that appears identical to the Blu-ray as well as the same special features, but the video quality is a HUGE HUGE step up from the Blu-ray, and really is the big pull here. Easily a must buy for fans of the Nolan trilogy.

Solid marks for this flick... I’m definitely considering making it a buy to replace my BD copy.

Thanks for the review. Worth having that is for sure.

Yep, I’ll be picking this up very soon.

Watched this last night and WOWZERS! You’re not lying when you said the IMAX scenes were jaw dropping. Just incredible and the wife and I looked at each other during those scenes with nods of approval. Outstanding audio as well and the upmix utilizing additional channels was noticeable.

Gears in my brain are turning... interestingly Amazon is sold out on this title. Used are selling for $32 plus! ???

Price tag in this title is super high everywhere! Wow

happens at amazon every once in a while. just wait for it to come back in stock or snag the trilogy. I've seen the trilogy below $60