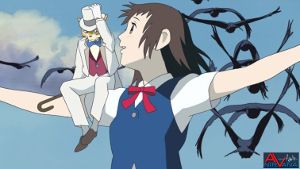 Movie
As of 2017 Studio Ghibli has officially cut ties with Disney proper for their releases and have moved over to Shout Factory as their new distributor. Over this last month they have released 8 of their original titles that were given to Disney, and are in the works to redistribute just about all the rest of their titles (minus the ones licensed to Universal and Up on Poppy Hill and Grave of the Fireflies), INCLUDING the single title that even Disney couldn’t get. My Neighbors, the Yamadas. I missed the opportunity to review for you all 8 titles that were released on the 17th of October, but over the course of the next month or so there will be another set of batches that are coming over via Shout, and I’ll be putting those out for you. Disney did some great stuff with their Studio Ghibli releases, but there were a small handful of titles (such as Princess Monnonoke) that had subpar subtitles as Disney used “Dubtitles” (translations of the English dub) vs. traditional direct translations from the Japanese language tracks that REALLY frustrated purists (myself included). With these new releases, Shout Factory and Studio Ghibli have worked together to rectify those small issues and re-release their lineup on Blu-ray once more at a substantially lower price than Disney was able to.

The Cat Returns is a bit of a unique release among the Ghibli lineup, it was directed by one off director Hiroyuki Morita, and his difference in directing and visual aesthetics sets it apart from the rest. A quirky little fantasy film, it deal with themes such as hanging on to what you are, as well as the dangers of becoming something you’re not. It reminds me very much of those old gentlemen knights in armor tales, where the dashing knight/Baron comes in to rescue the damsel in distress from the evil villains, well in this caste only semi evil, it IS a G rated film.

Haru (Chizuru Ikewaki/Anne Hathaway) is your average Japanese high school student. She’s a bit clumsy, has a crush on the cute upperclassmen and really likes cute kitties. One day she saves a cat walking across the street from getting hit by a truck and her world turns upside down. It seems that the cat is actually a talking cat, and is a prince in the world of cats. Thanking her for saving his life, the price vows to repay the young girl. That vow takes form in the King of the Cats coming to Haru’s house and wishing good fortune upon her. It becomes very clear that the King doesn’t have much of an idea how our world works and sends his secretary to take care of the young girl, including telling Haru that she’s engaged to the prince. Not exactly wanting to be the bride of a cat prince, even if he is a prince, Haru desperately searches for a way out of the deal. At the end of her rope, Haru’s savior comes in the form of a whispering voice that tells her to look up the cat Bureau at the crossroads.

Not exactly sure what she’s going to find there, Haru goes to the crossroads and meets Muta (Tetsu Watanabe/Peter Boyle) who takes her to the cat Bureau, where she is introduced to a cat statue who can come to life, aptly named Baron Humbert Von Gikkingen (Yoshihiko Hakamada/Cary Elwes), who vows to fix the problem for her. Before anything can be done, though, she is captured by the minions of the Cat King and is whisked away to their Kingdom. There Haru is greeted by an overly exuberant king, who does his best to brow beat the young girl into the marriage between her and his son. Desperate to do what it takes to assure the marriage, the King tries to entertain her, to woo her, and to wine and dine her but to no effect. Hoping to wait it out, the King sits back and lets nature take its course. In this case “nature” happens to mean that the longer Haru stays in the kingdom the sooner she’ll turn into an actual cat, unable to return to her normal form unless she gets out within 24 hours 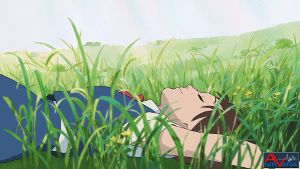 The Cat Returns is a magical little fantasy that spends part of its time in the real world and part in pure out fantasy land. The messages of the movie aren’t as clear as some of Miyazaki or Takahata’s works, but it is pure cute bliss. If you’re a cat person, or even an animal person in general, the animal traits and characteristics make for an adorable time. Mutu is the perfect fat cat, lazy and brusque, but perfectly loveable with the right amount of coaxing. The Baron is very much modeled after the European gentlemen of the 17th century more than a Japanese modeling, which makes him one of the more unique Ghibli heroes. He’s dashing, brave, and completely sweeps the young lady off her feet, even though he never means to do that. Charm oozes from every pore and every time he’s on screen the movie is even better. Haru is very much a traditional anime character, especially for a Ghibli film. She’s never the damsel in distress, but she is still completely feminine. She’s soft and kind to little fuzzy animals, and even though she’s outnumbered and outgunned, she fights and scraps to return to her home, straining just as hard as the Baron and poor chubby Muto. Interestingly enough, I’ve noticed that pretty much ALL of the Ghibli characters share similar characteristics. None of the heroines are the weak damsel in distress types, but are required to work and sweat for their freedom, putting them on par with any boy hero. There’s never an effort to make her exactly like a man, as the feminine characteristics are still there, but the inner strength to succeed and free themselves are there just the same.

There’s a few missteps along the way, mainly to do with the whole “live in the moment” line that the Baron keeps repeating. It’s set up as if it’s a major plot point, but as the movie progresses it seems to fade into the background. Haru IS living in the moment, yet nothing seems to be changing, besides her into a cat. It may be the translation, but it seems to make no sense to the overarching plot. Once the movie goes into the cat kingdom, it takes on a different tone, as the whole goal now is to make a great escape and get out of there. 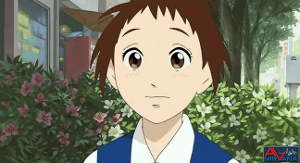 Shout Factory releases The Cat Returns on Blu-ray with a stunningly beautiful 1080p encode that is, once again, barely any different than the out of print Disney edition I reviewed a couple years back. Presented in its original 1.85:1 theatrical ratio, “The Cat Returns” is nearly picture perfect with the wonderful watercolor animation taking a front and center seat on this release. The film is crisp and clear, with excellent lines and no signs of digital artifacting or manipulation. The film employs plenty of pastel colors, with some primary colors punctuating the landscape as a stark contrast. The disc is given a VERY healthy low 30’s bitrate since it is only 75 minutes, and the image really shines with the extra room. Black levels are deep and inky, with plenty of fine detail across the map. The whiskers, the crows, the food that Muta stuffs down his throat, all look simply wonderful. 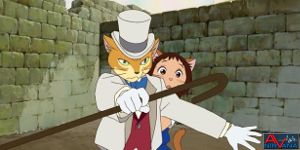 Once again, since The Cat Returns mimics the Disney Blu-ray with identical 5.1 DTS-HD MA encodes for both English and Japanse. The subtitles are luckily BOTH Dubtitles AND the literal Japanese translations for purists. I had to A/B the two tracks, and while I enjoy the acting of Cary Elwes and Anne Hathaway, I feel that the Japanese track edged out the English track. The crispness of the vocals and the surround activity was very similar, but the Japanese track felt a bit “fuller” and less “modern” in tone. The dialog is clean and clear as mentioned, and while its not a hugely immersive track and sticks to the front more often than not, the 5.1 DTS-HD MA track does a wonderful job with the vocals and the score. Coming in from every angle the score fills out all 7 tracks and cocoons the viewer in a beautiful sonic experience. LFE is mild, but still there during the songs and fills out a few ambient noises like the crash of Muta smashing soldiers, and the tower detonation. A great track that does the film justice, and certainly makes me tip my hat off to Studio Ghibli/Shout Factory.

The Cat Returns is sweet and charming and bubbling with adorable animals. The fantasy is there in spades, but it is much different in tone and texture to Miyazaki’s bizarre imagination (which is simply fantastic I might add, as his most bizarre film is my next review), but it is wonderfully sweet and loveable all the same. Studio Ghibli usually isn’t one to have subpar releases (besides the occasional dubtitle issue) and this one is no different. Excellent video, great audio and a solid set of special features gives me the privilege of giving it a hearty two thumbs up to buy for any Studio Ghibli fan. For those who already have the Disney disc, there is no appreciable difference, but if you're wanting to pick up the movie and were balking at the high prices that the older Disney version command, then this is easily the best version available and for a MUCH more palatable price than Disney was affording us. Highly recommended.