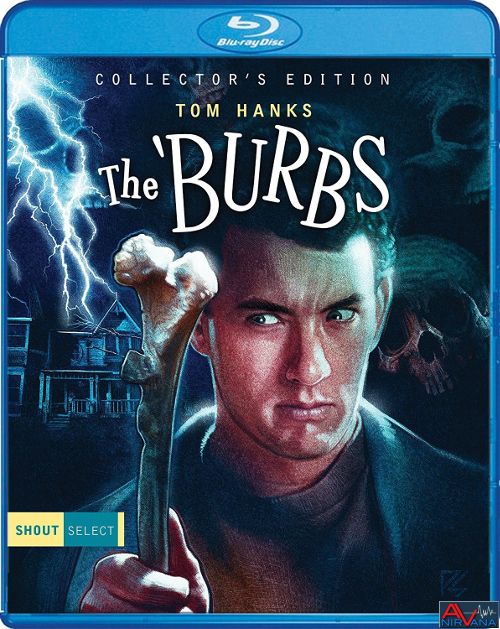 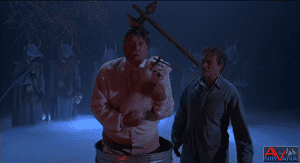 Movie
There are those iconic childhood movies that stick with you through thick and thin, and we all have. Growing up as a formative child in the 80s, I have list a mile long of great movies from that era (especially horror films), but I still stick to a handful of films that I watched over and over and over again during those years. The two that really stick out in my mind are Strange Brew and The Burbs. It had everything you could ever want in a dark comedy. Joe Dante directing, Tom Hanks, a young Carrie Fisher (R.I.P.), Bruce Dern, Corey Feldman, Henry Gibson and Rick Duccomun. I can’t tell you how many late nights I stayed up watching this on TV, or wearing out the VHS copy that my aunt taped for me until I was old enough to start buying VHS and DVDs of the my own.

They say that just because you’re paranoid doesn’t mean people aren’t out to get you. Which is basically the entire premise of The Burbs. Ray Peterson (Tom Hanks) is a stressed out suburban dwelling businessman, and all he wants is a week of rest. Taking off a week to do just that, he can’t exactly get his mind off of doing SOMETHING. Well, when you’re bored, and the only friends you have are your crazy neighbors Art (Rick Duccomun) and Mark (Bruce Dern) then you have to MAKE something up. This comes in the form of the enigmatic and barely seen slavic new guys on the block, the Klopeks. The Klopek’s are a bit mysterious and come out only at night, which may seem a bit odd, but when you’re bored and home alone then the imagination runs wild.

Convinced by the chubby cook Art, and the overly enthusiastic ex-military Colonel Mark (Dern) that the Klopeks are actually up to something nefarious, Ray gets in a bit over his head. Investigating the family seems like a good idea to keep boredom away at first, but soon things get scarier when their crotchety neighbor Walter (Gale Gordon) vanishes one morning. Going full on commando, the trio of man children decide to take matters into their own hand and find out what devious and dastardly deeds their reclusive neighbors are up to! That is, if they don’t get themselves arrested for trespassing and harassment at the end of the day. 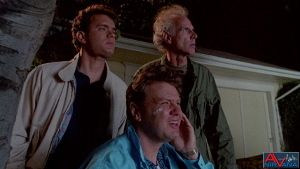 The Burbs is really a conspiracy theory gone viral, with a simple bored statement leading to gossip. Then gossip turns into fear of the unknown, and then fear gives birth to full on paranoia and unsubstantiated theories. If it wasn’t for the fact that Dante keeps the dark film at full slapstick, this could honestly be turned into a thriller quite easily. The bored suburbanites are are bit crazy, with the only grounding forces in their lives a trio of frustrated wives. However, the movie is also hilariously funny, as the comedic group of Duccomun, Dern, Hanks and Feldman make for some amazing hijinks. Hanks cut his teeth on comedy before going into dramatic films, and he’s on top of his game as the serious (but prone to outbursts of unhinged frustration) Ray, while Duccomun and Dern ham it up as his best friends/neighbors. Dern especially revels in the ridiculousness of his military persona, while Corey Feldman pulls off the skater boy neighbor who’s just having a good time watching his older neighbors go completely bonkers.

Dante keeps the film moving at a brisk pace, introducing us to our cast of misfits early on, and then easily drifting the film over several notches as the suburban dads give birth to their crazy theories. What starts out as a little weekend jaunt gets progressively darker and darker until the guy’s are almost unhinged intheir decision making. However, this is what gives the film its charm, as you’re laughing at these guys with obvious gusto as they pretty much sink themselves in their net. Sadly the center act of the film suffers with pacing a bit, and it’s not until the fantastic third act that it pulls back out of the slump it got itself into. 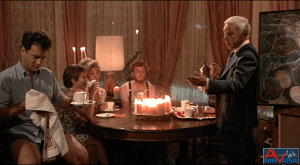 The Burbs was originally released by Universal 4 years ago, and it was a literal travesty on Blu-ray. Filtered beyond belief, and smoothed over to look like Madame Tussad’s wax museum, it was so bad that I actually had to turn off the Blu-ray and switch over to the DVD to get rid of that smeary look. Well, Shout Factory has gone back and given the 35mm source a brand new scan and the results are jaw dropping in comparison. The film has always been rather grainy, but the Universal release was so smoothed out that you couldn’t see any grain for the most part! This new 2K transfer is much nicer, with bright warm “80s” colors (reds can look a bit orange at times) with a lovely layer of grain. Blacks are deep and inky, showing off plenty of shadow detail in the basement and in the night, but there are a few moments where some black crush scrubs some detail from the image. For those of you with region free capability there was also a 2K remaster done by Arrow a while ago, and after comparing back and forth between the two releases, I have to say that they are more similar than not. Sadly I have to give the edge to the Arrow release, as it has a MASSIVELY higher bitrate (in the mid to upper 30s) and the grain structure looks better in motion. That’s not a knock on the Shout Factory release, but rather just an objective fact when comparing to the two releases side by side. However, both of them are light years ahead of the Universal USA release, and the Shout Factory release is the best version you’re going to get unless you go region free. 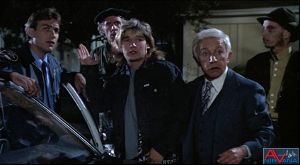 I was fully expecting the 2.0 DTS-HD MA stereo track on Shout Factory’s new release to be the same as the very low quality Universal one, but it looks like they remixed it as well. The track is still a 2.0 stereo track and won’t compete with fully immersive 5.1 and above surround mixes, but it really is a solid sounding audio track. Vocals are clean and precise, and the sound stage is actually pretty wide. The rumbling effects of the Klopek’s furnace rumbles and roars across the room, and the little bits of smashing and crashing from our bumbling heroes makes it a lively experience.

The 44th film in Shout Factory’s “Shout Select” lineup, The Burbs is one of those 80s classics that you can watch over and over again. Everyone involved in the film was obviously having a blast, and the Shout Factory bringing this classic back to us in MUCH superior video/audio quality is a huge boon to film fans. I’ve collected this movie in at least 4 different editions on Blu-ray alone, and between this and the Arrow release, we finally have the definitive edition. The extras are substantial (like most Shout Factory Collector’s editions) and it’s definitely a must buy for Region A viewers.

Thanks for the review. I never actually saw this when it originally came out. Will check it out.

I'm horrified!!!! The Burbs was one of the quintessential films of the late 80s!! Well, I'll forgive you this once though

Just too many movies and not enough time! lol.

You will also have to forgive me because I have never seen it. I am now tempted to buy lol.

you guys are killing me!

I am with you, Mike, a great movie.