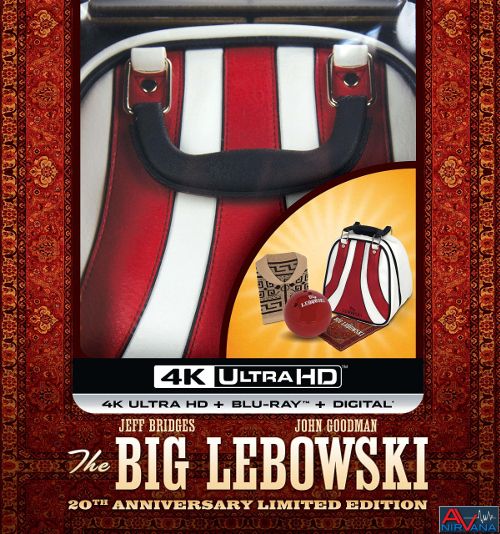 Movie
If I told you that 20 years ago The Big Lebowski bombed in theaters and was thought of as a pariah by many critics you would probably laugh at me. I wouldn’t believe it from all of the acclaim that the movie has gotten over the years, but that’s the reality of the situation. 20 years ago the movie dive bombed in theaters, making only $46 million (which was a decent profit based upon the $15 million budget, but one that was NOT expected based upon the pedigree of cast and directors/writers), and getting lambasted by many critics. It was thought of as too esoteric, too neo-noir, too comedic, too silly, too stupid, and too heady by differing critics at the time. Little would they know that The Big Lebowski would go on to become one of the biggest cult classic films in modern history, and has made more sales on Blu-ray and DVD than ever was with the box office.

It should be expected, but going into a Coen brothers film is always an experience. Their oeuvre of films is so great and so varied that each one is matter of unique interest upon viewing it. Their career has been so wildly varied and diverse, that you can’t possibly imagine what they’ll tackle next. Films like Raising Arizona, Barton Fink, Fargo, The Ladykillers, Intolerable Cruelty, No Country For Old Men, and even a modern remake of the John Wayne classic True Grit, are different from each other, but are still held together by the incredible grasp of the English language that the brothers employ in their writing. Needless to say, The Big Lebowski is one of their most unique and flavorful films to date, mastering the act of blending neo-noir mystery with a slapstick comedy and somehow succeeding at BOTH ventures. It’s a movie that can be seen with your thinking cap on, dissecting little bits of it, but also a movie that just works on a primal level, prompting chuckles and guffaws galore.

Jeff “the dude” Lebowski (Jeff Bridges) is in for a bad day. He’s roughed up, his favorite carpet peed on, and brought in for some questioning. Only thing is, it’s a case of mistaken identity. You see, he was mistaken for Jeffrey Lebowski e.g. “The Big Lebowski” (David Huddleston) and it’s put a damper on his day. Tracking down his namesake to find out what the blazes is going on, “The Dude” gains some absolution and the chance of a nice big payday. You see, Jeffrey Lebowski’s wife Maude (Julianne Moore) has been kidnapped, and Mr. Lebowski needs a reliable gopher to go transfer the ransom money for her freedom. What happens next is an existential journey of good, bad and the ugly as The Dude takes on the mission with his friends Walter Sobchak (John Goodman) and Donny (Steve Buscemi, a master of stupidity).

I won’t spoil the movie for you if you haven’t seen it, but the film is absolutely bizarre, mysterious, and more than a bit hilarious. Every character in the movie is custom fit for their roles (or else the roles were custom fit for them, which seems more likely), with each person adding their own flair to the movie. Jeff Bridges created an iconic character for the ages with The Dude. He’s your typical stoner with Jeff Bridge’s flair, which is just my opinion man! (yes, I’ve got more quotes if you want), but he’s does so with such an affable manner that his goofy meanderings just endear him to the audience. Steve Buscemi is Steve Buscemi. Ugly, stupid, and a master of doing the wrong thing at the right (and wrong) time. John Turturro as Jesus is another fan favorite, while Peter Stormare chews the scenery like he’s never chewed before. However, it’s really John Goodman’s Walter that steals the movie for me. I love LOVE Jeff Bridges as The Dude, but Walter’s ineptness and complete bent towards lunatic violence (him and his service 1911 are a very apparent part of the movie), along with a penchant towards random obscenities had me dying on the floor during my first viewing. Each and every viewing since then has only gotten sweeter, as Goodman eats up the scenery about as much as Stormare, and creates the perfect foil for The Dude’s lackadaisical manner.

While the film is not exactly completely linear, it’s best to treat the film like The Dude does life. By that I mean just go with the flow and let the non stop flow of events and character interactions just wash over you. It’s a movie that’s best experienced rather than analyzed, but it does have a few deeper moments where you can see the Coen Brothers intimating at the futility of trying to control everything in your life. It’s a hilariously convoluted story that is really simple at heart, but one that has become so iconic, so character filled (there’s enough cameos and small bit roles of famous people to choke a horse), and so quotable that it has become probably THE cult classic of the 21st century.

The video transfer is LIGHT YEARS above the old Blu-ray release, and a huge relief for fans waiting to double dip. The old transfer was OOOOOOK, but filled with plenty of over judicious DNR (digital noise reduction) and the smoothed out look is gone. What remains is a nice 4K master that shows off all of the details and colors that was hitherto masked over by the mediocre Blu-ray. I hesitate to say that ALL of the DNR is gone, as the picture seems a bit too grain free and glossy to say that NO DNR was used, but needless to say the picture is increased 10 fold. I was shocked at the use of HDR with the colors, as some of the more vividly and wildly lit scenes (such as the fantasy bowling scene with Maude) really pops off the screen, and textural details are incredible. I will say this, the image is a HUGE leap above the Blu-ray and it looks likes Universal has learned that overly DNR’ing the tar out of your catalog releases will NOT make them look better. It’s the most filmic and natural that it has ever looked and a great looking 4K UHD disc for sure.

Even though The Big Lebowski is given a DTS:X object based track, it feels like a BIT of overkill. Not that I’m complaining in any way, share, or form over the enhanced track. It’s just that the film doesn’t really scream for object placement. Luckily the 5.1 track from the first Blu-ray (and all subsequent re-releases) was an EXCELLENT mix, and the DTS:X track just expands on it a bit more, giving it a more spacious feeling. The car crash and music seems fuller and more expansive, while the the rest of the near impeccable track is replicated perfectly. Dialog is clean and clear throughout the film, with the music (as well as a car screeching to stop or the like) fills out the surrounds. Bass is punchy and clean, adding weight to car doors slamming and the before mentioned music, and is overall exceptionally balanced. The Big Lebowski was never designed to be a Transformers contender, but the it’s mix is well done, with a nice addition of having the wider feeling of DTS:X as a small upgrade from the previous releases.

The Big Lebowski is one of the biggest cult comedy classics of the last two decades, and has been quoted almost as much as Star Wars or Spaceballs. I can’t count how many “dudeisms” have come out of my mouth over the 20 year time span, and it has become one of my favorite go to comedies when I just want to veg out and have a good chuckle. The story is one of the Coen Brother’s best comedy films without being TOO deep (think O Brother Where Art Thou?) and has been given a FANTASTIC release by Universal. The release I have here today is the big limited edition set, which comes with a bowling ball bag, a plastic bowling ball, the 4K release, a little booklet, AND a replica rug (which really does tie the whole package together). But if you’re not wanting to spend the bigger dollars to get the limited edition, you can buy the slimmed down “discs and case only” edition HERE if you like. Still, whichever edition you get today, you can’t go wrong as this is a fantastic release rife with great extras and a stellar new transfer to get rid of the crummy Blu-ray that we’ve had for years. A definite must buy.

Great review Mike of a classic flick. This one film deserving of a 4K release!

Great review Mike of a classic flick. This one film deserving of a 4K release!
Click to expand...


and all jokes aside, it's a GREAT film. Also the very first Coen brothers film to hit 4K UHD

Thank for the review. I never saw this when it came out so will check it out.

tripplej said:
Thank for the review. I never saw this when it came out so will check it out.
Click to expand...