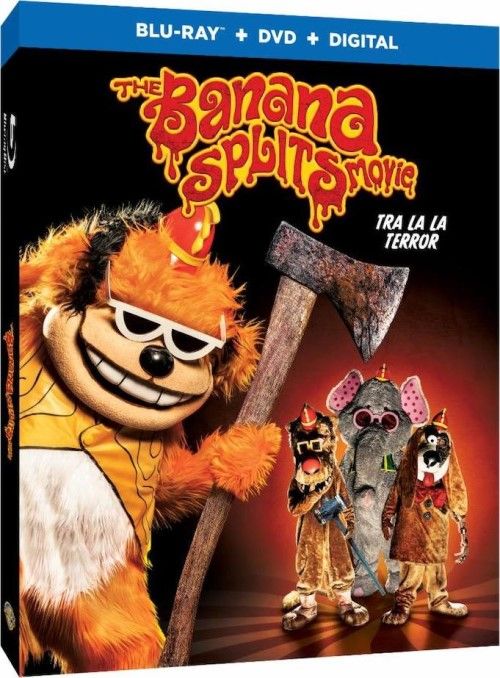 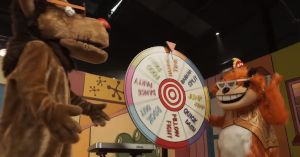 Movie
Is anyone here old enough to remember The Banana Splits Adventure Hour? For those of us who actually remember that show from ancient broadcast tapes and re-runs, The Banana Splits Adventure Hour was a silly puppet based kids show that ran from 1968-1969 with moderate results. The series was goofy, silly, and kind of a mixture of The Muppets meets Lamp Chop and Friends with a dash of Blues Clues, and was considered a marginal hit for the late 60s. Ironically, it was one of the places that Shari Lewis got her start in back before she came up with the iconic Lamp Chop character that launched her TV show back in the 1990s. Now, if you think that this The Banana Splits Movie is a continuation of that nearly 51 year old show then you have another thing coming. For some strange reason Warner Brothers greenlit a script for a horror movie about the original Banana Splits characters going on a murdering rampage, and just called it The Banana Splits Movie and pushed it out on home video.

It’s modern times, but supposedly The Banana Splits Adventure Hour (shorted to just The Banana Splits Show in the movie) has been running non-stop for the last 50 years. It’s a big children’s hit and has continued to make money for the produces all this time. The series has been kept alive by a not just puppetry, but robotics too as the original 4 Banana Splits puppet characters have been replaced by live robotic cores with their furry costumes covering them up. However, things are about to get nasty today, as not only is it a live taping where young Harley (Finlay Wojtak-Hissong) has been given backstage passes to, but the it’s also the day that the producer has pulled the plug on the show, not to mention an update gone wrong to the Banana Splits robots themselves, and I’m sure you can figure it out from there.

Things seem to be going smoothly enough, even though the only human character on the show, Stevie (Richard White) is getting drunk off his butt in an effort to dull the pain of his being laid off. That is until the Banana Splits robots go crazy, hacking and slashing their way through the audience members one by one. Now it’s up to Stevie and his mother Beth (Dani Kind) to get out of the closed down production set, and hopefully do so alive in the process. 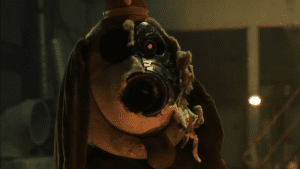 I’m not sure who the target audience for The Banana Splits Movie is aimed at really. There’s this sort of end of a generation gap where Baby Boomers ended and Gen Xer’s began that vaguely remembers growing up in the 70s and watching The Banana Splits Adventure Hour from Hanna-Barbera, and even fewer of them are probably deeply entrenched in the horror genre. However, Warner has dusted off these 4 forgotten characters and turned them into their own DTV horror franchise, and for some reason the movie actually kind of works in it’s own bizarre fashion. I’m not saying that this is some great horror movie, but I was expecting this to be a full one 1/5 rated film just judging from the trailer. In hindsight part of that guesswork was simply because I couldn’t process the classic characters as slasher killers, but even though the film is straight to DVD fodder I got a few chuckles from the bizarre nature of the film, as well as enjoyed some sloppy and gross kills.

Everything is pure DTV acting and DTV special effects, but it kind of plays to the hammy nature of the film. The kills themselves are gory and bloody as all get out, but director Danishka Esterhazy doesn’t play the movie very seriously. Instead the whole thing is kind of tongue in cheek, playing off of the nostalgia of the characters and laughing along with the characters as the OBVIOUSLY low budget kills pain the room with cherry red blood. 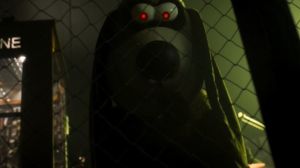 The 1.78:1 framed AVC encode for The Banana Splits Movie is more than capable of looking good on Blu-ray. The film is definitely a low budget DTV flick, complete with a rather drained color palette and some digital noise that crops up in the grayish blacks. HOWEVER, the primary and secondary colors for the puppet suit are bright and well saturated, and the ooey gooey blood scenes so lots of cherry red blood to brighten up the dull and flat looking picture. Clarity is sharp and clean for the most part, with good facial details and strong background textures (when it’s light out, the darker shots tend to look softer). I almost gave this a 3.5/5 rating for the video due to the flat look, but the detail levels and primary colors that come out once in a while kind of counter balanced that, so while I’d like to give it a 3.75/5, we’ll have to settle for a 4/5. 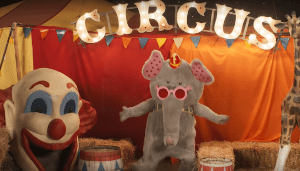 The 5.1 DTS-HD MA track is about what one would expect from a DTV horror film. It’s pretty solidly front heavy for a majority of the time, but when the 4 characters start slashing and hacking, or when the show’s loud and cherry music are blaring, the surrounds get some moderate activity. Vocal clarity is precise and cleanly replicated up in the center channels, and the subs get some boom time with body crashes, slashes and various thumps in said score. It’s a good track that does everything well enough on the “make a good horror track check list” without being overly great. 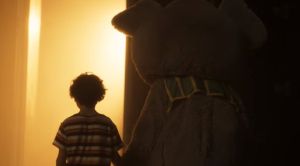 The Banana Splits Movie is a film no one asked for, no one wanted, and yet somehow got made with moderate results (kind of like the show if you think about it!). A line from the movie is “The Show isn’t really what I expected”, and that translates to this movie as well. It is bizarrely kind of fun, and a weird bit of closure that is banking on some form of nostalgia from the kids who grew up in the late 60s and early 70s to really sell the concept. I never really grew up with the show and only new about them vaguely, but even though I had older brothers who grew up in this time line, The Banana Splits Movie is one bit of intellectual property that honestly boggles the mind on who greenlit this production. The Blu-ray looks and sounds good enough for a DTV film, but sadly (or not so much if you think about it) there are only a small handful of extras to fill out the near barebones disc. If I had to put a recommendation down for this one, I’d list it as a mild cheap rental for horror fanatics who just can’t help themselves.

"The Banana Splits Movie is a film no one asked for, no one wanted, and yet somehow got made with moderate results"

Mike, that might be the single funniest summary you've ever written... and you've had A LOT of them!

lol, I live to entertain

lol, I hate to say it, but that was my reaction too when it showed up. I was terrified, but strangely desiring to see it lol

Thanks for the review. I have a desire as well to check it out..

So, I finally got around to watching this. AppleTV has it on sale in 4K Dolby Vision + Atmos. Oh yeah.