The Art of Racing in the Rain - Blu-ray Review

The Art of Racing in the Rain 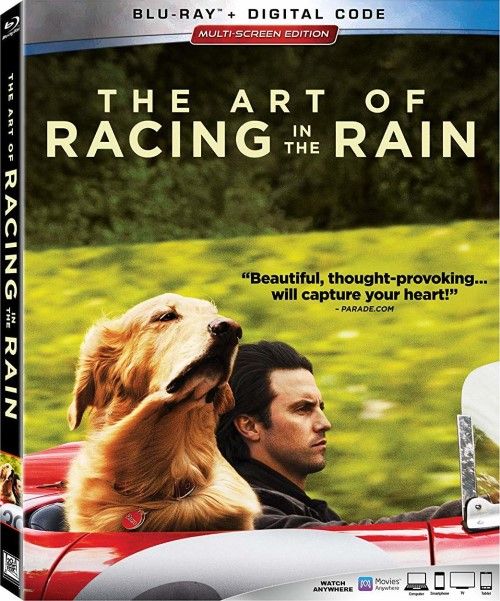 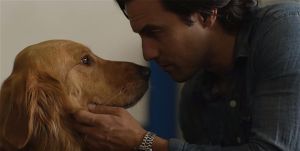 Movie
It seems that films about dogs (and other animals in minor degrees) and their relationships with the owners that adore them is becoming more and more popular with Hollywood lately. It seems that we’re in an era of rather harsh balkanization of our political parties, and America as a whole has never been so divided, so what can be more healing and unifying than cooing over cute animals. I never read the book of the same name by Garth Stein, but have puppies on the cover of your book and the promise of bawling your eyes out and I’m in the drivers seat with my two ragamuffin mutts sitting beside me while I review.

The Art of Racing in the Rain is a bit of a mixed bag though, as it takes the generalized premise of a self aware dog describing his life and that of his owner’s through his own unique lens. In this case it’s a dog called Enzo (narrated and voiced by Kevin Costner) who starts the film at the end of his life, remembering all of the good (and bad) times of his race car driver owner, Denny (Milo Ventimigilia). Starting at the beginning we find out that Enzo bonds with his human when Denny stops off at a local farm where pups are being given away, and grabs the little ball of floof on whim. Denny’s life is changed forever, as is Enzo’s, as the two become inseparable even though Denny is a Formula 1 race car driver.

Life goes on, and so does Denny’s changing heart as he meets the lovely Eve (Amanda Seyfried). Eve states that “I’m not much of a dog person” to Denny, but is soon won over by the adorable golden retriever and he become an integral part of their family life. Troubles come and troubles go (sometimes in vast quantities) with Enzo being the hero of them all. He’s the first one to realize a family member has cancer due to his nose, as well as the protector of their daughter Zoe, as well as a well placed revenge machine when he has to. All in all, this is a story about Enzo and the influence he had on his humans more than anything else. 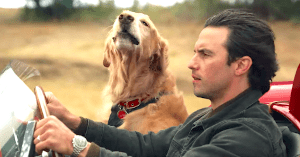 The story itself is heartwarming and charming, and anyone who loves canines as much as I do will be instantly drawn into the story and be snuffling away with the rest of them. However, there is something rather generic about the film. It hits all of the right beats, and ticks off the checkmarks to draw you in, but the movie can be incredibly depressing as you watch what happens to Denny, Eve and then poor Enzo. That and the fact that the overly poetic narration by Kevin Costner was probably much better in written prose, as it sounds extremely cheesy and over the top when narrated on screen. Costner himself is a little detached from the role, and doesn’t have the excitement and charm that Josh Gad infused into Bailey from A Dog’s Journey, and the philosophical and erudite ramblings of Enzo come across as kind of cringey in real time.

Milo does a great job as Denny though, and Amanda Seyfried is surprisingly good as Eve. Usually I write her off as the blonde bimbo in most of her movies, but she was able to place a serious and rather intelligent character for once. Costner’s portrayal of Enzo was a bit hit or miss (more due to the writing than his acting ability), and the movie itself is kind of uneven. Certain parts are really great with the bonding between Enzo and the family, while others are sloggishly depressing, and the film itself feels a bit generic at times, even though it is still well done from a technical point of view. 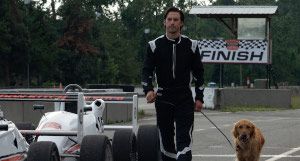 I was actually surprised that The Art of Racing in the Rain didn’t get a 4K UHD release, as the film was shot using Arri Alexa cameras (3.4K) and finished with a natural 4K master for home video. Still, the Blu-ray looks amazing on my screen, with a very natural and deeply saturated look to it. There’s not major color grading to the 1.85:1 framed image, but rather a bright and digitally glossy image with deeply saturated colors that just ooze depth and brightness at every corner. The film is mostly a sunny and glossy looking affair, with bright whites, good skin tones and a really balanced look that is appealing. The few dark scenes we have show some mild crush, but other than that this is an artifact free encode. Contrast is sharp and peppy, creating a very warm and inviting look to the movie, and the fine details are jaw dropping. All in all, this is a great looking Blu-ray and even though we don’t have a 4K UHD disc to enjoy, is very visually appealing.

The 7.1 DTS-HD MA audio mix is more than capable of delivering the goods for a drama track, and is more than a bit surprising in how boisterous it is due to the racing scenes. The majority of the film is dialog heavy and front loaded as a result, with the quality of the dialog never in question, but there are quite a few times throughout the film where the subs and the surrounds are roaring away as Denny is tearing it up on the race track. The 7.1 addition makes for neat track sounds as he whips around the circle, and is a nice upgrade over a basic 5.1 track for sure. 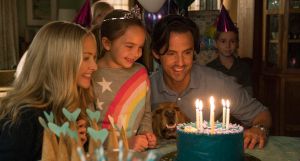 • Featurettes: A Journey to Screen
-- Directing the Art
-- Enzo Cam
-- Behind the Wheel
-- The Dog Stays in the Picture
-- Enzo's First Ride
• Audio Commentary by Director Simon Curtis

The Art of Racing in the Rain is a bit of a mixed bag film wise. I really liked the idea of another dog movie as it impacts peoples lives (as I said earlier, I’m a sucker for pupper doggos), but this was a strange film that mixed great parts, with sluggishly depressing and bland parts as well. The narration by Costner was a bit too self aware and esoterical, for my tastes. It’s a bit of a sad film, and with the unevenness of it I can’t straight out recommend it to everyone as it won’t be everyone’s cup of tea, but it is most certainly a good Blu-ray package with great video, good audio and a decent set of extras.