Thank You for your Service - Blu-ray Review

Thank You for your Service 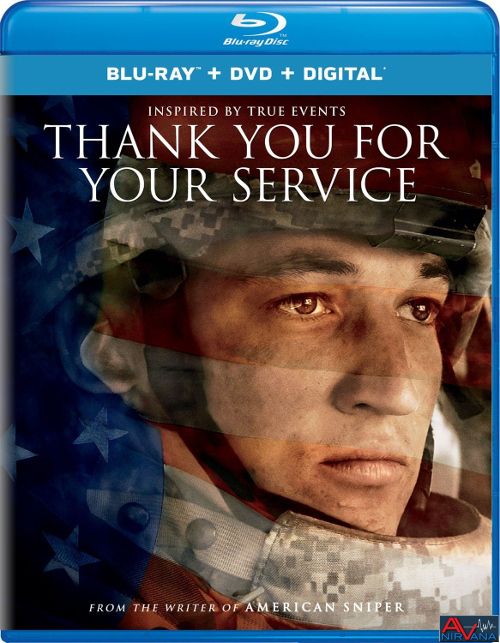 Movie
When I was introduced to the trailer for Thank You for your Service it looked like a “hoorah, America!” type of film (which I have zero problem with, as I love films like that), so I was a little surprised when I put the movie out of mind and popped it in earlier today. Instead of a movie where you’re saluting in front of the TV with a swell of patriotic pride swelling in your chest, we’re privy to a very somber look at what happens to many soldiers when they leave the service after suffering trauma. I had to watch the film over a period of 2 separate times, as the subject matter of PTSD and soldiers coming home from war is highly personal. Most of my immediate family serve, or have served at one point in the last 15 years, and I’ve had to watch two brothers come home and not be the same people that I knew when they left (both in good ways as well as bad). Thank You for your Service is an excellent film with that DOES lay it on a bit thick at times (think a bit soap operaish), but still carries the message home with a look at what it takes to recover from mental injuries.

Based off of the nonfiction book written by journalist David Finkel, Thank You for your Service follows the path of three army soldiers coming home from Iraq. Staff Sgt. Adam Schumann (Miles Teller), Specialist Tausolo Aieti (Beulah Koale) and private Billy Walker (Joe Cole) are coming back to the life of a Civvie after a near year of deployment. As much as each one is happy to be home and seem to be in good spirits, they are each battling their own demons from this last deployment. Billy comes home to an empty house, met with only the sickening realization that his fiancee has stolen everything he owned and left him high and dry. Adam comes home to loving wife Saskia (Haley Bennett) and his two children, but he is not the same as when he left. Adam is struggling with the guilt of a team mates death, and no matter how hard Saskia tries to get through, Adam suffers in silence. Tausolo has it the worst (in some ways), as he just wants to deploy again, but the explosion that decimated his squad has left the man with lingering brain damage. Brain damage that eats away at his personality and leaves him feeling like a stranger in his own skin.

Each of the three friends tries to deal with their pain in their own way. Billy pulls the most horrific way of all, exiting life way too early, while Adam and Tausolo are left to try and use each other as a crutch to limp on. Refusing to give up, Adam makes the decision for himself and Tausolo to get help, and are introduced to the giant cluster bomb of ineptness that is the VA. As they stumble around in the dark, each of the two men reaches out for help, but find that the only help that you can get, is the help that you actually fight to achieve.

Thank You for your Service is an intimate feel that had me enthralled from beginning to end, despite some flaws in the second half of the film. The red tape that the men suffered through is sadly true for many men coming home. I’ve watched it first had as the VA shuffles people around, tries their best to fit in everyone, and be a jack of all trades but master of none. It’s also much worse when you realize that the type of pain these men are suffering from can’t be healed with pain pills and a checkup by a doctor, as the wounds are much deeper and reside in the mind rather than just in the body. The title of the film itself plays into the deeper message of the movie, as we all know the familiar phrase “thank you for your service” that we extend to those who gave their time to serve. It’s all we as civilians can say, but but it doesn’t come close to covering the depth of what we should feel, and the struggles that they undergo. Wounds may not always show up on the surface, and unless you are really close them, you may never see the scars that don’t always heal.

I was SINCERELY worried about the cast when I first looked at IMDB. Miles Teller used to be the upcoming golden boy for Oscars, but the last several years have shuffled him to the side as he never caught on after his initial teenage movies dried up. Then there was Amy Schumer. Amy is the touch of death for most films, as she is a worse actor than she is a comedian (which isn’t saying much these days) and whatever she touches just turns to disaster when it comes to movies. Luckily my fears from both characters were laid to rest, as Teller gives a touching performance and Schumer is relegated to maybe 5 minutes of screen time MAX (although her delivery of her lines are pretty awful). Actually, all three of the men portraying the soldiers came across as incredibly believable (and that is saying something, as they gave some heart wrenching performances). My only complaint that kept this movie from being a 4.5/5 was due to the fact that there was almost TOO much melodrama. I’m not trying to belittle the pain veterans go through, but the narrative itself tries to cram too much drama from the characters in too short of time, and it seems overwhelming and kind of cheesy at times. It’s not a big complaint, as the movie is a great watch, but by the time the second half comes around you can start to see those little cliches being fed into the story.

Thank You for your Service is shot digitally, as is the case with most new films, and it gives us an excellent viewing template to enjoy today. The 2.39:1 framed film looks very clean and clear, without that glossy, flat, look that so many digital films fall prey to. Colors are warm and inviting, with a natural grading to them that never feels stylized or out of place. Intimate facial details, and things like mud on boots and other clothing disruptions are easily noticeable to the naked eye, and even long shots look appropriately sharp and clean. I did notice that some of the darker, night time, shots had some soft black levels that smeared just a bit (banding was almost imperceptible, but crush was apparent). Overall clarity is usually excellent, and the mild softness that is applied to the film is never obtrusive or expunges details that are necessary (except the frustrating black levels that I mentioned).

For a talky film like this one, I was a bit impressed that Universal gave it a 7.1 DTS-HD MA mix, as I wouldn’t expect it to be wildly dynamic. Sadly it is a bit overkill, as most of the time the film is very dialog driven, with a lot of time spent in the front of the room. However, there are several flashbacks to Iraq that really bring out the ferocity of a 7.1 track, with gunfire blasting all around, as well as thunderous LFE to bring it home. Even the score has that ominous and tense feeling that uses a bit more bass than your average drama. Dialog is well placed in the center channel, and evenly balanced with the rest of the track with zero imperfections that I could hear. As I said, the 7.1 feels a bit like overkill much of the time, but when the action comes out to play it really utilizes all 8 channels with much aplomb.

• Staging a War
• The Battle at Home

As I said in the beginning of this review. With the phrase “from the writer of American Sniper” plastered on the front of the Blu-ray, I was excepting a much more traditional war story, rather than what we got. That in no way is a negative thing, as I feel that the traditional “hoorah” war stories have become common place, and the focus on PTSD in a very serious and respectful manner makes for an amazing watch (Shia LaBeouf’s Man Down unfortunately didn’t come close to doing the subject matter justice) nonetheless. Universal’s Blu-ray release is well done, with great audio and video, but only very minimal extras. While it’s not a PERFECT film, it is a great watch and I thoroughly enjoyed it. Recommended as a good watch.

Thanks for the review. Will try and catch this one.

This looks like an interesting watch... I have no memory of this making the rounds through theaters!

It came out right about Halloween time, so it got overshadowed by the horror hits like IT sadly

Thanks for the review. I will give it a rent.

I think I'll be renting also

I think you'll enjoy it Todd. It's a good drama

Right now my ears - and my home - are still recovering from 10 Cloverfield Ln. Hopefully will be ready to get back into the driver's seat this wknd!