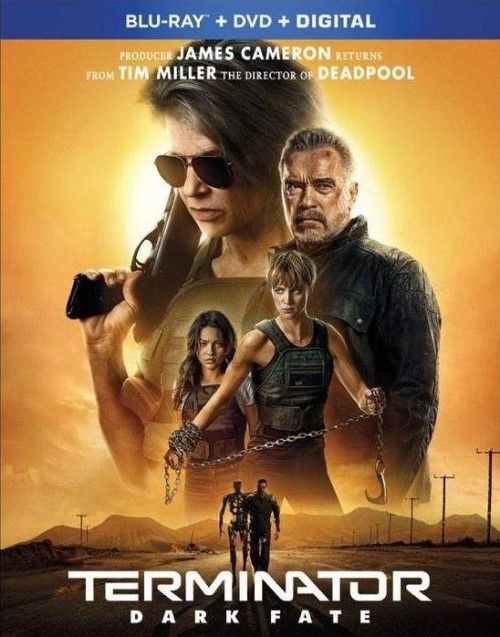 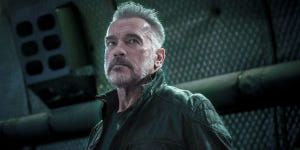 Movie
The Terminator franchise has most definitely been on shaky ground ever since the early 90s. James Cameron gave us a fantastic 80s thriller in Terminator, and an even better (one of the few sequels where it out paced the original) sequel in Terminator 2, only to fizzle at the box office when someone else took the helm and gave us Terminator 3: Rise of the Machines. Now, I’m going to stop you right there, as I actually thought that Terminator 3: Rise of the Machines was maligned a bit too much. I get it. It’s hard to top the incredible ending of Terminator 2, and the concept of fate being something you can’t run from was totally antithetical to James Cameron’s theme of being the master of your own fate from the first two movies. Still, out of all the post Terminator 2 sequels, it was the one that felt the MOST like a Terminator movie. Arnie was still ripped as all get out, and could play the titular killing machine with the impassioned humor that made him so loved from the 80s and 90s, and Nick Stahl wasn’t too bad of a John Conner.

That being said, the next several films tried desperately to revive the franchise, but the franchise spinoff’s were……..wait for it…..terminated (sorry, I couldn’t help it) after each new film. Terminator: Salvation had a great concept. Go forward in time to the actual resistance, but was met with very mediocre audience reception. Paramount realized they were going in the wrong direction, and ruminated until they came up with Terminator: Genesis. Now I’m not going to lie. Genesis was actually a really neat concept and did decently at the box office. They took some risks and completely changed up the future (even more drastically than the twist ending of Salvation), turning John into a villain, and adding some mystery layers with Pops and the other terminators. HOWEVER, Emilia Clarke and Jai Courtney has about as much charisma as drying paste, so sadly the concepts that they opened up in that film was left to rot.

Then came along Terminator: Dark Fate, the supposed savior of the franchise. This was the first time that James Cameron had come back to the creators chair as he was the driving production force behind the film. Cameron decided to scrap the previous 3 films from the canon and write a direct sequel to Terminator 2, and even gave the directing reigns to Deadpool’s Tim Miller. Needless to say, I was a bit excited about the return of Cameron and who he chose to direct the film, so I got my butt in theaters day one for this epic event…..only to be left sadly disappointed.

The film opens up with a flashback to Sarah Conner (Linda Hamilton) screaming to the good doctor in the psych ward about the upcoming apocalypse, only to jump to an older Sarah recounting about the events after they saved humanity. Slightly huge spoiler, but it’s in the first 5 minutes of the film so it can’t be helped. After John and Sarah destroyed the T101 and all the processing chips to Skynet, the world was at peace. However, Skynet had created a contingency plan. The T101 that they faced was only one of several terminaters that were sent back simultaneously. A few years later one of them caught up with the pair and terminated John, despite the fact that his future no longer existed. 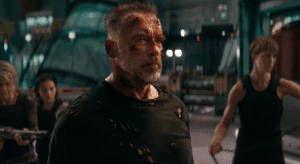 Shifting gears we get to see a new pair of future time travelers zap into our time line. This time it’s a cyberneticly enhanced soldier from the future named Grace (Makenzie Davis), and a new Terminator (played by Diego Luna). Their target is no longer the Conner’s, but rather a young girl named Dani Ramos (Natalie Reyes) living in Mexico. The cycle begins again as the Terminator tries to kill the poor girl, only to be rescued by Grace. However, as cybernetic as she is, Grace is no match for the upgraded Terminator that went through the portal after Dani, and is about to be killed before an aged Sarah Conner comes out of nowhere and lays down some cover fire.

Long story short, This is a remake of Terminator 2 in more ways than one. With some heavy handed backstory by both Sarah and Grace, the audience learns that Judgement day DID happen. Except it wasn’t skynet. Sarah and John had successfully derailed skynet’s plans, but years later some OTHER AI came to be, and did the exact same thing as Skynet, just calling itself Legion instead. Dani is of course the next John Conner, and Grace is the Kyle Reese (with some upgrades)/ T101 sent back in time to protect her. Now Grace and Sarah have to team up to defeat the monster before he can finish his mission and doom the whole world…..again.

Terminator: Dark Fate is NOT an awful film. But it is most certainly a movie that makes you stop, look at just what happened, and wonder WHY this entire thing was necessary. Supposedly there was some drama going on behind the scenes with Tim Miller and James Cameron, with both parties being rather upset at the other (who knows whose fault it really is, we may never know), but the end result is a movie that literally treads water and remakes what came before it after promising that the franchise was going to move forward. Despite their flaws and hiccups, Terminator: Salvation and Terminator: Genesis actually put forth some interesting twists about he future. Bad acting aside, Genesis actually created an alternate time line type scenario that allowed for SOOOOO much more to be possible, but Terminator: Dark Fate is nothing but a remake of Terminator and Terminator 2. I mean, you can’t honestly say with a straight face that just because the new villain is called Legion that they aren’t a direct clone of Skynet? The entire film is nothing be remaking Cameron’s original sequel, even going so far as to have Arnie reprise his role as one of the original T101’s and help Sarah keep the NEW John Conner alive.

Acting wise this is a very mixed bag. I LOVED having Linda Hamilton back in the saddle as Sarah Conner. In fact, she was easily the best part of the entire movie. She’s tough, rough, and it’s fantastic to see the original heroine of the first two movies alive and kicking. She chewed the scenery a bit (the “I’ll be back” line was pretty cringey), but still was great to watch. Arnie, well, I knew he wasn’t going to be a MAJOR part from the get go, but he was honestly disappointing. The direction they took his character felt so out of place with the films that we’d seen before that even his mild humor wasn’t appropriate. Don’t get me wrong, I really enjoy Arnie, and he was definitely needed for the film (there is no Terminator without Arnold in my opinion), but his role just didn’t feel organic. The real big disappointments were Mackenzie Davis and Natalie Reyes. Davis was ok as the super soldier from the future, but she was still kind of bland. I’m sure that Reyes is a fine actress in her own right, but the lines she was given, and the delivery of said lines was SOOOOOOOOOO bad that it actually hurt whenever she got all amped up and tried to give a speech.

Rated R for violence throughout, language and brief nudity 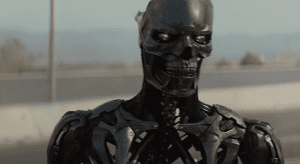 The Blu-ray is near perfect, and one of the better looking Paramount releases outside of Gemini Man recently. Shot on Arri Alexa cameras and transferred to a 4K master before being downscaled to 1080p, the digital film looks simply superb. The heavily stylized color palette leans towards cool blues most of the time, but infuses earthy tones down in Mexico, as well as a heavy layer of shadow during the many night sequences. Blacks are deep and inky as can be, and I didn’t notice any major banding at all. I DID notice a little bit of crush, but it wasn’t a huge amount, and really didn’t cause any major issues. Fine detailing along clothing is well defined, and the backdrops such as the stone river dam, or the fine mesh wiring of the detainment camp are all crystal clear. 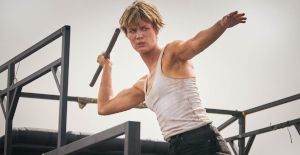 The Terminator franchise has always had great audio, and this release is no different. Paramount’s stellar Dolby Atmos track just gets right to the meat of the issue and tears it up with gusto. The track is a mixture of frenetic action and quiet dialog, and the mix gives both equal amounts of detail. Quieter dialog heavy moments are clean and clear, devoid of any heavy scoring or LFE, only to jump into full swing once the action kicks up. The Atmos capabilities of the track are on full display, as the Terminator and the action fly around the sound stage from all angle. The roar of a helicopter thumps over head, while the shrieking sound of rending claws on metal screeches from the sides and front. LFE is deep and powerful, shaking the entire foundation when called upon, and accentuating the typical Terminator score quite nicely. Needless to say, this is the best part of the entire package, and a thrilling audio experience as well. 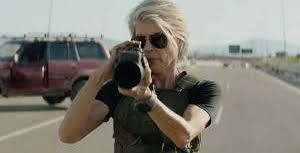 Honestly, Terminator: Dark Fate is the quintessential definition of an unneeded film, and most likely the last Terminator film we’ll see considering that Arnie is aging quite a bit at this point, and the movie dive bombed badly at the box office. The powers that be have tried so valiantly to continue the Terminator legacy on past Cameron’s first two movies, but just about every movie has met with failure at the box office. For me personally I end the series at Terminator 3: Rise of the Machines because it was the last movie that really felt like canon, but the three films that have come after it has been one botched failure after another to revitalize a franchise that really didn’t NEED to be a franchise. Terminator 2 is still the peak ending that the series has had, and ended it so perfectly that I’m comfortable just letting series quietly end now, ignoring the other films that tried to reboot, or continue, the series in another direction. Paramount’s Blu-ray disc is stunning in terms of technical specs though. Audio and video are awesome, but sadly a bit limited in extras. I can’t really recommend Dark Fate as a great film, but it’s fun enough if you’ve enjoyed Salvation and Genesis in the past. Decent enough watch is what I would say.

Thanks for the review. I agree, the T3 movie was where they should have ended it. Now, it is just rehashing over and over. I do like the series, so will check it out once available on amazon prime/netflix.

Thank you for the review @Michael Scott

I agree with you guys on the story. Story was same ol but I do have to say the video was great and the sound had amazing LFE and not sloppy rumbling. There’s constant hard hitting moments in this film that put a smile on my face! Just as you said @Michael Scott foundation was shaking. When a film makes my basement theater concrete floor shake like that it’s a winner.