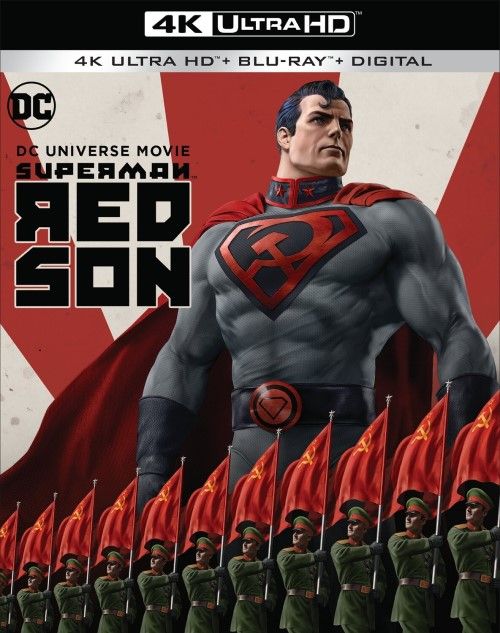 Warner Provides The 4K UHD disc for this review
​ 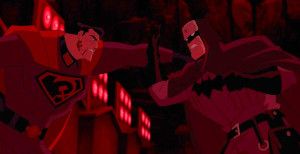 Movie
Superman: Red Son is another in the growing list of DCAU “elseworlds” stories. A set of alternate reality stories that allow the comic book writers to play with canonical superheroes in ways that they normally wouldn’t have been able to thanks to how characters have been written for decades (if not nearly a century for some characters). The 2003 three issue comic run from Mark Millar was a fantastic little trio of comic stories, and was a nice throwback to the days of olden Bolshevik commie villains as well. It even spawned a 2009 motion comic run, as well as the story being told in animated form back in the Bruce Timm days. However, translating the comic book to film was done a bit awkwardly here, and while it is sometimes a compelling animated film, the jarring changes to the story line seem out of place and reduce the impact of the original story.

The story starts us off back in 1955, with Kal-El’s spaceship being thrown off course by several hours, causing him to land in what is known as the Soviet Union instead of in Kansas. There he is raised on a collective farm until it’s discovered that he has his super powers. Then he’s handed over to the all powerful Stalin, who uses the boy’s incredible powers as a symbol for Soviet Russia, as well as a tool to keep the lay people in line who don’t see the benefit of the “glorious” communist regime. However, Superman’s innate purity finally sees through the lies of Stalin, executing him for putting people in Gulags and turning the Soviet Union around.

Years later Superman’s (voiced by Jason Isaacs) goal is nearly implemented. He’s united the east, Taken over parts of Asia in his glorious quest for world peace, and even defeated the all powerful Brainiac who tried to capture part of Moscow. However, his reign is not exactly innocent either. While he doesn’t put people in gulags or force them into labor camps, he “peacefully” is able to subdue those who rise up against him through brain washing and Brainiac’s technology. 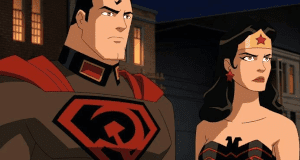 Simultaneously the west is not about to fall to the power of the Red Superman, and have implemented their own defense. A young Lex Luthor sees the rise of Superman to power in the 50s, and with his wife Lois Lane (Amy Acker), begins constructing various anti-Superman weapons such as a replicant Superman, an army of Green Lanterns, and various technological marvels to keep the alien overlord from destroying the United States and all she stands for.

The original 3 comic issue of Superman: Red Son was a great set of comics, and had a very nuanced look at nurture vs. nature. It was originally a critique against communism and the social climb of the Soviet Union, criticizing and heavily ostracizing that sort of fascist rule, just seen through the lens of Superman. This film adaptation feels a bit more like The west’s fascism vs. east’s communism, and has lost many of the nuances of the critique in favor of a more action packed 84 minute adventure. There have been several major changes to the story as well, some working for the shorter film, while others are jarring and not really needed. One of the major ones is them turning Princess Diana gay for no apparent reason, and robbing the story the whole “jilted lover” routine from the comics, which kind of loses the impact when the bitter and angry Amazonian turns her back on Superman. It’s not a horrible thing, but it does come across as doing something just to garner “points” with a certain demographic, and not really caring about the narrative fall out from said change.

There’s a super violent change about half way through that I won’t spoil, but it also feels a bit odd. The biggest one is actually the ending though. The whole time travel, closed loop, ending is really shortened and condensed. A move which leaves the “aha!” ending rather trite and typical, instead of the really neat psychological twist it was afforded in the comics. Still, the story is fun, the base theme of the comics are translated well, and it’s rather compelling narrative at times. Not the best of the DCAU, but not the worst either. Rather a middle ground one that just doesn’t reach it’s potential. 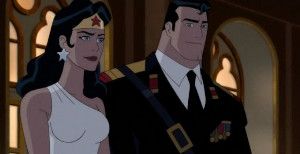 As I mentioned in the Blu-ray review, watching the Blu-ray and the 4K UHD discs back to back made some startling discoveries on my end. I’m used to the 4K UHD discs of the DC animated films to show low to moderate upgrades, with only the very recent films taking advantage of HDR fully. This one is the exact opposite, where the Blu-ray looks good on disc, but the 4K disc looks GREAT. The detail levels aren’t going to show a massive improvement, but the fine tuning and cleaning up the disc are stellar. The film was an 2K-4K upscale from the source material, but gone are all the banding and digital noise that I noticed on the Blu-ray. The image is much cleaner and clearer with those gone, and the colors really pop off the screen with the added HDR. They were very nice on the Blu-ray, but those contrasting Greens, blues and reds really shine here. The image is sharp and clean, without the artifacting and those nuances really make the disc stand head and shoulders over it’s 1080p brethren. Usually I’m not one to really recommend the 4K of a Warner DCAU film over the Blu-ray that much, but in this case it’s easily the best presentation of the movie, and a stunning one at that. 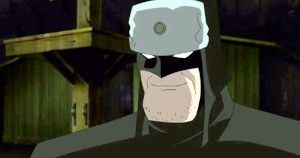 The 5.1 DTS-HD MA track (found on both the 4K UHD disc and the Blu-ray discs) is bombastic, powerful, and full of life. It’s pretty typical of the DCAU films to not include and Atmos track, so don’t that that as a massive negative. This mix is still full of life and makes full use of the surrounds to make a fully immersive and engaging action track to enjoy. The power and heft of Superman’s battles are undeniable, with screaming shock waves, sonic booms that shake the floor with deep base, and wild use of the surrounds as he whizzes around the screen. The dialog is still crystal clear and perfectly heard at all times, and the dynamic range is crushingly wide. Some moments are quiet and soft with dialog, only to erupt into a massive battle that leaves your home theater pulsating from the after effects at a moments notice. 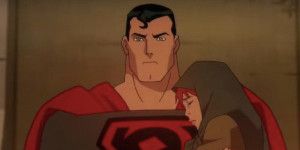 • DC Showcase: Phantom Stranger (Animated Short) – Animation legend Bruce Timm helms Phantom Stranger as both executive producer & director from a script written by Ernie Altbacker (Teen Titans: The Judas Contract). Set in the 1970s, the short follows young adult Jess as she joins her friends at a party in a dilapidated mansion hosted by the mysterious Seth … when odd things begin to happen to Jess and her friends, can Phantom Stranger intervene? Peter Serafinowicz (The Tick) gives voice to Phantom Stranger, and Michael Rosenbaum (Smallville, Impastor) provides the voice of Seth. Phantom Stranger also features the voices of Natalie Lander, Grey Griffin and Roger Craig Smith.
• Cold Red War (New Featurette) – An exploration of the Cold War through the lens of the Elseworlds classic Superman: Red Son, as Superman rises to power and tension escalates between the United States and the Soviet Union.
• Two episodes from Superman: Red Son – The Motion Comics.
• A Sneak Peek at the next DC Universe Movie, Justice League Dark: Apokolips War – An advanced look at the next animated film in the popular DC Universe Movies collection.
• Trailers

While it suffers from being lesser than it’s comic book source material and some pacing issues, Superman: Red Son has some really good action sequences and a great score to compliment good voice acting. The visuals and take on Superman’s history is very unique, adding a different layer to our understanding of the man of steel, but I also would have liked more dissection of the whole “nurture vs. nature” conundrum that makes up Superman’s core. They almost seemed to ignore the whole Kent family being a MASSIVE impact on his moral compass, and just played it off as a part of his nature, something which I would have really enjoyed more time to explore here. As an elseworlds story it’s solid on it’s own, but as I said above, definitely weaker than the source material. The 4K UHD disc is a VERY solid upgrade over the Blu-ray, and easily the best the film looks on home video.. Decent Rental for DCAU fans.