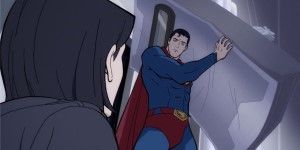 Movie
According to early interviews (which are now deemed misinterpretation of director Chris Palmer’s words) Superman: Man of Tomorrow looked like it was about to start off a new cinematic universe for the DC animated films. It’s tonally different than the canonical films of the last few years, and doesn’t seem to be an “elseworlds” film either. However, Chris Palmer and DC themselves have both confirmed that this outing was just them toying with the original characters and their history a bit. Nothing more, nothing last. Part of me is kind of happy that we’re sticking with the DCAU that we’ve had for about 7 or so years, but a part of me really liked the changes made to a few pertinent characters, and would have loved to have seen this universe expanded more. Either way, Superman: Man of Tomorrow is a fun little jaunt that aims to put viewers right at the era where Superman makes his appearance to Metropolis.

The characters are the ones we know and love, but there’s been some changes. We meet Clark Kent/Superman (Darren Criss) just after he’s moved to Metropolis and taken up working for the Daily Planet. His super powers are mostly known, but he’s still flexing his proverbial muscles and working out the kinks of his new life. However, things change quickly for the fledgling superhero when Earth is visited by ANOTHER alien in the form of bounty hunter extraordinaire, Lobo (Ryan Hurst), who is after the last surviving Kryptonian (for an unknown buyer). The two’s battle turns ugly, and Lobo unintentionally ends up turning a simple janitor into an energy sucking vampire. 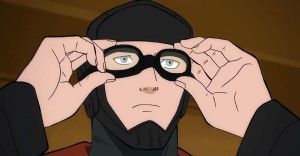 This new being is growing more powerful by the day, sucking up all the energy everyone throws at it, and only becomes more powerful. That means Superman’s powers are nearly useless as the more he hits it, the more it gets stronger. So the man of steel has to do something he doesn’t exactly want to. Team up with Lex Luthor (Zachary Quinto) and Lobo in order to take out the creature once and for all.

The overall story with the mutated energy vampire villain is actually the weakest part of the story. It’s a solid one off villain, but the battle is something we’ve all seen before, and resembles the Doomsday battle in Batman v. Superman from a few years back. Really it’s the side characters and relationships that make the film a lot of fun. Lobo is always pure unadulterated gross fun, and the way Martian Manhunter is introduced is quite stylistic. The film itself is also a little darker than your typical DCAU film,(it has Lobo in it, what did you expect) with decapitations, chopped up body parts, and empty husks when the energy vampire is through with someone. It’s not full on R-rated by a good margin, but it embraces a darker and more violent tone that is kind of welcomed, as it uses more of the Bruce Timm style of old school visuals, instead of the New 52 style that is most often associated with darker and heavier rated DC animated films.

While it’s not exactly old school classic Bruce Timm style animation, Superman: Man of Tomorrow looks surprisingly more similar to that era than the New 52 style of modern days. The film is rather bright and shiny, with bold colors and colorful outlines to characters. Primary shades are rich and well saturated, and the film is devoid of the banding that is so prevalent to most Warner Brothers movies, and has a nice flat 2D look to the animation style. It’s not overly detailed, but the detail level on the artwork is above reproach. All the lines are clean and clear, and faces outfits show appropriate clarity. Black levels are deep and inky and the film actually makes nice use of the HDR (something many of the older DCAU films suffered when they first put out 4K UHD discs). A great looking disc for sure, and a nice upgrade over the great Blu-ray too. 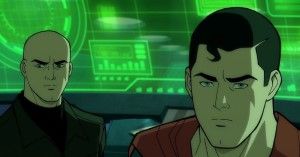 The 5.1 DTS-HD MA track (found on both the Blu-ray and the 4K UHD disc) is a good mix, but never one that really strives to be a stunner. Action is fast and furious throughout the flick, and the surround channels are made good use of. Supes swooshing around, or Lobo’s space chopper roars from one end of the soundstage to the other. Dialog is always well done and cleanly located up front, and LFE nice and active. The bass is a bit muted from what I would have liked though, and sometimes I noticed a minor dip in dialog volume here and there. Not a GREAT mix, but a very capable one that more than pulls its weight.
. 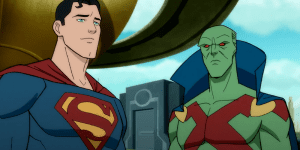 • Lobo: Natural Force of Chaos (New Featurette) – He's the rude, crude, galactic bounty hunter who has been more than a thorn in the side of DC's greatest heroes. This is a full throttle look at Lobo.
• Martian Manhunter: Lost and Found (New Featurette) – This is the personal journey of J'onn J'onzz. A stranger in a strange land who emerges from the shadows as a force for peace and justice.
• Look Back: Justice League vs. The Fatal Five (Featurette) – The Earth's future hangs in the balance when the Justice League faces a powerful new threat – the Fatal Five. Superman, Batman and Wonder Woman seek answers as the time-traveling trio of Mano, Persuader and Tharok terrorize Metropolis in search of budding Green Lantern, Jessica Cruz – whom they need to be able to free remaining Fatal Five members Emerald Empress and Validus in order to carry out their sinister plan. But the Justice League discover an ally from another time in the peculiar Star Boy – brimming with volatile power, could he be the key to thwarting the Fatal Five? An epic battle against ultimate evil awaits!
• Look Back: Superman/Batman: Public Enemies (Featurette) – Based on the popular Jeph Loeb/Ed McGuinness comic series/graphic novel, the film finds United States President Lex Luthor using the oncoming trajectory of a Kryptonite asteroid to frame Superman and declare a $1 billion bounty on the heads of the Man of Steel and his "partner in crime," Batman. Heroes and villains alike launch a relentless pursuit of Superman and Batman, who must unite – and recruit help – to stave off the action-packed onslaught, stop the asteroid, and uncover Luthor's devious plot to take command of far more than North America.
• From the DC Vault: Superman: The Animated Series, "The Main Man, Part I"
• From the DC Vault: Superman: The Animated Series, "The Main Man, Part II"
• Movie trailers:
- Justice League Dark: Apokolips War
- Mortal Kombat Legends: Scorpion's Revenge
- Superman: Red Son
• A Sneak Peek at the next DC Universe Movie – An advanced look at the next animated film in the popular DC Universe Movies collection.

Superman: Man of Tomorrow hovers in the balance between the world of old, and a new interpretation. It holds much of the same art style and same characters that we’ve all known, but tweaks them just enough to make them new and interesting. It’s nice to see Kal-El as a young man who hasn’t come into his own just yet, and adding Lobo into the mix is never a bad idea (he reminds me of the Lobo from Superman: The Animated Series blended with the Lobo of the live action Krypton show). The art is beautiful and the 4K UHD disc is a visual treat for sure.