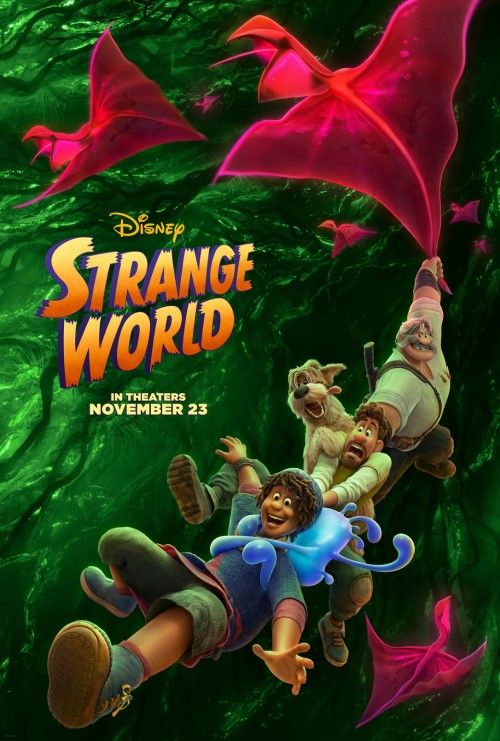 Movie
Poor Disney has been taking it on the nose lately. Marvel films have been getting sub par reviews and box office turnouts (despite making reasonable profits), their TV shows are getting more and more generic and “next product” feeling by the day. But nothing was as big of a box office blow to the chin than 2022’s Strange World. Losing roughly 100 million dollars, the generic animated film was probably the single biggest loss they’ve had since the stumbling of the 1990s with films like Treasure Planet and Atlantis DTV sequels dive bombing left and right. It didn’t help that critics of the film on the right were lambasting it for being one of the “wokest” films of the decade, and with the contention between left and right political parties, the film just got lost in a sea of poor marketing and controversies, barely garnering $27 million domestically on a $130 million budget (and that’s before marketing etc). Needless to say, I was curious to see just how good, bad, or ugly the film really was waiting for the home/digital release.

Strange World opens up with Alan Tudyk narrating about the exploits of the great Jaeger Clade (Dennis Quaid) was, and showing him and his son Searcher (Jake Gyllenhaal) looking to get over the mountains in order to save his fair city. However, Searcher was not like his dad. Unlike Jaeger, Searcher was more inclined to see what was in front of his face, instead of a giant world to explore. In a disagreement about what to explore, Jaeger went over the mountains (never to be seen from again) while Searcher took back a strange new plant that they dubbed “Pando” to dissect further. Turns out Searcher was right. Pando became one of the biggest discoveries of their time, turning the world of Avalonia into a beautiful utopia thanks to the unlimited energy that Pando could produce.

However, things turn south when Pando starts dying and wilting on the vine over the nation of Avalonia. Researchers have discovered that the plant has a single nervous system of roots that travels deep underground, and now it’s up to Searcher and a group of scientists to head underground and figure out what’s killing the plant before it’s too late and their unlimited energy is depleted. As you can guess, things go sideways, with the scientific crew punching through a hole in the earth and finding out that there is an entire world on the inside of the planet core (serious Journey to the Center of the Earth or Jurassic World vibes).

Honestly, I’m conflicted on this one. On the surface it’s a fairly generic sci-fi remake of Journey to the Center of the Earth with modern sci-fi tropes, but there’s also a LOOOOOOT of missteps along the way, including some acquiescence that yeah, this is rather “woke” (to use the popular term). Usually I find that things that get hyped up as “woke” in the public sphere tends to be an exaggeration. Some elements of non stereotypical relationships or themes get blown out of proportion, and suddenly it’s a big kerfluffle in the news. This time, it’s kind of blatant and in your face, especially if you’re of a more conservative person in both politics and ethical points of view. We’ve got a gay relationship between Searcher's son Ethan (Jaboukie White-Young) that is thrown in there for absolutely no reason (seriously, it serves nothing to the story and never even remotely gets resolved. It feels like it was thrown in there for someone to mark off a check mark). There’s a three legged dog, a weird sense of highly forced diversity in the ethnicity of the cast, and about all we’re missing is someone claiming to be neurodivergent and you have have the holy trifecta going on. Most of these issues are actually very minimal in the grand scheme of themes, but due to the fact that they all pretty much feel like they’re thrown in there SIMPLY because someone wanted to say “seee!!! we have representation!” makes it appear as if the right actually has something to hold onto this time.

That being said, the real problem in the film is that it’s completely generic. We have themes of collaborating in the face of difficult situations with people you normally would disagree with. Some commentary on various types of masculinity, but it never goes beyond skin deep. The story just scratches the surface and pretends to ask hard questions, when all it does is create easy answers and shuffle them under the table to be ignored for later. It didn’t help in the slightest that Disney was basically radio silent on the marketing either. Most people I knew didn’t even hear about the movie unless they were watching a preview on Hulu or something. Nobody knew ANYTHING about the film, and it came and went from it’s winter theatrical run with only a fraction of the audience actually going to see it. Sad, but it is what it is.

As usual I’m not going to give an official score for the 4K stream due to the fact that the digital copy I received is very much bandwidth dependent, but needless to say, the film looks AMAZING on my 85 inch 4K TV. The film is lusciously animated with a cornucopia of vibrant neon infused colors, ranging from blues, to pinks, to bright neon green and anything in between. Dolby Vision is perfect, with deep saturation levels and amazing blacks that just oooooze deep and inky. Fine details are incredible, and even with a few bandwidth hits (my Comcast speeds were acting wonky or else my router was, as I noticed some buffering that was unusual) this is just an amazing looking digital transfer. I have no doubts that next month’s physical releases will be stunning.

The Atmos track found on board is solid, but also have a few Atmouse weaknesses as well. The surround usage is light and airy, with a dynamic ability to simply flit from one corner of the room to the other. The overheads are rather nice as well, with a strong sense of ambient noises coming overhead as the plane lands, or the creatures attack from above. I did have to boost the track a goodly bit to get a good sense of bass or volume boost out of the track, but when calibrated to reference levels it hits pretty solid. The dynamic range is sort of flat though, as there’s not a whole lot of peaks and valleys to experience throughout. Basic modern Disney track if you ask me.

• Anatomy of a Scene: Creating A Strange World – Learn about Walt Disney Animation Studios' creative process through a single, visually stunning scene as the filmmaking team puts all of their imagination – and more – on the screen.
• Strange Science – Jaboukie Young-White (voice of Ethan Clade) hosts an exploration of how Walt Disney Animation Studios artists were inspired by real science to create Strange World.
• Creature Feature – Journey into the world beneath Avalonia and meet some of the terrifying, slimy, gassy – and sometimes cute – creatures that inhabit this Strange World.
• The Hidden Secrets of Strange World – Uncover the references and characters from some of your favorite Walt Disney Animation Studios films hidden throughout the film, along with some fun facts and behind–the–scenes stories of how Strange World was made.
• Outtakes – Go behind the glass as we join the cast of Strange World inside the recording booth for some fun, flubs and outtakes.
• Deleted Scenes
-- The Ballad of Jaeger Clade
-- Lightning Lynx
-- Funerals and Promises
-- Ethan and Searcher

Is Strange World a bad movie? I don’t think so. It’s heavily flawed with a weak story, poor marketing, and a general feeling that Disney saw the test screenings of the film and just decided to not pour any effort into hyping it up before dumping it on the theatrical market. At the end of the day it’s a generic animated film with GORGEOUS animation (and lovely 3D from what I hear in the theatrical release), but one that also makes Disney’s Treasure Planet look like a masterpiece in comparison. Low rental is my personal recommendation.

Thanks for the review.