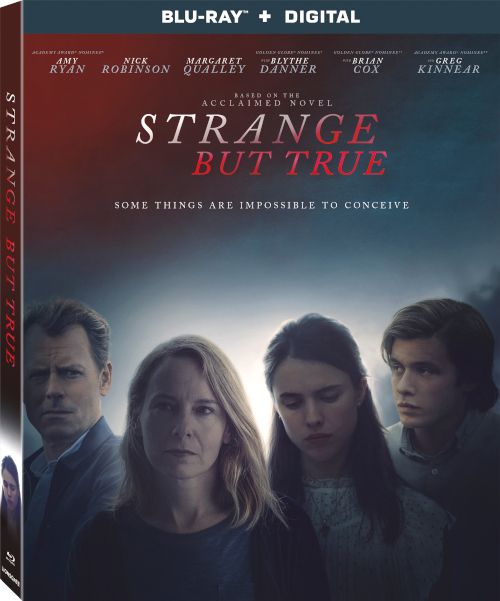 Movie
I’m going to admit right off the bat that I didn’t even pay attention to Strange But True even when I got the press release. I saw the title, skimmed the description, and said to myself “could be interesting” and then asked to review it. I didn’t even watch the trailer myself, so I went in about as virgin as one could be to a situation like this. I originally thought that this was most likely going to be a religious film based upon the premise of a young girl claiming that she’s pregnant with her dead boyfriend’s baby of 5 years ago, but then I was completely floored by the 3rd act twist. A twist that changes things up dramatically and turns it towards a direction I was NOT expecting. The movie itself is based upon an acclaimed novel by John Searles, and while I haven’t read the book (obviously), the movie itself is a bit turgid and slow, ending with me sitting there saying to myself “ok, is that it?”.

A family is getting over the grief of a lost family member when they get an unexpected surprise. The girlfriend of their brother/son Ronnie (Conner Jessup) comes to them with an announcement. She’s pregnant with Ronnie’s child and expecting soon. The thing is, Ronnie died FIVE years ago! Naturally other Charlene (Amy Ryan) takes Melissa’s (Margaret Qualley) dubious claims with huge suspicion. Ronnie’s brother Phillip (Nick Robinson) is a bit more sympathetic to the young girl, but still doesn’t exactly believe her. The bitter, and still grieving, Charlene quickly goes to find out what could have happened, employing the help of her ex husband Richard (Greg Kinnear) into her suspicious digging. While they both would LIKE to believe that there is a miracle of God going on, the sheer logic of immaculate conception is mind boggling.

Both Charlene and Phillip are adamant about getting answers, but the more they press, the more Phillip believes that Melissa is telling the truth. At least that she BELIEVES that this is Ronnie’s child, no matter how inconceivable as that may be. As the mother and son slowly inch their way to the truth, they accidentally stumble upon a web of lies and deceit that completely upends the entire situation, putting them right into the middle of a dangerous cover up that the perpetrator will do ANYTHING to keep quiet.

Strange But True is told with a mixture of chronological time leaps, most of which occurs in the present, but occasionally flitting back to when Ronnie died so that we can see what happened to him that fateful night. The movie tries to play itself out as a mystery thriller, but the problem is that the audience really isn’t engaged with the characters. The plodding script just lays out everything that happens in a simple wrapped up bow, introducing us to characters and more characters, and by the time we get slapped in the face by the twist ending, the audience is scratching their heads saying “I’m not sure, but I’m think I was supposed to be emotionally invested in this”?.

The story is a bit thin, and the twists and turns more than a bit weak, and while I’ve been told (and read) that the novel is very intense, the drama here is almost nonexistent. Until the very end the tension is that of a religious miracle movie, as people are just trying to come to grips with the reality of Melissa maybe carrying their dead son’s child. Even veteran actors like Brian Cox and Blythe Danner do their best, but are sadly just hamstrung by the weak script. Everyone involved is a top notch (or at least decent) actor, but when you’re just told to go from point A to point B with as little panache as possible, it makes it hard to really engage your audience.

Once again my efforts to find out what cameras used and what resolution the master was are thwarted. I’d pretty much stake my life that this was a digital tape production though, as it has all the earmarks of the commonly used digital cameras of the modern age. The picture is stylized with a thick blue/green look and TONS of dimly lit interior shots. In fact, I actually had to pop in another disc just to make sure that my projector bulb wasn’t dimming too much, as the black levels are so thick and somber that crush pops up quite a bit. The outdoor shots can be bright and sunny, with a syrupy over saturated look that just pops with white levels and the greens and yellows of the countryside. Fine detail is good, but sometimes robbed in all of the darker indoor shots, and the crush kind of loses back drops. However, facial details and up close clothing look more than fine. Artifacting (outside of the crush) is good, with no real major grain spikes and no banding that I could see.

The 5.1 DTS-HD MA track is what one would expect from a thriller like this. It’s a very talky film for about 90% of the run time, and as such the front of the room takes the brunt of all the work. Soft dialog is perfectly intelligible at all times, and the mains get some mild ambient activity in a busy street, or out in the middle of the woods with branches snapping underfoot. The surrounds are mainly used with the score and during the middle of a hospital or busy city, otherwise they’re rather reserved and mild. Bass is very similar. There’s some sold “dun dun duns” in the more tense sections of the film’s score, otherwise it’s reserved for gunshots and the rumbling a car’s engine. It’s not a fancy or flashy track, but there’s nothing technically wrong with the mild mannered mix, and should be more than satisfying.

Strange But True is a reasonably competent thriller, but that’s about the extent of it’s accolades. It’s competent, but doesn’t really stretch itself into something meaningful or engaging. The characters are all very typical, but director Rowan Athale does very little to get the audience to actually invest in the people on screen. At best you’re ambivalent to their actions, and when the “twist” and surprise ending shows up, it’s really not that impactful. The Blu-ray itself is rather solid, with good video, good audio, but next to no extras. While I may not have thoroughly enjoyed the thriller, it does work well enough as a low grade rental.