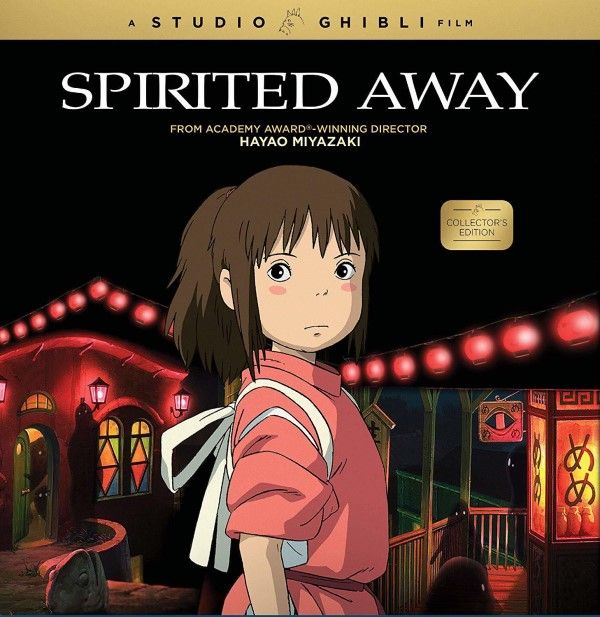 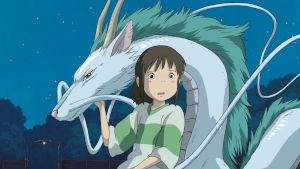 Movie
Shout Factory has done a great job of re-releasing all of the Disney released Studio Ghibli films over the last few years, and this marks the THIRD giant collector's edition of some of their classic films (the first being My Neighbor Totoro, and the second being Princess Monnonoke), Where we get a giant chipboard box to house the film, plus the official soundtrack on CD, and a large artwork flip set to look through as well. These sets are definitely geared towards the collector's market as the film itself and the encodes are no different than the 2017 Shout Factory "barebones" release, but those new extras and fancy new packaging makes for a VERY appealing set that will tug at the "want strings" of those of us who like beefy collector's editions.

Synopsis: Ten-year-old Chihiro is uprooted from her home and her school, presumably due to her dad’s job. On the way to their new home, amid Chihiro’s whining and grumbling, they take a wrong turn and end up at what they assume is a run-down former theme park. However, they find that someone still has a restaurant running, so while the mister and missus pig out on the delectable eats, Chihiro takes a walk and discovers a bathhouse…and a young man who most URGENTLY warns her away. Too late, darkness falls, and Chihiro rushes back to find her parents transformed. Chihiro desperately tries to escape the nightmare, but all her attempts fail until the same young man comes to her rescue and instructs her in how to survive. But can she hold her own against the mercenary proprietress of the bathhouse? Will she find a way to change her parents back and return home? Or is she trapped in a world of scary monsters, adorable soot-balls, Stink gods, and murderous No-Faces?

I like Spirited Away for several reasons, but the one that has stood out most to me over the years, and the one that may be quite relevant considering hot topics swarming around the internet, is that Chihiro is a self-saving protagonist. A FEMALE self-saving protagonist. Not at first, no. Like most characters thrust into an unknown world, Chihiro flounders to understand what she’s seeing, to accept it, to alter her expectations of the norm, and then finally adapt to where she can function in her environment. However, though she does not know the rules governing this world, she is still subject to them. She cannot protect herself unless she has help, and that comes through a variety of supporting characters. Each in turn give her pieces of the puzzle, guide her through the realm of the bathhouse, until she comes face-to-face with her antagonist: Yubaba. Yubaba is ferocious, intimidating, treacherous, and repulsive. She’ll hurt Chihiro if she can, turn her into an animal and possibly eat her, but using the few precious hints already given her, Chihiro steadfastly holds to the first rule – ask for work. Keep asking. Don’t stop. God knows why, but KEEP ASKING.

Thankfully for the audience, explanation of that rule comes in a side comment from Yubaba, one that betrays another rule of this universe – oaths MUST be kept. Even she who holds all the power must abide by that rule. And so Chihiro survives, but only just. In signing the work contract, Yubaba displays another rule of the bathhouse – names can be taken, and new ones given. Chihiro is thus dubbed “Sen,” and sent to work with Lin and her cleaning girls. 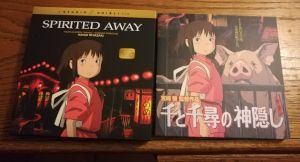 Haku reappears at this point, a stoic and arrogant figure, and shows no recognition of Chihiro/Sen, and even goes so far as to instruct her to call him “Haku-sama,” which in English is roughly “Master Haku.” The honorific “sama,” to those who don’t know, is a term of superiority, an acknowledgement that the person to whom you give it is above you, usually very far above you, and such a person is allowed to treat you as subjugate to them. This is a rather humbling position for Chihiro, especially since he had been so instrumental in getting her the “job” in the first place. However, “Sen” accepts this as part of her new identity. And it’s an identity too easily assumed, one that subjects her to harassment and insults. Later, when this same Haku comes to fetch her to see her parents, once again all compassion and patience, he saves her a second time by giving back her true name. In this short scene, we discover Haku is also under Yubaba’s control, having forgotten his real name, and so became her puppet.

Now, there’s another character whose existence in the film is both vital and somewhat enigmatic – the No-Face. There have been many interpretations as to what the No-Face symbolizes, among which is how some people cannot function without trying to please others, and in so doing, destroy the very thing they want to keep. Another interpretation is that he is the embodiment of what happens when greed is allowed to run amok, and can only be conquered once removed from the source(s) of temptation. Another yet is the identity question: is he his own creature, or does he represent the assimilation of external forces that cause a person to assume a new identity? Is this identity then something the person wants to keep, or something to be purged so as to return to their true self? You be the judge. Personally, I find No-Face a pathetic yet compassion-inspiring figure, and I believe his role in Chihiro’s development is possibly the most critical. He is both a monster to be defeated and a victim to be rescued. Chihiro does both. This entire situation evidences yet another rule – no one is who they first appear to be. Except maybe the soot sprites. They’re just adorable.

One of my most favorite characters in this movie is actually the most surprising. She makes her entrance as a paper doll, one of thousands that actually attack and nearly kill Haku; she turns Yubaba’s baby into a rat and her harpie into a bird; and to top it off, she demands Haku’s life in exchange for something he stole. When I first met her, I thought her on par with Yubaba! Conniving and homicidal, one at first thinks that Zeniba the Swamp Witch will be Chihiro’s final test, the boss at the end of the quest, as it were. Leaving Haku in the care of those she trusts, she chooses to leave the familiarity of the bathhouse and journeys with three companions to Swampy Bottom to return what was stolen and ask Zeniba to lift the deadly curse ravaging Haku. But upon arriving, she discovers Zeniba is quite the opposite of her twin. She demonstrates hospitality, compassion, and a great sense of humor. While all the other supporting characters aid Chihiro in a hostile environment, Zeniba provides a safe harbor for rest, which is exactly what poor Chihiro needs. All crises end at Zeniba’s; Chihiro returns to Yubaba a different girl than the one who first begged her for work, ready to confront her ultimate trial, the one that will grant her freedom. Zeniba indirectly demonstrates the fourth rule governing this fantastical world – the bathhouse can be left.

Rated PG for some scary moments 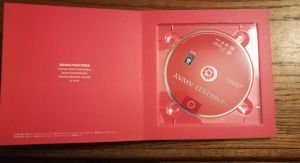 The Ghibli releases are known for their exceptional video quality, but Spirited Away is the culmination of their work, with incredible detail, amazing colors and deep inky blacks. It is the epitome of hand drawn Japanese animation at its finest, rivaling even the greatest and most impeccable of digitally animated films today. The colors are nothing short of amazing, with vibrant primary colors, soft pastels and a huge incorporation of octopus inky black levels. Shadow detail is nothing short of amazing, and fine detail in the animation is just ….well…. perfect. Every line, every curve, every bit of animated clothing looks picture perfect. There’s a very fine layer of film grain over the image, giving it a very natural and warm look to the picture. The disc itself is free from any sort of digital imperfections as I couldn’t see any macroblocking, aliasing or DNR. Basically, one of the most perfect animated films I’ve seen in quite some time. Compared to the Disney release they're virtually identical, and ACTUALLY Identical to Shout Factory's 2017 regular release, although the Shout release was given a much higher bitrate than Disney did. 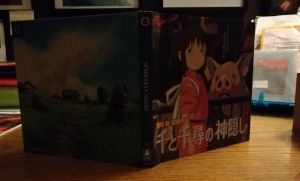 Shout Factory has given us two lossless encodes today, as normal. The first is the English matrixed DTS-HD MA track, and the second is an identical Japanese track. Fidelity and clarity are almost identical on both tracks, with the only real difference being the choice between English voice actors and Japanese. If you’ve read my other reviews, you know I have a strong inclination to choose the original Japanese due to the vocal inflections and voice acting feeling more natural, but with them being this close to each other, the choice is all yours. Dialog is crystal clear, with strong vocals and a good balance with the rest of the track. The LFE is strong and powerful across the board, really adding some authority to some of the more boisterous scenes (especially No-Face’s rampage), and the surround support is equally impressive, giving a completely immersive feeling to the track. For those of you who listen to the original Japanese track, be at ease that Shout has provided literal Japanese subs as well as SDH for the hard of hearing as well, so no worries of the infamous Disney "butchering" tactic of putting dubtitles only in the release and not literal translations.

Spirited Away is one of the few movies, I think, that have a female protagonist truly transform from a victim into her own hero. No, she’s not competent at first. She complains and whines and resents her situation. However, being thrust into a supernatural and frightening realm, she must first learn the rules of her new world, to function within them, and then begin to exercise her own will against those rules. This is when she finds she can save the people she cares about, and ultimately, save herself. One would be remiss, however, to neglect those that gave of themselves to help her become stronger and more confident. We all have these people, the ones whose kindness and courage live with us and become part of who we are. “Spirited Away” is not just about a girl surviving a world of monsters; it’s about character and acceptance and love. Combine that with an almost perfect audio/video presentation and this is the version of "Spirited Away" that fans have been waiting for all these years. The decision to upgrade from the regular Shout Factory Blu-ray (or the Disney Blu-ray being that they were virtually identical) will SOLELY depend upon how much you love the special features, and love the new collector's edition packaging. This set is geared for the collector first and foremost, but will appeal to those who haven't upgraded to a Blu-ray version of the movie yet either, as it is the most feature packed edition out there (although it forgoes the DVD from the regular edition for the Soundtrack CD in this one). HIGHLY Recommended.

Thanks for the review. This is an awesome movie and glad the collectors edition is worth getting.

This movie is a fever dream. Love it.