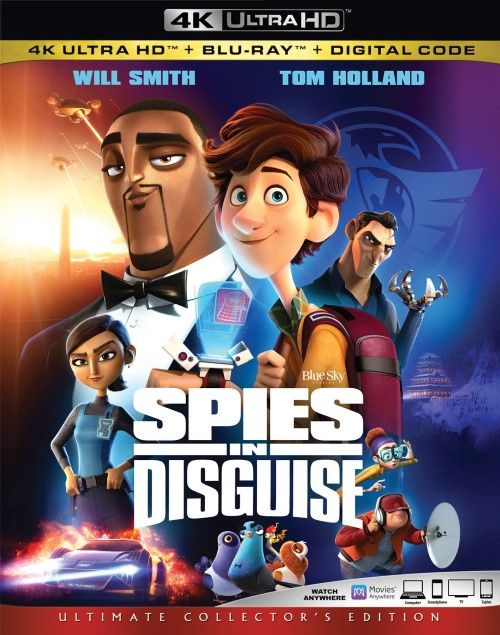 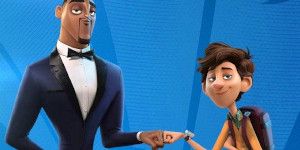 Movie
The family film market is pretty much saturated at this point, especially in the animated department. A long time ago in a galaxy far far away we used to only have Disney to provide QUALITY animated entertainment. Then there came Pixar. Sure we had Dreamworks animation, but they were considered second tier at the time. Now Dreamworks is riding just BARELY under Disney/Pixar levels and the second tier animation titles are relegated to 20th Century Fox (now 20th Century Studios after the Disney buyout) and Universal. These second tier animated films are range from good to “ow, that hurt”, but in recent years they have at least stayed right in the middle of the “good” range. Spies in Disguise is no different, crafting a typical animated story line with cute animals, high priced voice actors, and a generally all around pleasing experience for people of all ages.

For a “second string” studio release, Spies in Disguise was aiming for the stars. It sported a $100 million budget (fairly large for an animated film, even with CGI animation getting cheaper and cheaper), AND starred Will Smith and Tom Holland in the title roles (I’m guessing Smith took up a huge chunk of the budget), but sadly only made $160 million world wide (not a whole lot, and may have actually lost some money when counting in marketing and other things). Still, money doesn’t equate quality, and I actually liked the look of the trailer so I went in with an open mind.

Spies in Disguise plays close to the whole James Bond market, revolving around international super spy Lance Sterling (Will Smith), the darling of the U.S. Government. He’s smooth, suave, and gets his man no matter what. After an attempt at recovering a secret weapon from Yakuza hands, Lance is set up by a mysterious robot handed nemesis (Ben Mendelsohn) who makes it look like Lance stole the device, triggering an IA audit of the man. With no one believing him, Lance goes on the run, hiding out where he thinks no one will find him. At the house of the quirky inventor Walter (Tom Holland) whom he JUST fired that day.

Well, Walter is actually working on an invention to transmutate humans into something else for espionage purposes (he ends up using the feather of his pet pigeon to do so), only to have Lance barge into his place and drink his experiment. Suddenly Lance transmutes into a pigeon, and he’s STILL being hunted by the U.S. Government. On the run, and out of luck, Walter and Lance have to figure out a way to get the secret agent back to human form, AND track down the mysterious man with the robotic hand who has single handedly (pun intended) taken his life away from him.

I was actually surprised by this one. I was fully expecting a kiddy kiddy movie and not a movie that hits both at teens AND adults. The level of humor is spot on, and I actually started really enjoying the film, despite the fact that the plot line is fairly generic. You know, good guy needs to overcome his own fears, and the evil villain has some sort of redeemable aspect to him. I was really surprised how they went with the whole pacifistic response to a spy movie. Walter is REALLY big about finding the good in everyone, and it’s a reason why his gadgets all have non-lethal means to them. Lance, on the other hand, is an embittered spy who realizes that sometimes you just can’t look evil in the face and take the “nice” way out. I tend to lean more towards Lance’s point of view over Walter’s as it’s a more realistic point of view, but the softer side of Walter aims specifically at the kids. You can also see this played out as it’s revealed that the villain, Killian, is a direct product of American Military violence over seas, kind of not making him a TOTAL bad guy. A bit of an agenda there, but it’s fairly low key if you just focus on the antics and Walter’s crazy inventions.

Tom Holland Will Smith are both excellent in their roles. Holland is soft spoken and shy (much like his Peter Parker), but it’s Will Smith who really shines here. The veteran actor has been known his entire career for his “in your face” charisma, and he doesn’t leave anything on the table. Will is smooth, sauve and pretty much Lance Sterling with some extra rap lyrics and some jokes, so he was a shoe in for the character. Supporting actors Reba McEntire, Karen Gillan, Rashida Jones, and DJ Khaled do their part, making it a generally fun and silly movie.

Spies in Disguise is a nice looking 4K UHD upgrade over the Blu-ray, but not a massive one. It adds some nuance and fine tuning to the already great looking digital image, especially in backgrounds and with the use of HDR. colors are warmer and deeper, but the image is ever so slightly dimmer if you look at them side by side. The fine detailing is still excellent, but the source animation doesn't show a massive improvement over the Blu-ray in that particular department as the source kind of limits that. The softness and banding that I noticed in the Blu-ray seems to have been completely eradicated though, and little things like underwater shots look cleaner and better defined to the naked eye.

The 4K UHD get the upgrade to Dolby Atmos, and it’s a doozy too. Luckily the 7.1 DTS-HD MA track was no slouch either, and this new object oriented mix just improves upon the already great mix on the Blu-ray. Surrounds are great, and the bass is just devastating. The scene with Killian unleashing the drones is AWE inspiring. Surrounds are a little lighter, a little airier, and the mix makes use of the overheads in a few places (especially with the drones). it’s a great mix and just enhances an already great 7.1 experience with those few tweaks.

Spies in Disguise is a simple and cute film based off of a 2009 short. It’s goofy, silly, and full to the brim with solid humor and silly hijinks (mostly as Lance has to deal with other pigeons and his own “pigeonhood”). The movie may not have made a ton in the box office, but it’s a very solid middle of the road animated film. Plenty of bright lights and colors, and fun humor that works for kids and adults alike. The audio and video are NOTHING to sneeze at and the extras reasonably done as well. Worth checking out.