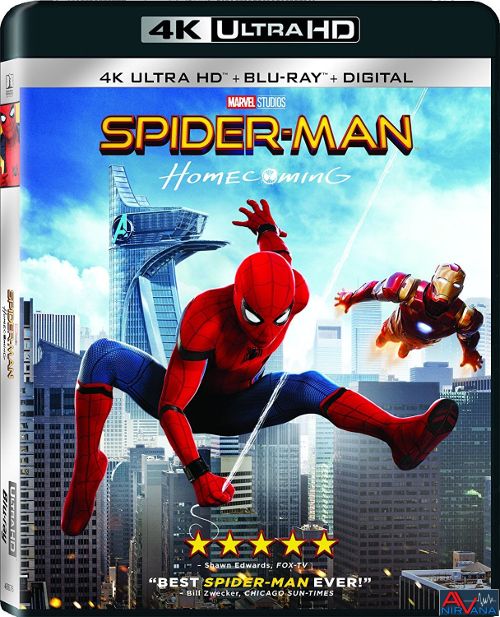 Movie
I honestly can’t remember a time that I have been this conflicted about a Spider-Man movie. Full disclosure here. I’m a HUUUUUUUUUUUUUUUGE Spider-Man fan, and have been ever since I was a little boy. I grew up collecting 80s Spidey comics from my local bookstore ever since I was an 8 year old boy, and continued collecting long into my adult years. Much to my wife’s chagrin, I still maintain a very large collection of bankers boxes FULL of comics ranging from the 60s all to the way till about 2005. I’ve read, re-read, and lovingly taken care of my collection for many a year, and have indulged myself in every Spider-Man iteration to come to the big screen. I grew up watching Disney’s famous animated series (I’m still super sore that they haven’t released that on home video in the United States), and eagerly ate up Sam Raimi’s trilogy of films as well as Andrew Garfield’s duo of films a couple of years ago. While Raimi’s trilogy has worn badly (sorry, even Spider-Man II, I know that’s heresy), I really enjoyed the Andrew Garfield films (despite Jamie Foxx’s horrendous dialog in The Amazing Spider-Man 2), and I was super excited to find out a few years back that Sony had decided to hand the reins over to Marvel and co-produce a new reboot. Tom Holland’s introduction in Captain America: Civil War was a cute cameo, but only served to intrigue me further. Especially since it looked that Marvel and Sony has decided to go back to the roots of the character and bring good old Peter Parker (Tom Holland) back to the good old high school days instead of starting him as some 30 year old wannabe. With all this hype I was incredibly stoked to see Spider-Man: Homecoming, and while I enjoyed many aspects of the film, for every good point that the movie brought, it counterbalanced itself with a negative point. This creating a situation where I honestly don’t know whether to love or hate the film.

The film picks up immediately after the events of Captain America: Civil War with Peter Parker (Tom Holland) getting back into the swing of things (har har) as your average high school student with super powers. Parker is trying to get back into school, but his desires to be a superhero are outweighing the costs, and the young man flits around the city of New York catching low lives and doing his best to just blend in with society. The problem is, he’s not that good at laying low. Before long he’s investigating into a series of illegal arms dealings that reveals that there are bigger things afoot than your average guy lifting a purse. One Adrian Toomes (Michael Keaton) is running an illegal weapons operation after stealing technology from the alien invasion during the first Avengers film. Toomes has created the perfect ring of criminals, but has somehow managed to stay under the radar of all the big guys. That is until Peter catches wind of his little operation and tries to take him out.

The only thing is, Peter is still a kid, and Tony doesn’t seem to have any faith in him. Warning him off, Mr. Stark gives the young boy a chance to be what he really is, a young kid. However, Peter is not about to be dissuaded by his mention, and uses the super spider suit that he was given in Captain America: Civil War to wage a one man way against Adrian Toomes and his flying “vulture” suit (*snicker) in order to rid his neighborhood of the weapons dealer and his ilk. Naturally things go awry, Peter ropes in his friend Ned Leeds (Jacob Batalon, who most likely will NOT become The Hobgoblin) to help him out, and he has to prove himself worth of the technology that has been given to him by Mr. Stark.

Oh boy. This is really a tough one. I’ve been agonizing over this ever since I saw Spider-Man: Homecoming in theaters. How do I rate this one? While there is a lot of things going for the new iteration of Spidey, there is also a LOT of things that Marvel messed up on. It’s one of those situations where I sitting here with a list of pros in one hand, and a list of cons in the other. Sure, the Raimi films weren’t perfect, and Andrew Garfield’s films made some mistakes, but I have never been this conflicted about a Spider-Man film before. Lets start from the top.

Right off the bat we can tell that this is going to be a film that ties DIRECTLY into the Avengers films. That’s not even a question at this point. Robert Downey Jr. infects himself into the movie as if it was your average Marvel film, and he proves to me that Tony Stark/Robert Downey Jr. has become the uncool version of Wolverine in the X-men films (The X-Men films were always a team effort, but they became “Wolverine and his buddies in a movie together” more often than not. The same thing applies here, with Tony Stark injecting himself into every Marvel film that he can, but the problem is that Tony Stark has become so much of a jerk that you hate seeing him anymore, unlike Wolverine). Even the suit that Spidey wears is nothing but an Iron Man suit in spandex, leaving only the web slingers and some fancy juking to make the webbed superhero his own character. The same thing can be said for the marvel humor. Too many times you feel like the humor is forced and inorganic, trying TOO hard to be another Avengners film, just without the title. Then there’s the annoying twist of having Michelle (Zendaya) being the PG version of the college age, edgy social justice convert with comments about the Washington monument, and trying to be the “bad girl”. Kevin Feige has made mention that she is going to play an important role in Peter’s life, but it won’t be the traditional role that we know of, especially with the giant bombshell that she drops in the last scene of the movie (I won’t spoil it).

Now on to the good points. Adrian Toomes. Holy Cow. Michael Keaton made the Vulture into a fnatstic character, and I was HUGELY critical of him being another giant mecha suited character from the trailer (we all saw how badly The Rhino turned out in The Amazing Spider-Man 2). I grew up with the 80s and 90s version of Toomes being an old man who could fly and drain life from characters, but Michael Keaton really shone here and created one of the best Marvel subvillains that I have seen. One of Marvel studios biggest problems is creating a villain that is fleshed out and gives you enough to care about, but the Vulture is done so well that you feel like he’s almost a main hero at times. Keaton makes him both sympathetic and loathsome at the same time. There’s also a huge hour and twenty minute twist in the film that really was well done. I won’t spoil it for you, but lets just say that I really felt it was the high light of the movie, even above the awesome final fight scene between Spidey and Vulture.

While I’m very divided about the film itself, the casting was superb. Marissa Tomei is stunning as aunt May (probably the hottest Aunt May we’ve ever seen, as Marissa Tomei could make a 90 year old gorgeous), and Tom Holland really makes himself accessible as a youthful Peter Parker. I’m still not sold about Zendaya as Michelle (hint hint at that first letter in her name) but Michael Keaton and Bokeem Woodbine s the twin villains made for an incredibly thrilling ride (I loved them sneaking in The Shocker).

Sony’s 4K UHD was shot using 2.8K Arri Alexa cameras and finished with a 2K digital intermediary for home video. The 2.39:1 HEVC encoded UHD disc looks good, and like most 2K mastered modern films, shows a moderately pleasant upgrade over the 1080p Blu-ray. This is another one of those discs that sports Dolby Vision as well as HDR, but at the moment this review will have to focus on the HDR usage as we are looking at new players that support the brand new Dolby Vision. Details levels show a modest boost over the Blu-ray, with more intricate details on the Spidey suit visible to the naked eye, and little things like the armor of The Vulture showing up better. Blacks are deep and inky with VERY little banding in the background, and the use of HDR is quite nice. The strong blues and reds of the suit show up AMAZINGLY well, and the neon green of the Vulture’s eyes almost pierce right through you like green ingots. It’s an incredibly well done 4K disc, and while it isn’t as sharp as some of the 4K mastered UHD films, it is more than a slight improvement over the Blu-ray

All right, here’s the goodies. Gone is the 5.1 DTS-HD MA track from the Blu-ray, and in its place is a fully Dolby Atmos track with all of the upgrades that you were hoping for. The track feels fuller and richer (and yes, I level matched to make sure it wasn’t a placebo effect from DTS-HD MA to Dolby) with a more seamless integration of surround usage and a fluid sense of directionality. Spider-Man whipping through the air shifts from speaker to speaker as he bounces around, and action sequences are incredibly immersive and effective. Gun shots and crackling of other worldly energy snap and pop, while the roar of guttural LFE pummel the viewer when Vulture launches off with his jet pack. The scene with the ferry is probably one of the most visceral and deep moments of the movie, ripping up the sound stage with screaming passengers, soft sounds of cars falling into the water on the side surrounds, intermingled with the rumble and roar of a giant boat splitting in half. It’s an amazing track and DISTINCTLY better than the 5.1 mix.

This is the first time that I truly feel like the father in Fiddler on the Roof… “on one hand...on the other hand” runs through my mind as I digest the film. There’s so many fun aspects about the movie to enjoy, with a fresh take on Spider-Man’s introduction, but there is also a lot of flops and Marvel faux pas along the way that make me hesitant to recommend or dissuade the viewer from watching the movie. Was it fun? Oh yeah, I had a good time. But was it good? Ehhhhhhhhhh, I’m still torn about that. The audio and video are what you would expect from a modern day action film, and the extras are rather good. If you're looking between this and the Blu-ray, I'd definitely go with the 4K set. The Atmos track is a great upgrade over the 5.1 DTS-HD MA mix, and the 4K image is a solid upgrade as well. Still, as for the movie itself, I'd check it out yourself as this was the first Spider-Man movie that I was honestly this torn up about since Raimi's Spider-Man III. Check it out is my recommendation.