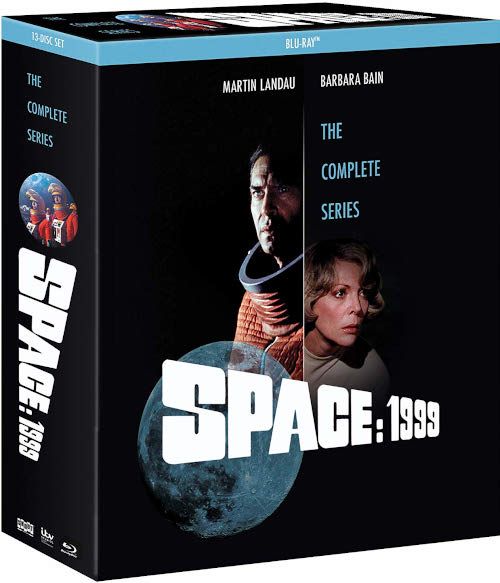 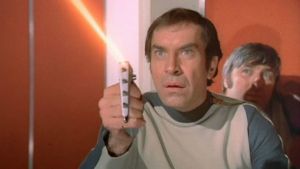 Movie
TV shows on home video formats (especially Blu-ray) are not as prevalent as they were back in the heyday of DVD, and old classics from before the 90s are even MORE rare than the proverbial hen’s teeth. Unless you’re Paramount and have the word “Star Trek” in your name then there’s a good chance you won’t see a Blu-ray release if you’re a catalog TV show these days. Luckily Shout Factory (I would have though Scream Factory due to being Sci-fi) has been rescuing a lot of these old goodies and putting them out on Blu-ray with usually great results. This time it’s a 1975 classic in the form of Space: 1999, a show that was designed to pick up where the original Star Trek: The Original Series left off after being so abruptly canceled. In that aspect it certainly grabs the baton and runs with it (at least in the first season) and works as a kind of a bridge type series to jump the gap between the campy Star Trek and the space fantasy that would become Star Wars: A New Hope only a few short years later.

Those who love science fiction, or shows like Red Dwarf, Battlestar Galactica (the original, not the SyFy reboot) and the like will get a kick out of Space 1999. The show is pure 1970s cheese on the surface, but under that surface is a fairly deep and complex sci-fi show that deals with a lot of interpersonal and social conflicts of the time. It didn’t hurt the show at all that it starred Martin Landou, who was hot off from leaving Mission Impossible: The Series (where he was replaced by Leonard Nimoy, who ironically had become Spock on Star Trek only due to the fact that Martin Landou had turned down Gene Roddenberry’s offer to play the character). It has romance (ironically Dr. Russell’s Barbara Bain was actually Martin Landou’s real wife at the time), action, drama, and all the fantastical exploratory epics that made shows like Star Trek so much fun to watch.

The year is 1999 and Commander John Koenig is sent up to the lunar moon surface to inspect a nuclear waste dump that has been effecting workers strangely. An unforeseen explosion detonates, basting the moon out of Earth’s orbit and into space hitherto unknown. Taking command of the moon station, Commander Koenig navigates the Alpha Centauri survivors through the unknown worlds of space, meeting new life, new civilizations and boldly going where no man has gone before…….errr, you get the drift. 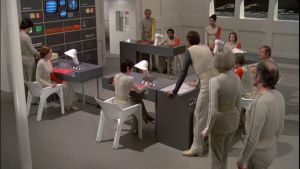 I hadn’t seen much of Space 1999 before my college years, but then I was introduced to the age old DVD set that was out at the time and became hooked. It almost feels like a strange hybrid between Star Trek Voyager (mainly due to the plot device of being blasted into an unknown quadrant of space) and the original Star Trek series from the 60s with Kirk. Surprisingly the show doesn’t feel nearly as campy as Star Trek, and instead deals with some pretty heady material. We have morality issues, law breaking issues, issues about sex and loyalty. Sure there’s some 1970s kitsch, but really the show feels like it was geared directly at the kids who watched Star Trek and had sort of matured to where they were wanting more meat on the bones of their Sci-fi shows (or the adults who always thought Star Trek was too campy for their tastes).

The first season is really the best of the show, as it takes itself seriously, trying to craft a really dense, but action/adventure oriented, series. The second season is where things get a bit wonky. The set design has been revamped, and the outfits and set pieces are obviously more “trekish” in nature. The same goes for the plot lines. The heady nature of the first season is replaced with a more adventure like tone that fits more in the line of Star Trek knockoff than it’s first season had wanted to be. We even have shape shifting aliens as guest characters, and Commander Kroenig is more brash and stereotypical “Kirk” this season. Sadly the show got canceled that season, as the campy nature of Star Trek infected Space: 1999 and the series never got a chance to get a REAL conclusion (although the end of season 2 is pretty good for what it is).

On a side note, Space 1999 was always a bit fast and loose with the episode ordering depending on who was broadcasting over the year, and Shout Factory has made a specific note about their ordering of the episodes

Viewing Space: 1999 can sometimes be tricky for those looking to establish a clear, definitive timeline from episode to episode. This is due to a number of factors, including the nature of episodic television and its production at that time as compared to now, and the variance in airing dates from station to station and nation to nation. Ultimately, there are moments of character or storyline continuity that might seem out of place. While some fans have made excellent suggestions regarding a viewing order that makes the most sense, it is generally accepted that there is no single “correct” viewing order — only possibilities. With this in mind, we have presented Space: 1999 here in production order, as it is the most commonly accepted viewing order. 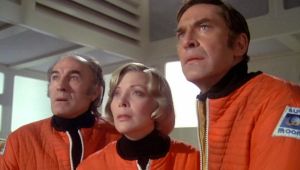 Shout Factory has not made any statements about restoring the discs, or where the restoration came from, but from what I can gather snooping around these seem to be sourced from the same master that the Network Blu-rays in the U.K. were sourced from a few years back. That is already a good sign as supposedly those Blu-rays looked great and needed almost no tweaking to get to optimal settings. I don’t have access to the Network Blu-rays, but this set from Shout looks absolutely fantastic! The images are sharp and clean, with great burnished 70s colors coming through, as well some excellent detail levels. There’s some mild softness to some of the optical effects, but that’s mostly due to how things were shot back then to blend the practical effects, models and live action shots together. You can actually see the zippers and stray fibers on the Terran uniforms, as well as all the goofy little models that were used for the show back then. Black levels remain strong and I can’t see any major issues with artifacting at all. 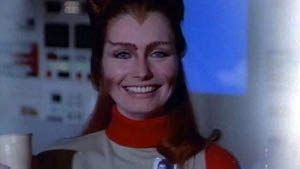 Shout Factory has given us the original 2.0 Mono track in DTS-HD MA as the main track, but has also incorporated the 5.1 remix in DTS-HD MA as well. Naturally I swing towards the original mono track due to authenticity, but the 5.1 remix is not bad, despite being blatant revisionism. The 5.1 mix is more of a 2.1 track, with very mild bass response and a hefty weight up in the front of the room. There’s a few space ship crashes and laser blasts that fill out the back of the room, but it’s a mild surround mix at best and shares more in common with it’s 2.0 Mono brethren than one would expect. Still, the Mono track is quite pleasing as well, with good vocals, a clean sounding score, and almost no analog hiss. I can’t tell whether the audio was remastered or not, but at the very least, the elements were in great shape to put out a track this good from a low budget 70s show. 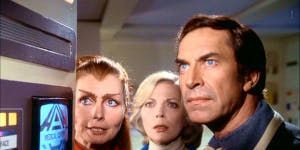 Space 1999 is a good show to revisit and Shout Factory has outdone themselves with this boxset. It’s not cheaply packaged, as we have a full on chipboard box containing 3 Blu-ray amaray style cases. There’s a case for each season, as well as a third case that houses a disc full of special features. As for features, this thing is crammed to the gills with old legacy features from the DVD days, as well as 30-40 percent brand new extras assembled for this release! The video and audio look/sound fantastic for a 1970s TV show that didn’t get much love and overall this is a show that’s well worth picking up if you’re a fan of classic sci-fi from the 60s and 70s.

Thanks for the review. Since I am a fan of the original Star Trek series as well as Red Dwarf and the original Battlestar Galactica, I will have to check this one out.

Oh my gosh... what mind trip. I haven't thought about this series in years. Maybe decades!!

We had this growing up in the early 70s: 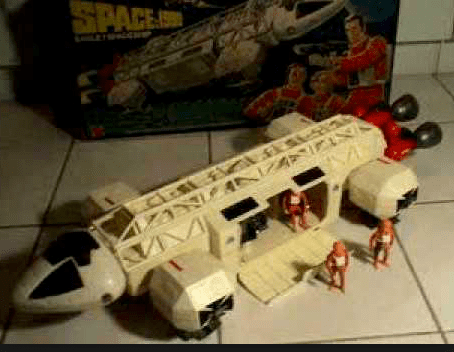 Played with that ship for hours upon hours.