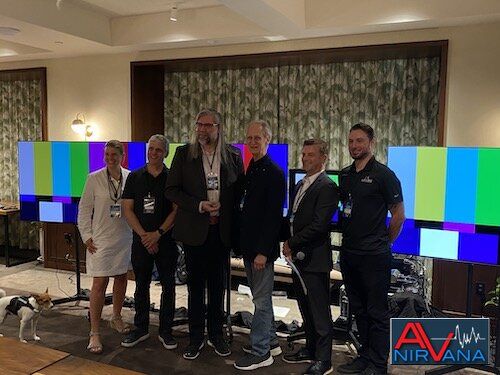 (July 30, 2022) This year’s TV Shootout emcee (Caleb Denison, Digital Trends) closed his opening remarks by stating, “the world is watching.” And, for the most part, that’s true. This year’s crop of 4K flat panels in Value Electronic’s 18th annual TV Shootout represents the very best TVs available in the North American market, which is largely representative of the best consumer TVs on the planet. Of course, it doesn’t account for manufacturers like Panasonic (which has deliberately removed itself from US distribution), and several Asian brands. Nevertheless, Sony, Samsung, and LG, the three names tasked with holding court at The Company Building in New York City, all have a global presence and are the heaviest of heavy hitters in the United States.

This marks the fifth or sixth time I’ve attended the TV Shootout, and much has changed over the years. Once again COVID’s impact loomed large, leaving attendance to select members of the press and industry experts – the general public was asked to stay home and watch a live stream compliments of YouTuber SpareChange. And voting was reserved for judges only, which, in the name of simplicity, is a wise choice.

Event originator and organizer, Robert Zohn (Value Electronics), continues to up his game in regards to the shootout’s execution and integrity, having corralled an impressive cross-section of Hollywood colorists, calibrators, and video experts for event setup and judging. Names from HBO, Viacom, Muridio, Criterion, and a host of other entities were rattled off during Denison’s opening remarks, and that doesn’t include forum favorites like DeWayne Davis. In many regards, I sensed this year’s gathering of professionals was more humble and technically focused than in the past. That’s not to say that previous events were less meaningful, but I certainly appreciated the vibe and professionalism of Zohn’s 2022 crew.

Of course, the real stars of the event were the televisions, which calibration expert DeWayne Davis said are the most accurate displays he’s ever seen. They’re so good, Davis said, that he had “no clue” which one was going to win. And that sentiment comes on the heels of having spent significant time working with other experts to prep the TVs for the event. Davis also said that this year’s contestants had better internal controls, finer controls, and “controls that actually do what they’re intended to do.” In other words, engineers at Sony, LG, and Samsung haven’t been resting on their laurels.

Shootout judge Kenneth Almestica, a video industry veteran, reinforced Davis’s sentiments, recalling his first experience entering a professional production trailer and seeing reference monitors in action. “It was like looking through a window into the real world,” adding that actual TVs in the real world didn’t come close to that kind of performance. That has changed, Almestica concluded, saying the TVs in this year’s event are amazingly close to reference monitor performance.

To judge the performance of this high-test crop of TVs, Zohn’s crew calibrated them on-site and arranged them side-by-side for easy comparison to a Sony BVM 310 Reference Mastering Monitor. Costing nearly $35,000, the BVM is a dual-layer LCD display that Hollywood studios use when they create content. Because it represents the best of what creators see during the creation process, the goal of any consumer-grade TV is to produce an image that matches the BVM.

To make any sort of real-time judgments possible, all five shootout contestants and the BVM needed to show test patterns and film content simultaneously with perceptively consistent uniformity and quality. This was made possible by top-flight switching gear and cabling that looked exhaustingly complicated.

Content-wise, shootout TVs were fed demo material and test patterns from a new (forthcoming) Spears & Munsil test disc, along with a range of disc-based and real-world video material. Video game content was not included, however it’s something we might see enter the fold next year.

According to my eyes, all of the TVs looked gorgeous throughout the shootout. Color and flesh tones looked natural across the board, but the OLED models outperformed their LCD mates in motion resolution, black level detail, off-axis performance, and their ability to reproduce coloring as compared to the Sony reference monitor. Not surprisingly, the LCD TVs were much better at peak brightness and high APL image reproduction (tho the OLEDs outpaced LCDs in high APL when considering color volume).

I was particularly struck by the OLED TVs' ability to eliminate bloom around bright objects on a black background, something the miniLED backlit LCD models couldn’t do. It’s all due to a simple matter of emissive versus transmissive technologies. As Zohn correctly pointed out, transmissive displays will always suffer from some sort of bloom or light bleed.

Following hours of meticulous evaluation and deliberations, the experts crowed Sony the 2022 King of 4K TVs, granting its 65” XR65A95K QD-OLED an average score of 8.9/10. Second place was awarded to Samsung and its QN65S95B QD-OLED with an 8.3, and LG’s OLED65G2PUA OLED came in third with an average score of 7.9.

LG’s 65” OLED65G2PUA struggled with SDR Day Mode testing, which is a direct result of poor uniformity caused by red pixels burning brighter than green and blue pixels along one edge of the panel. And, yes, this is a problem you can detect with real-world content. The reason is up for speculation, but I’m told this isn’t an issue with other display sizes in the G2 family. That points directly to an LG Display manufacturing problem, tho LG isn’t likely to confirm any issues.

Tomorrow, media and judges will reconvene to conduct an 8K shootout. Stay tuned for results from that event.
Last edited: Jul 31, 2022
Click to expand... 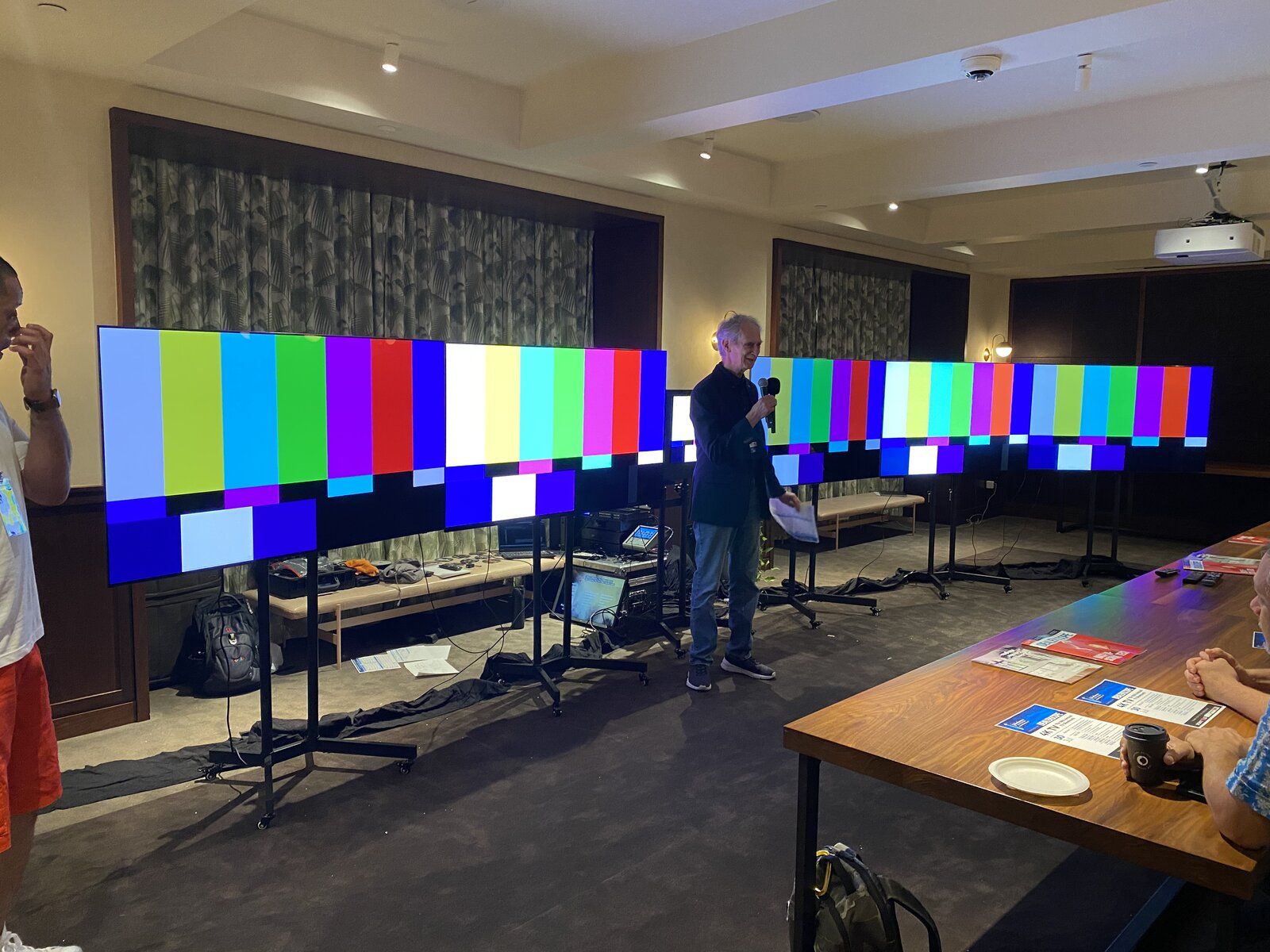 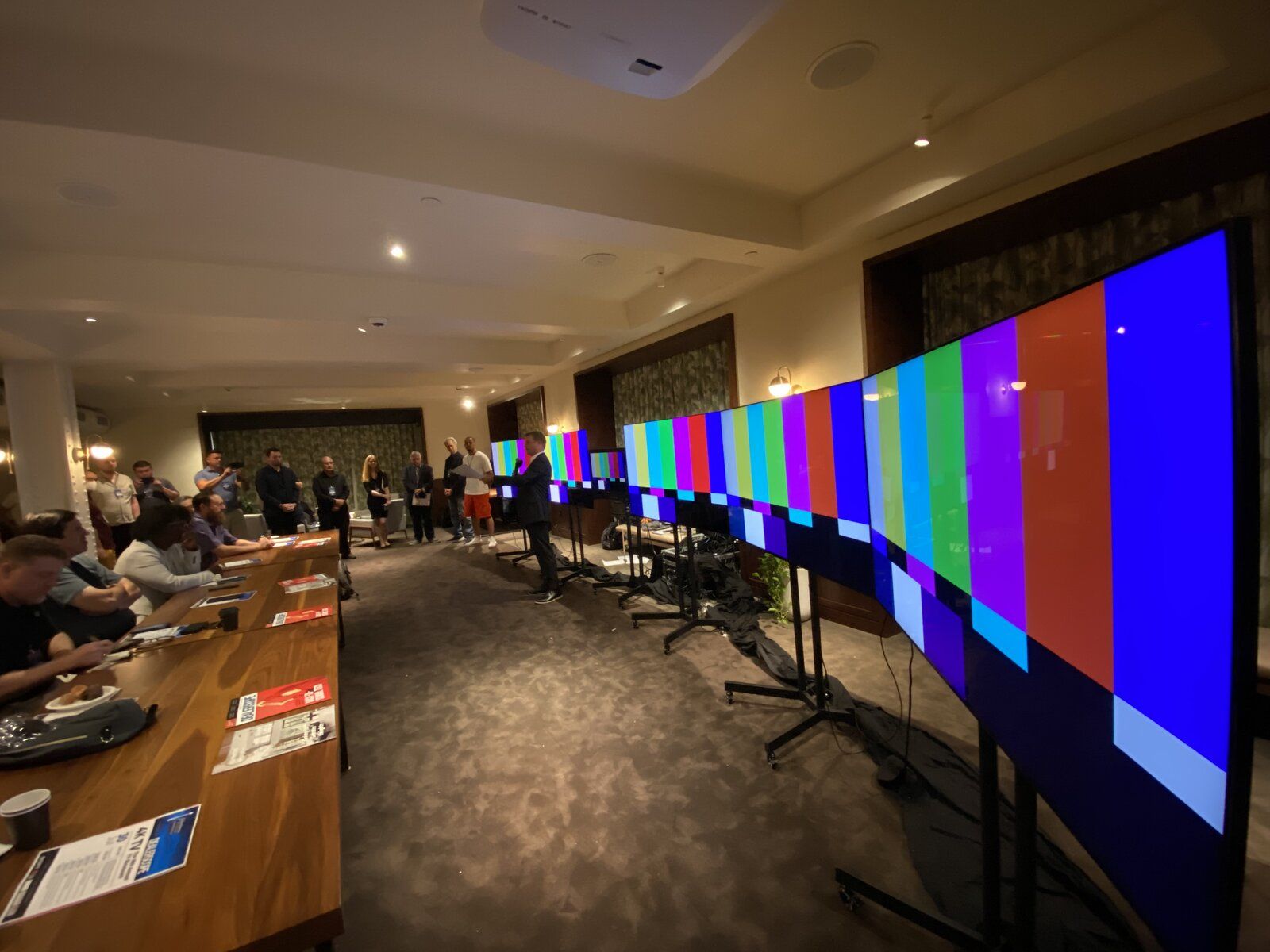 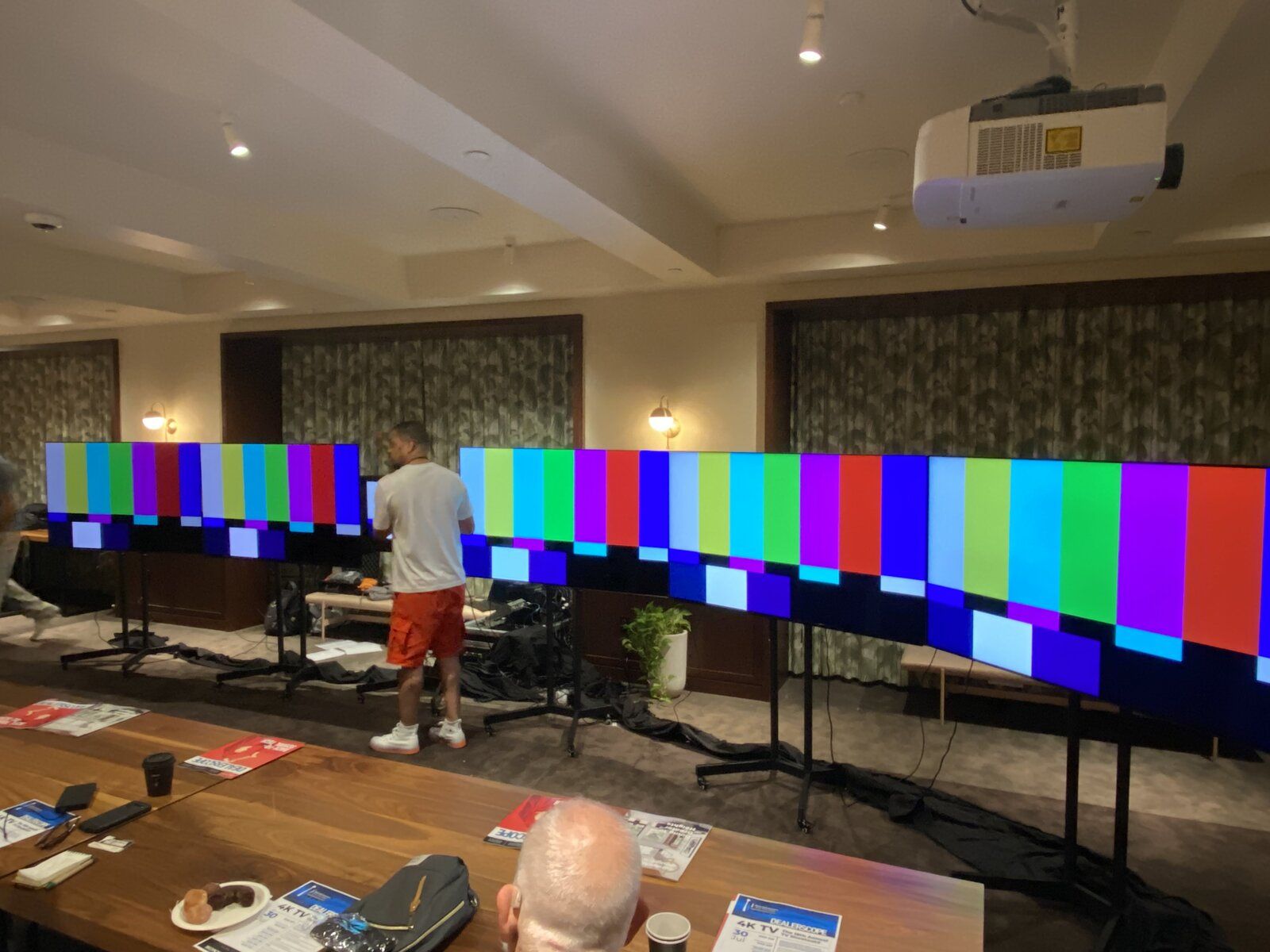 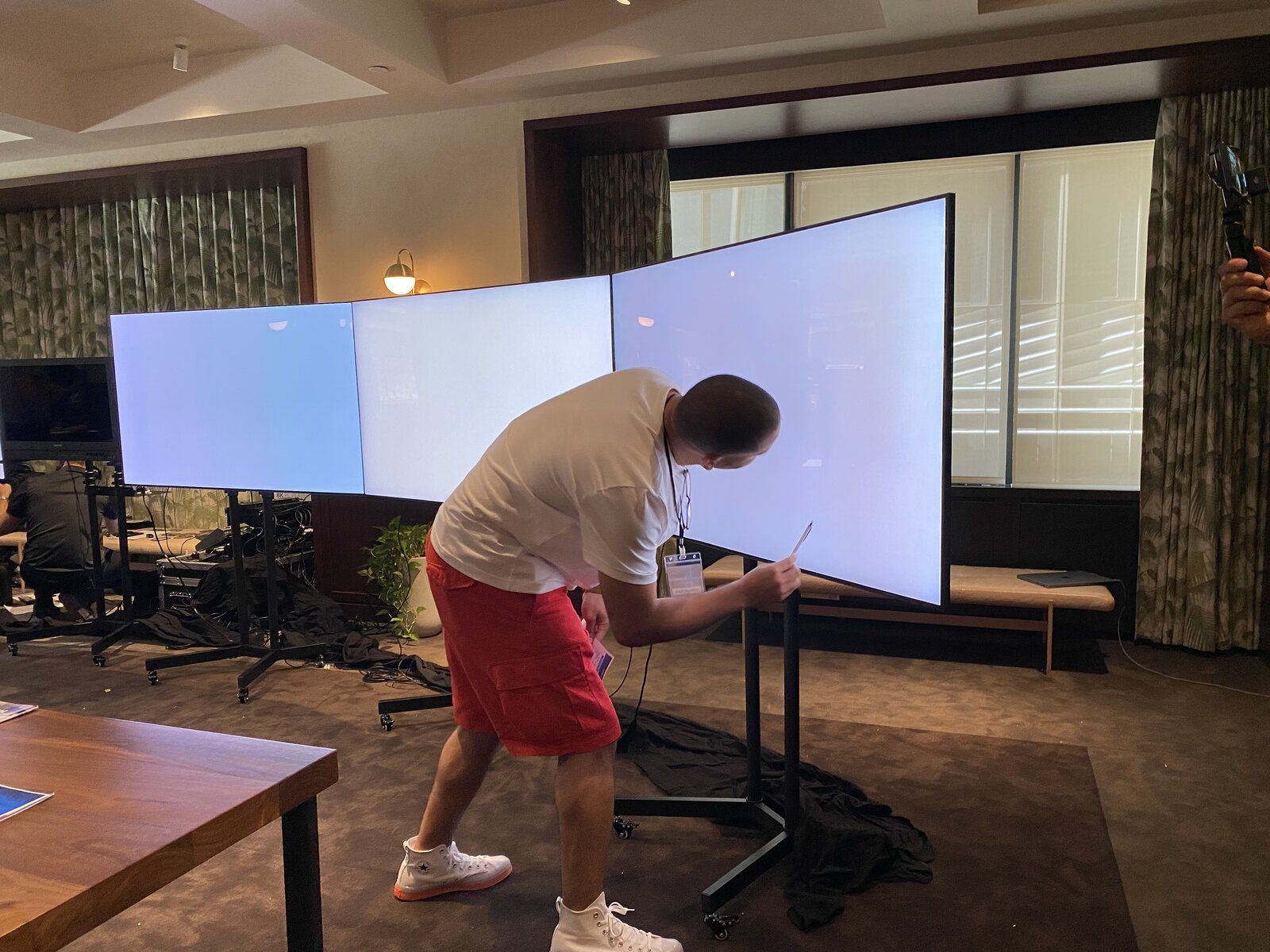 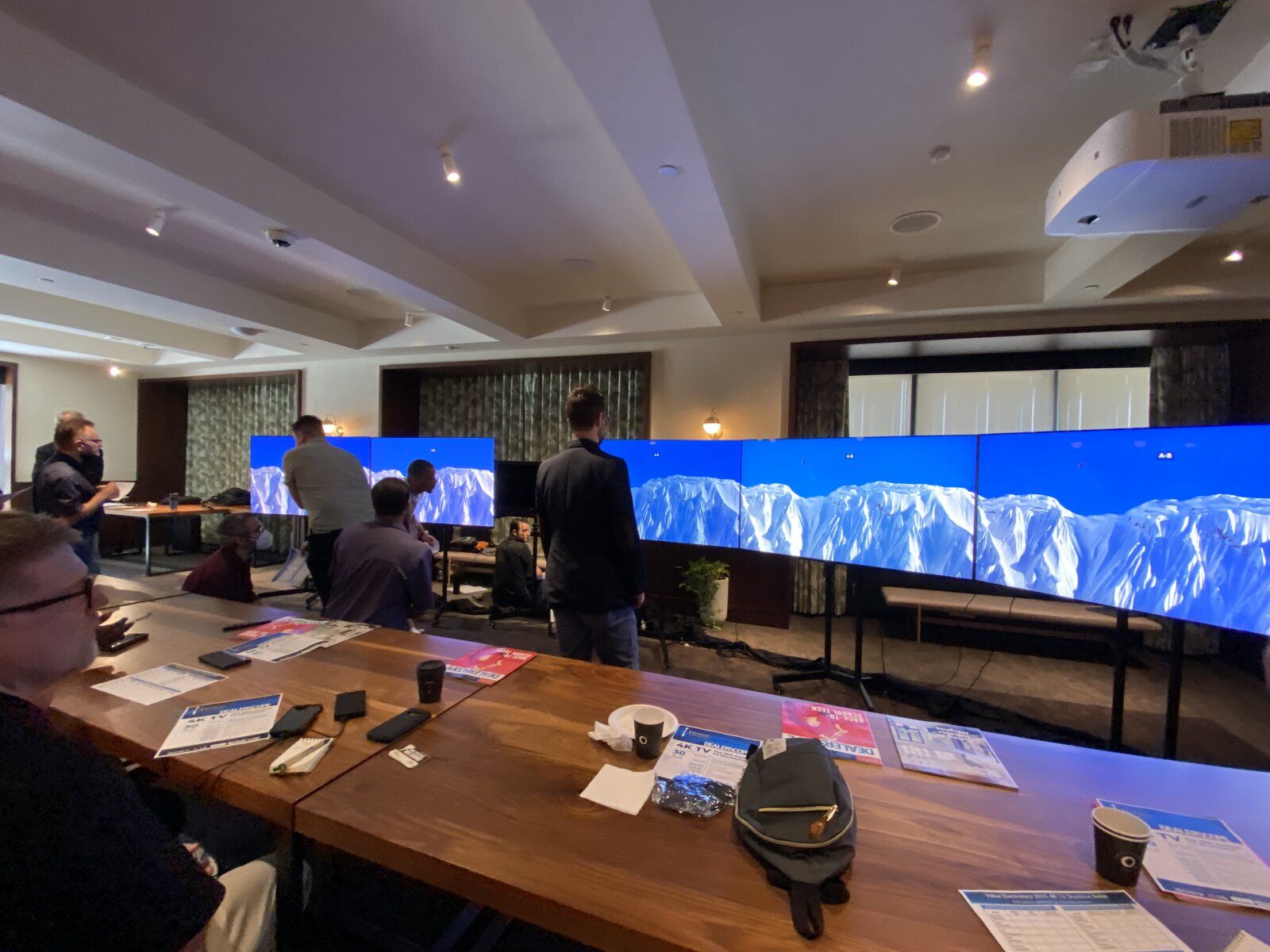 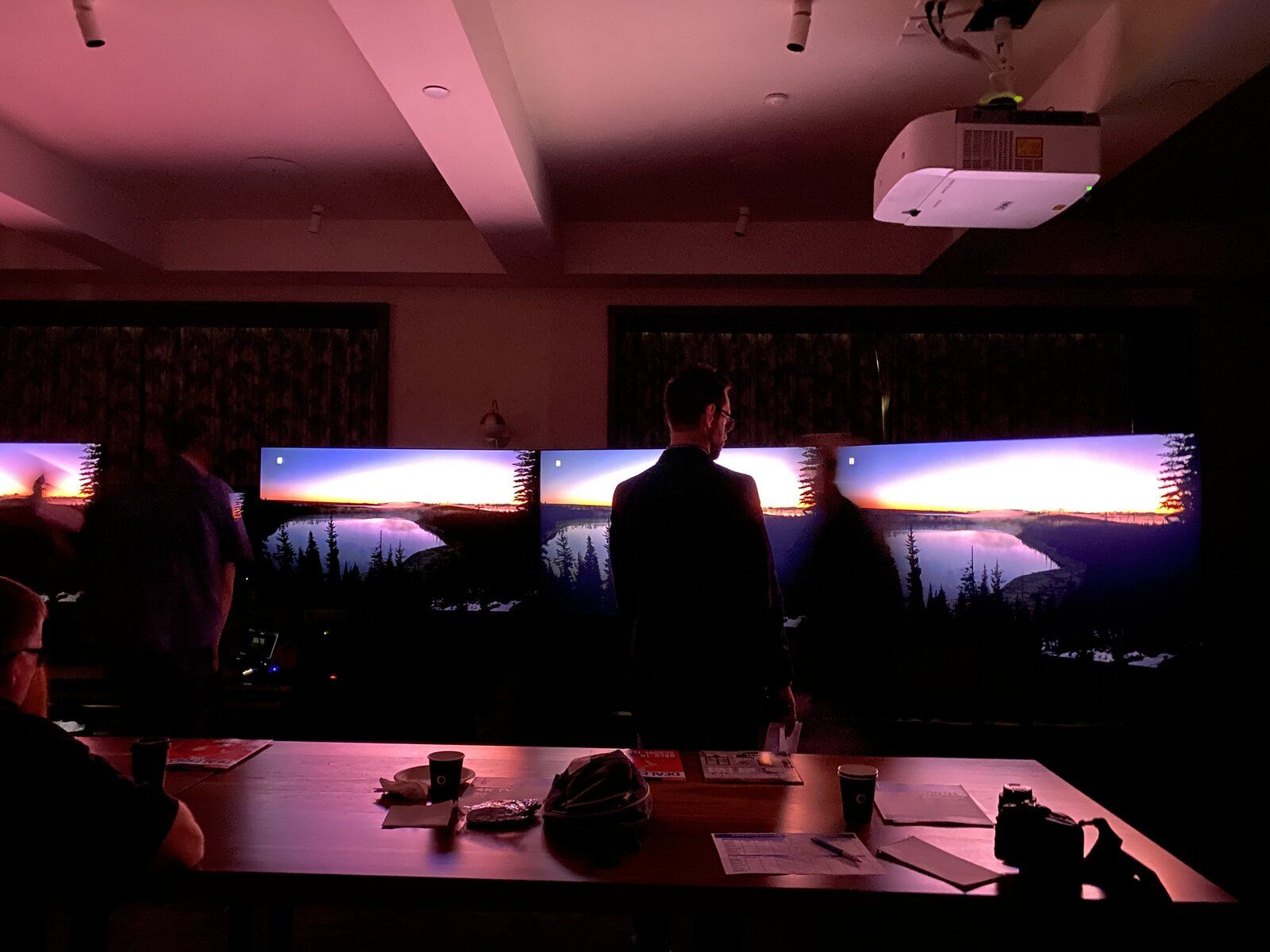 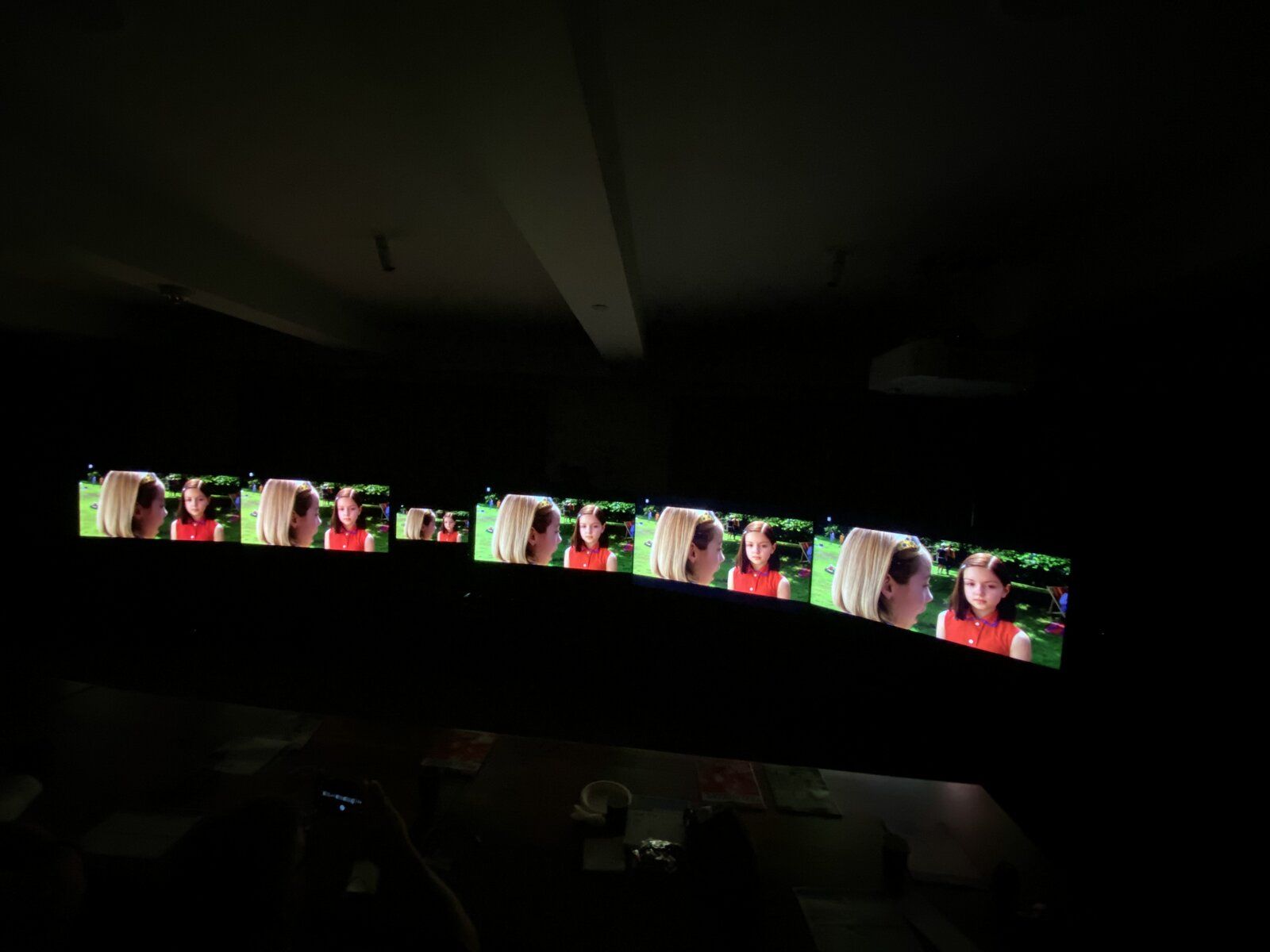 The 8K TV Shootout is going to start in 3 hours… if you have any specific questions, please ask them here and I’ll try to dig up an answer.

I’ve got a question for the manufacturers, why 8k? Why move to that when they haven’t fixed things that should be a higher priority? While they should be shooting for better color volume, proper tone mapping and higher lumens, they come out with 8k panels which simply aren’t necessary. No at home user sits that close to their display to take advantage of that resolution. Priorities seem a bit messed up.

I should add that Caleb was awesome!

Also, what’s the ETA for the new Spears & Munsil benchmark?

I have the same exact question (8k). As for Spears & Munsil, I’ll see if I can get a specific answer.

Todd Anderson said:
I have the same exact question (8k). As for Spears & Munsil, I’ll see if I can get a specific answer.
Click to expand...

8K = a marketing gimmick to get early adopters and tech nerds to "upgrade" before any traditional upgrade cycle. Reminiscent of the war of megapixels in digital cameras. Heck, my Xfinity cable TV isn't even shown 1080p and they're trying to sell me on 8K? Pass. Finally, the S&M upgrade is intriguing but also concerning as I JUST bought their most recent. Wish they would've indicated a new version was forthcoming. Any chance you can ask if they'll consider an upgrade program for those who've bought their old disk within a certain very recent timeframe? Cheers!

We're live streaming our 2022 8K TV Shootout Evaluation event. Click on the image below to join us and ask questions in the moderated chat. Starting at 12pm ET we'll have our panel discussion.

Todd Anderson said:
I have the same exact question (8k). As for Spears & Munsil, I’ll see if I can get a specific answer.
Click to expand...

I think I saw you on a video from Jason for Murideo.

It’s still in development… apparently cramming all of the various types of content onto one disc isn’t an easy task! They’ve figured it out, tho, and the disc is coming “soon.”

Also, a bit of breaking info: the disc will have help menus/guides.

No one had any information about an upgrade program… I suspect the answer is no.

mechman said:
I’ve got a question for the manufacturers, why 8k? Why move to that when they haven’t fixed things that should be a higher priority? While they should be shooting for better color volume, proper tone mapping and higher lumens, they come out with 8k panels which simply aren’t necessary. No at home user sits that close to their display to take advantage of that resolution. Priorities seem a bit messed up.
Click to expand...

Answer will be in the 8k shootout coverage… hang tight!

Todd Anderson said:
It’s still in development… apparently cramming all of the various types of content onto one disc isn’t an easy task! They’ve figured it out, tho, and the disc is coming “soon.”

Also, a bit of breaking info: the disc will have help menus/guides.

No one had any information about an upgrade program… I suspect the answer is no.
Click to expand...

Those guys deserve every penny they get out of these discs. It’s not like they’re living high off the hog from these things.

I also thought I heard it in the background yesterday that it would be 3 discs. 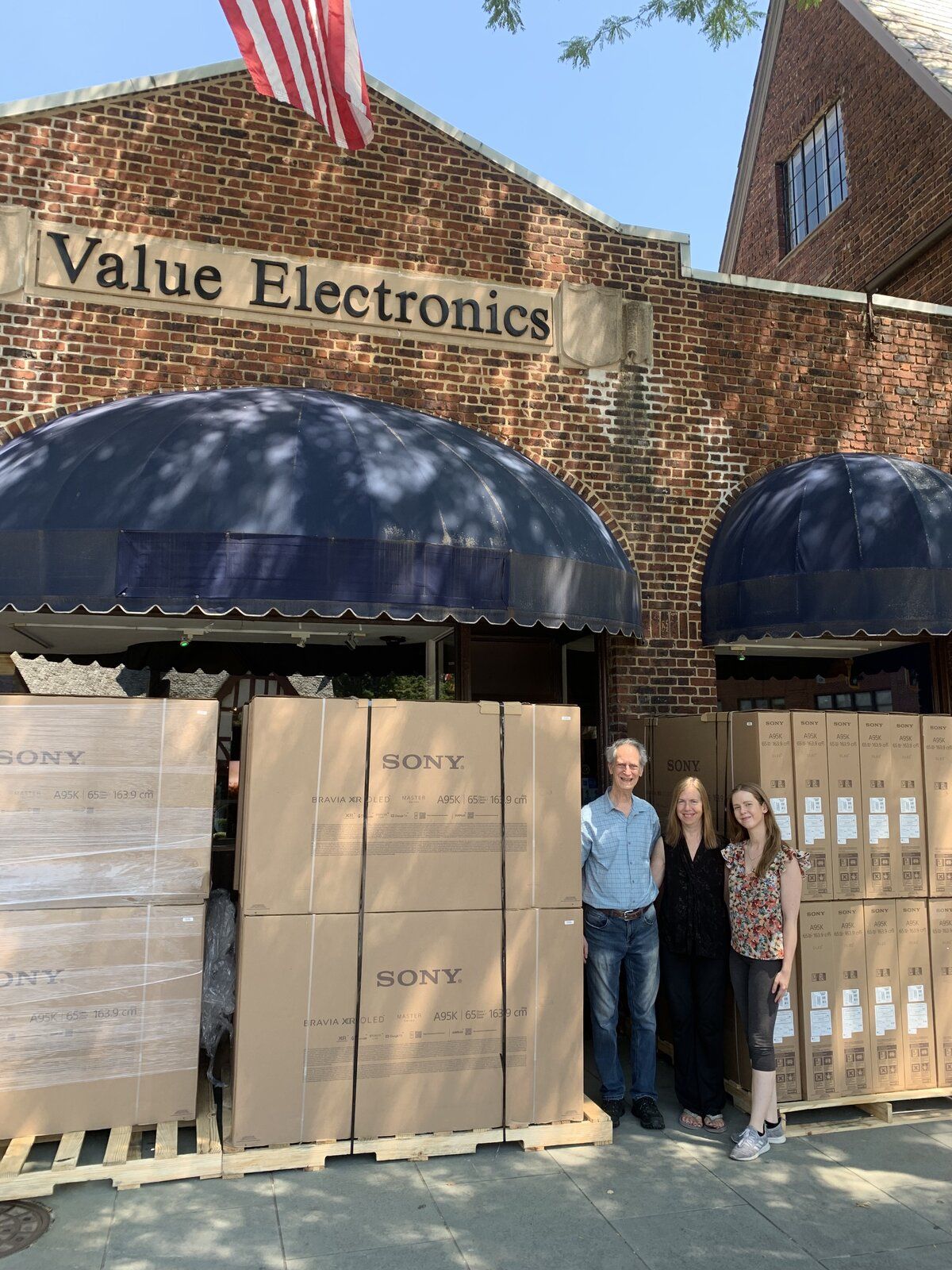