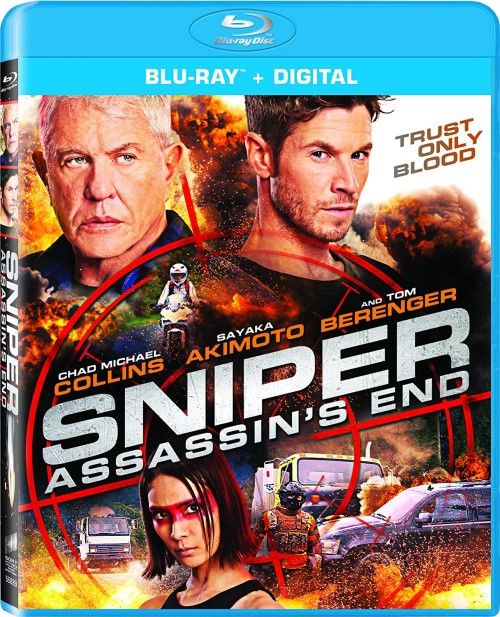 Movie
Oh dear. Does anyone remember a solid little movie called Sniper back in 1993 starring Tom Berenger. I remember it as being a good little action movie that really didn’t try to be anything but dumb fun. Tom Berenger was never a massive leading man, but he eeked out a living as a lower end B movie star, and did quite well for himself. However he found his little money maker with the Sniper films, as that original theatrical movie spawned not 1, not 2, not 3, but SEVEN direct to video sequels over the last 20 years, ending up with the 7th sequel right here today.

Past number 3 Berenger pretty much checked out of the series. He was getting older and more sluggish, and couldn’t play the action packed character as much anymore. It was then that the studios decided that he had a son in the military as well. A son (played by Chad Michael Collins) who was nearly as good of a sniper as his dad and could carry on the franchise (even though Berenger always plays a background character in the last 4 films). It was a way to push the series forward while still keeping fans of the original movie connected with these new ones.

Like the rest, Brandon Beckett (Chad Michael Collins) is in trouble. He’s been setup by a mysterious group of men who make it seem like he took out a politician. His DNA was at the scene, the gun was his style, and he didn’t have an alibi. Now Brandon has to bust out of NSA hands, kick some butt, and find out who set him up and eliminate them. However, things get a bit dicey when it’s obvious that this someone knows exactly who he is and how he things. Brandon is forced to team up with his father Thomas Beckett (the actual star of the first 3 Sniper movies) and face an enemy who knows who his is, and has a sniper on his tail that is just as good as he is.

OK, lets face it. Sniper: Assassin’s End is not high art. But it’s also not evenly remotely fun as well. The typical derivative DTV action movie tropes are at home here, but unlike The Marine movies, they aren’t even fun in a “this is so awful it’s hilariously fun” type of way. The movie just flounders around with HORRIBLE dialog (there’s a father/son moment halfway through the movie at Thomas’s cabin that is just PAINFUL to listen to, and obvious foreshadowing for what is it to come), and the action is all over the place. A few action scenes are decently filmed (like the original gunfight with the Russians), but the rest is given wild shaky cam that just makes the viewer nauseous watching it play out. I will admit, that there is a single line given by the villain (played by Michael Jonsson) that is absolutely HILARIOUS (it has to do with a steak being cooked in regards to a job done) and almost made the movie worthwhile just for how cheesy it is.

Berenger is aging and it’s obvious that he’s barely interested in the franchise anymore. The man has always been rather stoic and bland (ala a 2nd tier Nick Nolte), but it’s pretty obvious that he’s phoning it in. Chad Michael Collins does a solid enough job as his son Brandon, but he’s your typical DTV actor. Even veteran actors Ryan Robbins and Lochlyn Munro can’t really elevate the film simply due to the fact that their stories are superfluous to the rest of movie almost. Basically, this is a jumbled mess that is typical of most franchises that have gotten WAY too long in the tooth.

Rated R for bloody violence and some language

The 2.39:1 framed Blu-ray disc is quite nice to look, with some portions of it being good, while other’s are simply stunning. IMDB and other online resources don’t give any information on what cameras were used and what resolution the master is, but It’s a 99.99999% chance of being digital with a 2K resolution digital intermediate. That being said, the results are generally very nice, with good detail levels and a shiny, digital glossy look to it. Outdoor daylight shots can look exceptional, with GREAT detail and well saturated colors, but indoor shots with dim lighting can show some noise and issues with the black levels being a bit crushed. It’s a good looking Blu-ray for a low budget film and sticks to a very “good” level of quality.

The 5.1 DTS-HD MA track is about on par with the video track. That roughly translates to “a track that is generally excellent, but isn’t a crowd stunner by any means). Dialog and vocal ranges are spot on, and the more action oriented bits bring in the surrounds and bass. The gunshots ring with LFE weight and authority, and the forest scene near the end seems to have the most nuanced surround activity. Simply put, it’s a basic action track that does well enough to be considered “very good” without exceeding expectations.

Yup, not hard to guess. Sniper: Assassin’s End is bottom tier DTV and nothing is going to make it any better than it is. Tom Berenger is barely hanging on at this point, and the action is pretty mediocre (even by Sniper standards). There’s one nifty scene near the end, but the rest is forgettable drek. The Blu-ray itself is solid enough in terms of video and audio, but extras are pretty much nonexistent. Simply put, I would just skin this one unless you’re a die hard fan of the Sniper franchise and watched the rest up till this point.