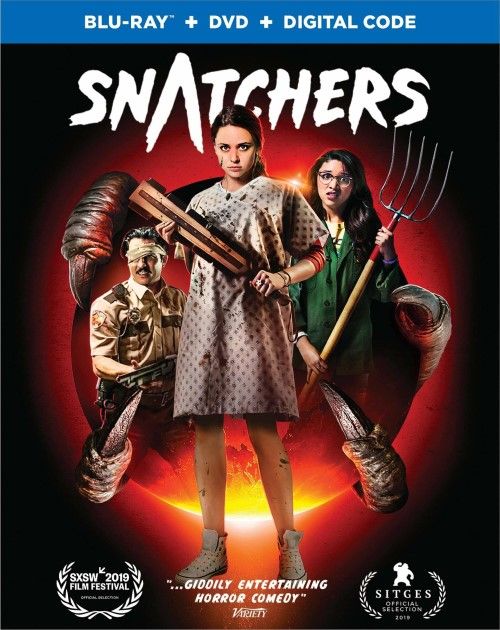 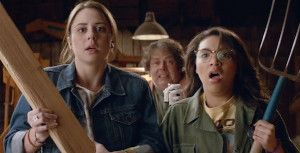 Movie
The thing about horror/comedies is, they actually have to be funny. Such is not the case with a sort of “reverse Species” indie comedy that just fails on every front. The movie tries to make fun of “hip” teenage culture, only to feel like it tried too hard to take it’s references from the 90s. It tries to be funny with slapstick scenes of gore, only to fail there as it uses score jump scare cues to say to the audience “that was supposed to be funny! Right?”. It kinda succeeds as a monster horror movie, but only in the final act of the movie when the two heroines actually duke it out with the best. Before that I was holding my head in my hands praying to the Lord almighty to just end my suffering and have my home theater system burst into flames so I wouldn’t be forced to watch this anymore.

The thing that should clue most people into the train wreck they’re about to watch is the fact that the movie has 100% critics score on rotten tomatoes, but a 54% rating from viewers. Usually that never ends well as the host of out of touch RT critics loving something while the audience dissing it is a sure sign of pain and suffering to come. Either way, I’m luckily here, throwing myself in front of the speeding bullet, so that I can save the rest of you from making the same mistake that I did…..watching this movie.

Sara Steinberg (Mary Nepi) is in for an AWESOME senior year. She’s getting ready to graduate soon, and she’s “in” with the cool kids (played by a trio of Clueless caricatures who spout nothing but “whatever!”, “sup”, and “totally cray!” and other mindless attempts at imitating teenage slang), and even has a chance at her hunky ex boyfriend Skylar too (Austin Fryberger). After hooking up with Skyler and and joining the ranks of womanhood, she ends up with a bit of a surprise, she’s pregnant. The only thing is, she just had sex the night before and the next day she’s 9 months pregnant. Going to the doctor leads them to the uncomfortable conclusion that she’s pregnant with an alien. An alien who pops out of her and starts killing everything in sight, and attaching itself to victims and manipulates them like marionettes. 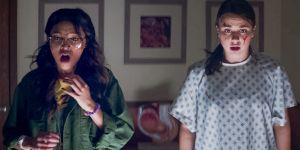 Sadly, there seems to be one more alien inside of Sara, and the monster wants to get to her for some reason. Terrified, Sara turns to nerdy “ex-friend” Hayley (Gabrielle Elyse) who tries to help her get the little thing out. Running out of time, the two girls have to figure out a way to get this monstrosity OUT of Sara, as well as make sure that the two creatures are killed before they can replicate and destroy the entire world. You know, you’re typical weekend for a teenage girl.

Snatchers unfortunately hits every cliche in the book as well as being unfunny and not THAT gory. Sara and Hayley stopped being friends so that Hayley could move up in society, the girls learn they’re still besties once they have to team up to kill a monster, they kill said monster, and live happily ever after. After doing some digging it comes to light that the movie is not as “fresh” as you would expect. It turns out that this wasn’t a feature film at all in the first place. It was a series of webisodes that was strung together over the course of a year and a half at Sundance film festival. Then the show’s second and third “season” was canceled, so the writers created a second half and turned it into a feature film. The seams of the webisode nature of the product doesn’t really show, which I have to give them credit for, but that still doesn’t mean that the end product is any more garbagy than it already is. 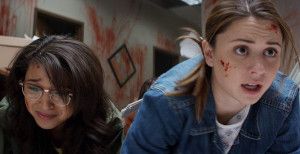 I can’t find any information on what cameras were used or the resolution of the master, but coming from a cheap webisode series, I’m guessing we’re looking at basic digital cameras and a 2K digital intermediate. The series (movie, whatever it is) is bright and shiny, with glossy daylight sequences and neon colored night shots. Colors are very hot and warm, and the saturation levels of the reds of the monster are through the roof. The detail levels are good, but never seem to be great. At first I thought we were looking at a truly excellent transfer, but if you look at faces and close ups you start to realize that they look a bit smooth and soft. Blacks are generally deep and inky, but sometimes I noticed they looked a bit washed out. A very good transfer, but one that doesn’t really put the time and effort to be truly great.

The audio is also solid, but you can definitely tell this was meant as a cheap webisode series, as the track feels a bit thin. The dialog is well placed and anchored in the front of the room, and the surround show plenty of activity once the monster is terrorizing the fictional town of Madre Vista, Arizona, but they all just sound a bit “thin”. Bass is there and adds some thump, but that weighty feeling is just missing. The same with the rest of the track. It checks off most check boxes quite nicely, but that feeling of depth and weight is missing. A good track, but one that doesn’t really stretch it’s limitations much.

Snatchers was…..well...interesting to say the least. It tries an old take on teen comedies, but adds in gore and over the top slapstick humor to try and make it relevant to modern kids. Sadly it does neither very well and it’s not until the third act that I actually started eeking SOME enjoyment out of the film. I give them credit for trying something different and new in the horror genre, but it really doesn’t muster up more than a few chuckles, and gore hounds won’t find much interesting in it either. The Blu-ray is solid enough though, with good video and audio, but the typical moderate extras. Personally, I would skip this entirely as I can’t even muster up enough energy to say that this is the worst movie ever made, or even give a recommendation as a cheap rental. No, just no.

Thanks for the review. Will skip it based on your recommendation.

I had my eye on this one. Glad you were able to review it. I will skip it too.