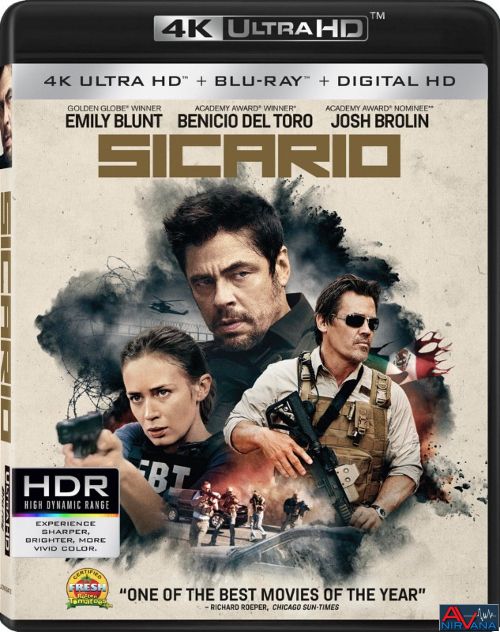 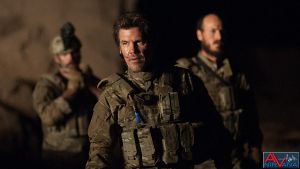 Movie
With the release of Sicario: Day of the Soldado in a few days I figured it would be time to bring across an older "legacy" review that was done several years ago for Sicario on 4K UHD. All of hte thoughts in this film are from when I reviewed it in 2016, just with a tweaked video score as the TV I had back then had really poor HDR support and I've updated it to match the better tech of the Sony 65x900E that I'm viewing it with now.

The war on drugs has been waged long before the famed term “the war on drugs” even came into the picture. Mexico and other Latin American countries have become a hot bed for the creation and distribution of said chemicals/plants and the flow through our southern borders has spiraled out of control. We’ve seen other such movies and TV shows like “The Bridge” and even older more stylized takes on the drug trade such as Tom Clancy’s “Clear and Present Danger” depict the terror and violence these drug cartel leaders will reign down on anyone who stands in the way of their profits. Then in slides Sicario to the mix, sliding under pretty much all radars at the theatrical release, and leaving me with a few “yeah that was a great movie!” from personal friends to go by. I wasn’t even sure WHAT to expect when I sat down to review the film, but left with my jaw hanging on the floor wondering just WHY this film didn’t get the accolades it deserved.

“Sicario” is roughly translated as Hitman in the Mexican language, but also comes from the Latin word “Sicarius” which was used to describe Israeli zealots who underwent assassination as a means to their ends. To put it mildly, FBI agent Kate Macer (Emily Blunt) is going to be put into EXACTLY that same position. After a kidnapping case in Phoenix Arizona unveils some times to the Juarez drug cartels, she is asked to join an interagency task force to take down a shadowy drug cartel leader somewhere deep within Mexico. Desperate to jump at the chance to take down the guy who has caused so much damage in her home, Kate joins up with mysterious government agent Matt Graver (Josh Brolin) and heads out to “El Paso ish” only to find out that her adventure is just beginning.

Their little trip down to El Paso ACTUALLY ends up being a little trip across the border to extricate one of the cartel member’s upper echelons back into the United States. The trip naturally goes south near the end and Kate comes to realize that maybe there is more to these guys than meets the eye. Military crew, operating outside the law and filled with a few members that just seem “off” to her. Kate desperately wants to do things by the books, but every second she’s with these men she sees things that shakes her faith in the establishment and causes her to reevaluate everything she’s ever believed in. 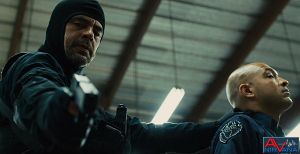 If I sound a bit cryptic it’s most definitely on purpose. Saying anything is almost giving away plot points, as every step of the way is another step outside of the darkness for Kate, but also for the viewer as well. Director Denis Villeneuve does a superb job of keeping everything under wraps and keeping the end goal just as plain as the nose on your face, but still shrouded in mystery and intrigue. The intensity is simply visceral, as my heart was pounding out of my chest during the entire movie. Not every scene was peppered with action, but there is a sense of tenseness and a sleeping ferocity that just doesn’t go away, even when Kate and her partner, Reggie (Daniel Kaluuya) are sitting at a bar drinking a beer with friends.

What makes Sicario so powerful is the sheer amount of grey material that it covers. Kate is a very black and white person, which is what sets up the conflicts later on in the film, but the rest of the entire operation is shrouded in grey. There is very little right, very little wrong, just areas that you can see the positives and negatives of their actions. I Even found myself partially siding with Agent Grazer and even the mysterious Alejandro (played magnificently by Benicio Del Toro) held my sympathy. I can say “hey that’s against the law!” in some spots, but I can see the need and goals they were attempting to stake out. While I can point out the simple laws of the land, their tactics certainly have as much positives to them as the negating realities. Kate is stuck in the middle of all of this, desperate to keep to the black and white path that she’s grown up with, and her journey to Mecca (so to speak) changes her in ways that she couldn’t possibly have imagined by the end of the film. It may not always be a good change, but believe me, there are definitely some changes.

The characters are really what make this drama, and they are all handled with precision and loving care. Benicio Del Toro is the standout here as the shadowy and mysterious Alejandro. There’s a million different theories about who he was and where his allegiances lie, but it’s the evolution of watching him and finding out his motives that really make the character worthwhile. He plays the role softly and simply, but so precisely that you cannot take your eyes off of him. Even when he’s seemingly making little to no facial expressions. Emily Blunt is mesmerizing as Kate. She wants so very much to believe in the rule of law, even in the face of all this gray area, but even her faith has to be shaken and broken at some point. Brolin revels in his role as Grazer, just having fun as the boss who’s in charge, with very little oversight. He never stands out, but does the role so perfectly that any less would have been a travesty. There’s a couple cool little cameos, such as Jeffrey Donovan as a shadow agent (from Burn Notice fame) as well as getting to see Shane from “The Walking Dead” even pop in as cop friend of Reggie’s.

Sicario was shot with Arri Alex digital cameras and looks razor sharp for a majority of the picture. The desert areas of Mexico and Arizona (my home area to be exact) look dusky and beige colored, with incredible detail to the desert landscape around them. The dust is cloying and hangs in the air, creating a heavy looking picture that manages to be just as accurate as could be. Outside of the area, when they are in the dark, or out in the Mexican pavilions, the picture darkens up and gets intensely black. I noticed that the desert scenes leaned a bit towards a yellowish hue and the beige overtones accentuated that little bit of grading. the fine detail is amazing, with sharp clarity and perfect imagery all the way around, including the lines and nastiness of the dead bodies in the drug houses as well as the native desert landscaping as well. There’s a little bit of noise in the final assault on the drug tunnel, but it’s mild and blends in with rough look of the night vision goggles being used. There is ONE scene that I noticed some banding in, and that was in the drug tunnels. It’s rather blatant and obvious, but overall I didn’t notice any other abnormalities in the black levels. I used to rate the 4K as a 4.5/5 when this first came out, but that was back when the 4K UHD format was in it's infancy, and many other transfers have done better due to the technology maturing. There's some softness to the picture that brings it down to a solid 4/5, but in no way is a huge negative. Just a reminder that some of the original 4K UHD titles aren't as perfect as the ones we get today. Still a very excellent looking disc.

Intense and visceral, Sicario has a stunning Dolby Atmos track (with a 7.1 TrueHD core for those of you without Atmos equipment) that just doesn’t let up from beginning to end. Dialog is strong and clear, without any abnormalities in the mix and the sheer ambiance factor of the track is off the charts. There was such a realistic sound to the film and a wonderful mixing of the mains with the overheads that you know you were right there in the middle of the firefights. Each tone, each gunshot, each footstep was distinct and razor sharp with a texture that was unique to each situation. The surrounds and overheads were in constant use as the Mexican gunfights blasted all around, or the roaring of a black SUV tore past their location. Even the simple sounds such as a pebble rattling down the hill after a Delta Force soldier knocks it off is perfectly distinct and directionally recognizable. LFE is guttural and earth shaking, as it adds power and impact to the M4 carbine rifles as well as some great effects with the vehicles. Simply superb from beginning to end.

Movies like Sicario don’t come about very often, and when they do it’s something that serious movie goers should treasure. Especially in today’s fluff riddled movie environment. Besides a few cheesy lines of dialog, Sicario weaves an intricate, but completely plausible narrative that manages to keep the viewer AND the main character in the dark equally as well. Twists and turns keep the waters roiling with intrigue and the finale is enough to leave you feeling like you were gut punched, but also nodding enthusiastically at the seeming necessity of the situation. The Tech specs for the film are excelletn and if it were not for just an adequate amount of special features and a slightly soft picture, this disc would be just about perfect. Still, it was one of my favorite movies of the year and the incredible video and mind blowing audio create a fantastic viewing experience, and this upgrade to 4K is just what the doctor ordered.