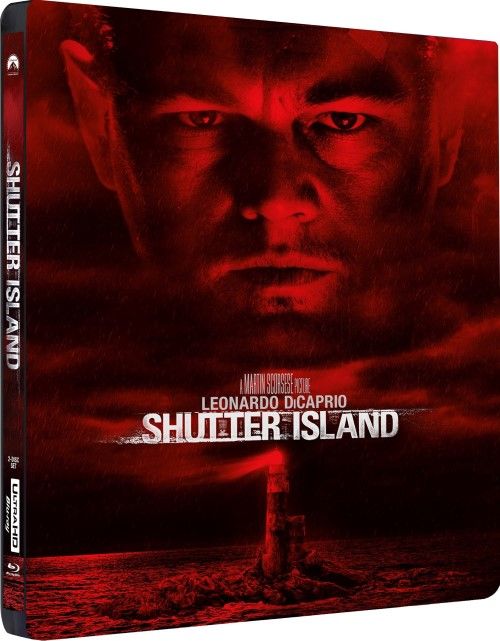 Movie
Paramount has been on a string of re-releasing catalog titles in steelbook collector’s edition form for the last 4-6 months, but this time it’s a bit different. We get a catalog title in a nice new shiny steelbook, but it’s also the 4K UHD release at the same time. Meaning, we get a bit of BOTH types of collecting going on here. A little steelbook love and a little 4K UHD love all mixed together. To kick off this new trend (at least HOPEFULLY it’s a trend, I want more catalog Paramount movies in 4K UHD) we start with the 10 year anniversary of one of the best Martin Scorsese films to never win an Oscar, Shutter Island.

I remember missing this in the theater back in 2010, but VIVIDLY remember blind buying the film on Blu-ray and being blown away by the twists and turns of the psychological mystery. It was a drastic change of pace from the typical crime thrillers that Scorsese was so famous for, and had me guessing that there was going to be another double take, another twist, another mental “gotcha!” up until the very end. Sure, it doesn’t have THAT much suspense as you can guess some of the twists coming, but the film is so superbly acted, so incredibly crafted in terms of set pieces, and so meticulously directed that I was honestly expecting another twist and turn to completely subvert my guess work. Even when that didn’t play out I didn’t feel let down at all, as the film was so lovingly created and so powerfully and forcefully acted that it was perfectly alright to accept the journey as the prize.

U.S. Marshall Teddy Daniels (Leonardo DiCaprio) and his new partner Chuck Aule (Mark Ruffalo) have been called into Shutter Island, a mental institution for the criminally insane, to investigate the mysterious disappearance of a patient who murdered her three children several years ago. However, something doesn’t seem right. The head psychologist, Dr. Cawley (Ben Kingsley), seems nice enough, but the entire demeanor and careful deliberation of the staff puts Daniels on edge. He knows there’s a secret that they won’t tell him, and every gut instinct he has tells him that there is something going on. The more he digs, the more he finds what he doesn’t want to know. A conspiracy where the staff is experimenting on patients, turning them into something they’re not, and he and Chuck very well may be the next “patients” to occupy Shutter Island as part of the insane.

I said a few paragraphs back that Shutter Island is a bit predictable if you really think about it, and that IS true. About halfway through the movie you start to pick up little clues and little hints about where the true direction of the film is going, but by the time the movie gets around to confirming some of these expectations and predictions you’re not really caring about the mystery and the “whodunit?” shrouding the first 2/3rds of the movie. Now you’re mesmerized and held captive by another tale about a tortured soul. A man who’s so eaten by up his past that his present and future are covered in a haze of anger and fear. I can’t give too much away for those who HAVEN’T seen Shutter Island, but this is a story about inner turmoil and introspection on a man’s life.

Martin Scorsese expertly handles all three phases of the film, guiding us through the typical mystery first act, a chaotic conspiracy theory second half, and finally ends it on a somber not with the introspective and highly emotional 3rd act. Each act acts as a chapter or phase of the film, allowing the viewer to see another facet of the insanity going on, and ultimately coming full circle and completing the arc that it started on the boat into Shutter Island. The visuals themselves are haunting and melodic, filled with flashbacks to Teddy’s mind. His experiences in the great world war, his dead wife, and all of these done in a sort of surreal and esoteric way so the viewer is absorbed straight into the fantasy world of the film. It’s artful, beautiful, and horribly tragic, but ever so effective at keeping the viewers attention.

Rated R for disturbing violent content, language and some nudity

Wowza. that’s all I can say here. Shutter Island was a fantastic 1080p encode 10 years ago (one that has held up surprisingly well to this day) and the new 4K UHD encode (seems to be taken from the same 2K master from 2010 from my eyes and research) is a prime example of a 2K upscale looking amazing in 4K. The 35mm film is gorgeous to look at, with cool blue overtones and fantastically nuanced set pieces making this a rich and varied looking disc. The dark recesses of the solitary confinement area is harsh and ridden with deep black shadows and flame lighting, while the outside garden is full of thick greenery and bright daylight. Details are incredibly fine and revealing, showing every pore of DiCaprio’s face, as well the rough hewn stone walls, and the little fibers from Chuck’s tweed jacket. It’s a great looking disc and honestly a marvel to behold. Usually the 2K-4K upscales show some cracks and seams in the upgrade status, but this one is about as perfect as I’ve ever seen, as the HDR enchances all of the earth tones and deep black levels of the film. Everything is just that much richer and more defined in the color department, and while the differences in colors are subtle, they are very VERY much appreciated on the 4K UHD disc.

I’m never sure what the reasoning behind Paramount’s choice of choosing which 4K UHD catalog titles get an upgrade to Atmos or DTS:X, and which ones carry over the lossless audio mixes from the Blu-ray. It seems hit or miss, with some titles getting the upgrade, and others still porting over said Blu-ray audio. Whatever the reason is, Shutter Island retains the same potent 5.1 DTS-HD MA tract that was found on the 10 year old Blu-ray, which is in fact a fantastic track. The mix is not overly heavy or aggressively loud, despite being a somber and heavy thriller, but instead features a ton of nuances and subtle sonic changes to make up for that. The bass still comes through heavy and pronounced with the thundering downbeats of the score, or the roaring of the surf around the island, and the entire sound stage is filled with all sorts of background noises. The chirps of birds in the sanitarium garden, scrapes and scratches in the deep isolation halls, and whispering wind as it flickers through tall grasses. Dialog shows massive dynamic range, with one moment hushed whispers barely being heard, and the next Teddy screaming at the top of his lungs. While not an Atmos track, the 5.1 mix is till just as potent and fantastic as it was 10 years ago.

• Behind the Shutters
• Into the Lighthouse

I always say to friends that Shutter Island is probably the most bizarre Martin Scorsese film that he’s ever made. Not in a crazy sort of way like Terry Gilliam or Takashi Miike, but definitely more intellectually artistic than any of his previous films. The movie is a tough film to do properly, as the material and acting strains are massive according to the interviews I’ve read. DiCaprio completely absorbed himself into the role of Teddy, and his intensity and sheer ferocity seeps through from every fiber and pore of the film’s essence. It was the film that I felt SHOULD have won the 2010 Oscar for Scorsese, but sadly went unawarded that year. Paramount’s 4K UHD disc is stunning, with a picture perfect 4K encode and the already great audio mix from the Blu-ray (along with the same meager extras from the Blu-ray as well). Definitely worth the upgrade.

Thanks for the review. I saw a preview of this once sometime back and wanted to check it out but didn't have the time. As a fan of Scorsese, will check it out.