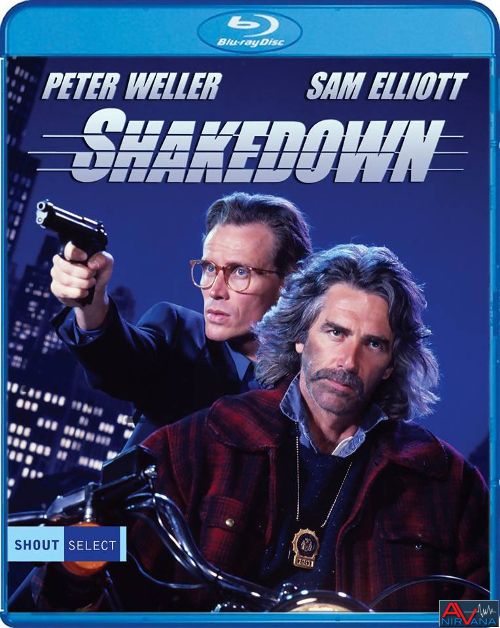 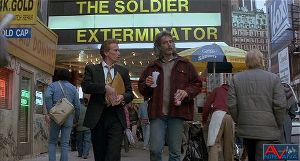 Movie
One of the things that I really love about Shout Factory is their ability to pull out random titles from the 80s and give them new life on home video. Shakedown (or Blue Jeans Cop as it was known in Australia) is one of those films that you would expect to be lounging around in a box of old VHS tapes in your basement, or in a double feature as a Walmart special. It was a niche action film at the tail end of the 80s that really embodied the best and worst parts of that decade of film making. Shakedown was met with mediocre success at the box office, but has always held a guilty place in my heart for being totally out of left field, and full of that great velveeta cheese that the 1980s action movies were famous for. Weller and Elliott were huge draws, and the two playing the rough and tumble cop/lawyer buddy duo is fun to watch despite some very low budget writing (director James Glickenhaus wrote and directed this little nugget, and even shows up to introduce the film at the beginning of the Blu-ray).

A drug dealer named Michael Jones (Richard Brooks) is held up by a dirty cop and subsequently is forced to kill the man in self defense. The only thing is, he’s a known criminal, and the person he shot was an undercover police officer, so who do you think the jury is going to believe? Brought in as public defense is one Roland Dalton (Peter Weller), a man who is getting out of the public defense world and moving into Wall Street as the lackey of his rich girlfriend’s father. With only one week left as a public attorney, Dalton just wants to get this case over with so he can get on with his life. However, he seems something in Michael Jones. A truth that nags at the inner conscience and refuses to let go. Digging into the matter deeper, Dalton soon finds out that the boys in blue protect their own, and dirty ones fight even harder than the criminals.

Teaming up with narcotics agent Richie Marks (Sam Elliott), Dalton and the rough n’ tumble cop poke the bear and start to follow the threads back to its source. A source that may turn out to be tougher than the two can handle (yeah right! This is an 80s action movie!) Things get even more complicated when one of Dalton’s old flames (you know, the one that got away) turns out to be the prosecuting attorney, which brings a set of conflicted emotions to the surface, and even garners itself its own sub plot with your typical 80s finesse (or lack thereof). 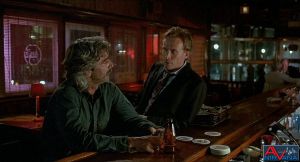 Shakedown is a hilariously fun/bad/awesome movie that just begs to be watched if you grew up in the 1980s. Director James Glickenhaus only made a handful of movies back in the 80s and 90s, but he was probably most famous for the 1980 cult hit The Exterminator. Shakedown was his attempt at mimicking the fun and lunacy of Lethal Weapon, but he just couldn’t decide whether to make itself a serious court room drama, or a crazy unbelievable action movie. You can tell that they really tried to make this serious with all of the long court room diatribes, but the insane action sequences really throw all that out the window. I mean, we’ve got Sam Elliott running around with a .45 magnum Lar Grizzly hand cannon, shooting perp’s in broad daylight, gun slinging thugs with wrist launching knives, one liners like “Ok whitebread, make my day!”, and gun shots setting off gas tanks like they’re filled with dynamite. Yup, it’s exactly what you would expect. A mishmash of serious drama and ludicrous action with a big double helping of 80s cheese on top.

It’s fun to look back at the movie and see how different films are made today. Just look at the movies playing at the local cinema when Dalton and Richie pass by them on the street. At one time you see Death Wish 4: American Justice up on the billboard, and another is Steel Dawn, or Deadly Illusion. Shakedown just embodies the excess and non PC rawness that permeated the 1980s, and Glickenhaus just has fun with the low budget action movie. Weller and Elliott are having a good time (well, Weller is, Elliott looks consistently ticked off in a rye sort of way in all of his movies), and the movie revels in that sort of cheesy schlock mentality of the times. While it is in NO WAY a great movie, Shakedown is a hoot and a half, especially if you grew up watching films like the Death Wish series, or films like The Exterminator. 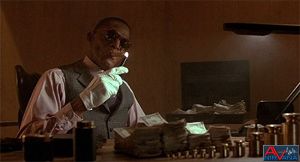 Shout Factory didn’t mention that Shakedown had gotten a new remaster or anything (which is almost always an indicator that there hasn’t been one, at least for this release), but the master for the 30 year old movie is actually in pretty good condition. Quality can vary, but most of the time the 1.85:1 framed film looks really nice. Outdoor daylight shots are revealing and color has plenty of punch, but darker shots can have some pretty heavy moments of film grain applied. Those shots can show some marring of the detail levels, especially in really low light shots where it almost looks like noise. Blacks are dark and inky, with only a few shots where the blacks get washed out (also composite special effects with green screen show their age a bit). Besides those issues, the film really does look really nice, and LEAPS better than my old Universal DVD. 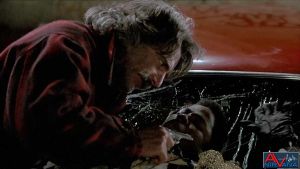 The film comes to Blu-ray with a single 2.0 DTS-HD MA track that sounds more than capable considering the shoe string budget used for the movie. Dialog is usually good, but I did notice that the background music and foreground action seem to drown them out once in a while. The track is spacious enough for a 2.0 mix, but does feel a bit thin, without a lot of mid range punch for the action scenes. The mix isn’t bad by any stretch of the imagination, as the track is clean and clear, with no signs of clipping or crackling anywhere to be heard. It’s just not as “punchy” as 80s movies were known to be. 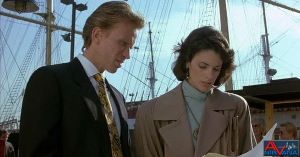 Shakedown marks the 40th film in Shout Factory’s “Shout Select” lineup, and even though it isn’t labeled as a collector’s edition, comes with an intro by James Glickenhaus himself, and a nice slew of new extras for the film’s release. I was a little disappointed with the fact that we didn’t get any new content with Elliott or Weller, but the new commentary is well worth it and some of the others are quite good. Audio and video are a nice upgrade from the beat up old 2004 DVD Universal released almost a decade and a half ago. It may not be high art, but fans of 80s action movies will be sure to get a kick out of it and this is easily the best presentation the film has ever had. Recommended as a fun watch.