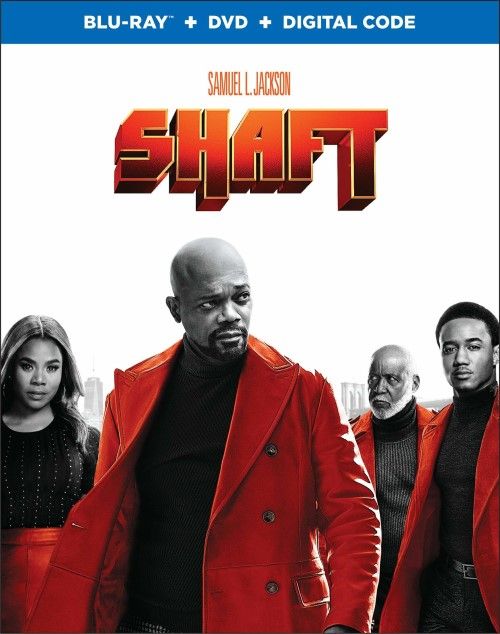 Movie
Before I go any further I have to say this. Does Samuel L. Jackson ever age? Seriously! The man is 72 years old here, and still kicking butt and taking names while looking almost identical (outside of some well earned pudge) to how he was 20 years ago when he made Shaft in 2000! Well, with that out of the way, on to the regular review. I actually really liked Shaft 2000 a lot, and felt it was a rather under rated film. The movie got some lackluster press due to many people thinking that it was a reboot of the classic 1970s Shaft movies with Richard Roundtree, and didn’t realize that it was an actual sequel (Jackson plays the original Shaft’s son bearing his same name, giving the movie his own personal flair while still sticking to the canon that came before it). Now, I don’t think anybody expected a sequel to that movie some 19+ years later, and it seems that a lot of people still don’t as Shaft 2019 came and went from theaters in the blink of an eye.

Reading a bunch of reviews of the film beforehand gave me a sort of gleeful desire to see it, even though I wasn’t so sure that Sammy boy could pull off a tough action role in his 70s (I will say this, I was definitely wrong about that). All of the reviews literally lit this thing on fire like it was a bag of dog poo, then through it on Warner’s doorstep and ran away screaming of misogyny, homophobia, sexism, stereotypes and how “society has moved on from this type of garbage!” and “this is like those old buddy cop movies from the 80s a plague upon decency”. Not to mention my favorite, “only right wing neanderthals could enjoy this!”. Looking at rottentomaties and metatcritic it seems like the critics all gave it horrible reviews (RT has it at 32%), but the AUDIENCE scores seem to show something a lot different (RT audience reviews were 94%). With that in mind, I rather gleefully sat down to watch Shaft and I have to diverge from my critic peers. Sure, the film isn’t perfect, the humor is sometimes over done, and the end is a bit cheesy, but this is pure testosterone fun.

The film rewinds us back to the late 90s when officer John Shaft (Samuel L. Jackson) his targeted for an assassination attempt by local drug cartel member “Gordito” Carrera (Isaach De Bankole) with his family in the car. Wife/Girlfriend (the movie doesn’t say) Maya (Regina Hall) freaks out after the incident and takes their newborn son JJ with her in an effort to make sure the violence that follows Shaft doesn’t harm their child. Fast forward to the present and we see JJ (Jessie T. Usher) all grown up thanks to his mother Maya. He’s gone on to become a computer analyst for the FBI and is your “stereotypical” millennial. Skinny jeans wearing, coconut water drinking, slightly nerdy kid who’s living with the modern definition of masculinity as his guide. After a friend of his dies of a mysterious overdose that seems out of character for the reformed junkie, JJ is forced to turn to the one person from his life who may be able to peak into the seedy underbelly of Harlem for him and get the information he needs. His missing father, John Shaft.

Shaft (the third title in the franchise to simply be named Shaft) is a bit different than the 1970s movies, and actually different from the 2000 sequel with Samuel L. Jackson as well. The 2000 film was a very gritty and hard crime drama, without a lot of the ladies man “playa” mentality that the 1970s films were known for, and instead infused the new John Shaft with a bit more anger and a penchant for more violence (fits with the late 90s much more than the 70s era). However, Shaft 2019 is more of a humor filled buddy cop movie. The player mentality is back in full swing, with Isaac Hayes classic theme song playing in the background, while Shaft Sr. cheerfully hits on women half his age, and harasses his millennial son about not getting laid enough (and more than a few jokes about him maybe being gay).

The flick is an over the top genre mashup with old vs. new clashing in epic proportions. JJ is horrified at his “misogynistic” father’s brutal tactics, while Shaft Sr. is constantly banging his head against the wall at what he considers the wussiness of modern masculinity (can’t really fault him there). While I absolutely loved most of the film, I did have a few problems with characters here and there, and some of the humor got a bit overbearing. I mean, if JJ was an actual wuss like his father thought I might have given the film more credence for trying to juxtapose the older generation from the new, but JJ himself turns into the high flying tough guy, who just so happens to be a pacifist most of the time, even though he knows how to be a gun wielding tough guy (there’s a scene where his friend Sasha has been friendzoning him the entire time, but once he whips out a Kel tec .380 and start slow motion gunning down bad guys you can literally see her eyes light up with erotic glee). The movie can get a bit too jokey as well, infusing a bit too much humor into a film that could have benefited from more seriousness. The ending also was a bit too cheesy, with JJ turning into a modern clone of his father, just with slightly different sensibilities, and kind of undercut the relationship a bit and turned it into a cliché.

Shot using the typical Arri Alexa cameras and finished at 2K, Shaft is a good looking 2.39:1 framed Blu-ray. The color grading is rather neutral most of the time, with a slight push towards blue here and there. Bright red jackets stand out, as do blood spry and other primary colors dotted throughout the city landscape, but the movie is really kind of grim in many ways. it’s dingy and dull in some aspects, with detail levels looking great, but never amazing if you know what I mean. There’s a softness to the film that hides just behind all of the sharp details and keeps the picture from really being a stand out production. HOWEVER, there’s more than enough details to go around, with clothing and close up shots of faces showcasing strong clarity, and even city backdrops looking textured and nuanced. Black levels are generally strong, though I noticed some very mild color banding in a few scenes (including the opening one).

Warner has once again given the film a rock solid Dolby Atmos mix, and like usual standards have put a 5.1 mix as well (this time Dolby Digital instead of the DTS-HD MA they were doing for a while), and thankfully has put the Atmos track as DEFAULT, which means you won’t have to go into settings and change it over from the lossy track like before. The Atmos track is really impressive, giving this action film the action track that it deserves. It’s loud, rocking and full of bass as gunshots ring out and Shaft’s muscle car roars around town. Dialog is crystal clear and perfectly balanced, and the surrounds are filled with plenty of sonic action. My only complaint is that the overheads really aren’t used a whole lot, and there’s not a lot of scenes that really COULD utilize them. Still, it’s a very nice track and one that fulfills all of the expectations of an action sound track.

Is Shaft 2019 a “sensible” film? No. Is it a politically correct film that fits in with modern sensibilities over race, sex, and women? Not even in the slightest. But that’s kind of the joy of this film. It’s a movie that feels like it should have been made 20-30 years ago, and fits in better with the 80s and 90s in terms of tone, something that I have sorely missed from modern action movies. The humor is a bit much considering how dark and gritty Shaft 2000 was, but it’s a fun little flick that fills a void in this classic action junky’s heart in ways that I didn’t think it would Warner’s Blu-ray is very solid, with good video, great audio and some decent extras. Shaft 2019 isn’t a GREAT film, but it certainly is fun in a machismo sort of way, and certainly a fun watch.