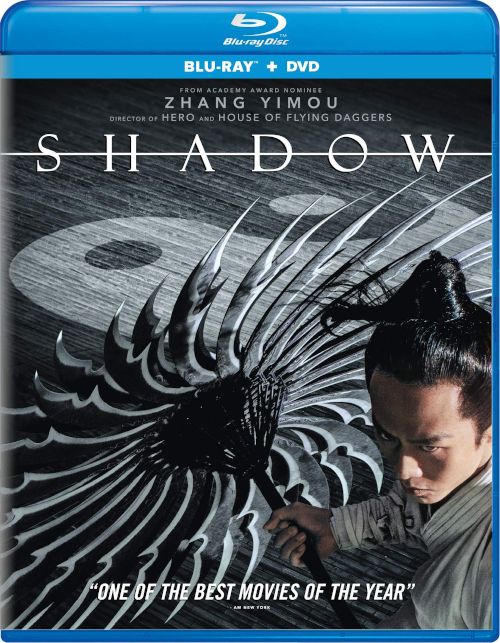 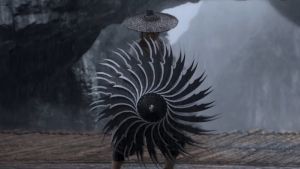 Movie
Yimou Zhang has had a long and illustrious career, with many “solid” films interspersed with films that made him a legend. This is the director that gave us House of Flying Daggers, Curse of the Golden Flower, Jet Li’s Hero, along with the U.S./Chinese collaboration film The Wall with Matt Damon (wasn’t he best film, but Yimou was given solid marks for trying to blend western action with hi flying Chinese period piece action). Shadow has been a film that’s been anticipated for quite a while for home theater enthusiasts, not just because it’s a return to form for Yimou as an epic storyteller, but because it’s the very first time that Well Go USA is releasing a 4K UHD disc. So you can bet your bottom dollar I was stoked to check this one out when the 4K disc showed up at my house this last week.

Ang Lee pretty much revamped the entire Wuxia community with Crouching Tiger, Hidden Dragon, and the world of high flying martial arts has never been the same since. Many have copied it’s style and visual flair, but none have succeeded at matching the sheer level or artistry that was involved with the film. Yimou Zhang appears to be doing the same thing in terms of style, making something so classic and so well used his own, and the cinematography world may never be the same. Shadow is equal parts artistic costume drama as well as it is a political action thriller, and with the inclusion of the film’s trademark monochromatic look (pretty much black and white at this point) crafts it into something that’s breathtaking to see.

The opening text gives us some backstory to the events that are to take place by informing us that years ago the kingdoms of Pei and Yang fought a war that was decided by a dual between the prized generals from each dynasty. General Yang (Hu Jun) of the Yang dynasty defeated commander Zi Yu (Deng Chao) of the Pei dynasty, and in the process the border city of Jing (the crown jewel of the Pei empire) was absorbed into the Yang’s borders. The Pei commander was seriously wounded in the fight, and a wound was inflicted on him that has never truly healed. 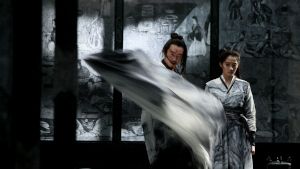 Fast forward to today, and King Pei Liang is intent on keeping the peace with the Yangs. However, Zi Yu has gone behind his back and offered a rematch of their duel from years ago, forever defining who would control the city of Jing. Furious, Pei Liang strips the commander of his rank and sends him back out as a pure commoner. However, this isn’t going to stop said “commander”, as it is really not him pulling the strings. You see, this is not the real Zi Yu. The real Zi Yu is hidden away in a secret part of the castle, and put up a slave named Jing as his body double. The wound from Yang’s saber has never properly healed sadly, and it has taken a turn for the worst over the last year, prematurely aging him and causing him to dip into mere madness. As such, he needs to pull the strings from behind the curtain in order to manipulate the two kindgoms into fighting a rematch so that he can get his revenge on General Yang.

Shadow is a multi layered film, with differing groups of people seemingly working for different ends. Zi Yu and Jing are both working to unseat Yang, while the King is desperately trying to keep the peace, even if that means losing face with his people and the opposition. Zi Yu’s wife (only known as Madam, and played by Sun Li) is having a crisis of faith. She’s not sure whether to follow her husband’s machinations to the end, as she is actually becoming enamored with Jing, who is her “acting” husband during the ordeal. All of this culminates with an epic battle between Pei and Yang, as well as General Yang and Zu Yi (well, actually Jing) as the two kingdoms put to rest their personal grudges, and the battle for supremacy over the city of Jing.

Even though it’s pretty complex with its varying characters and sub plots, Shadow is a surprisingly easy story to follow. The twists and turns are a mixture of predictable and surprising, and while Yimou never truly gets the mind altering “epic” that he’s so obviously trying for, the movie itself is a lot of fun. Yimou foregoes nonstop action for a slow burn political story, but I never once felt like it was too sluggish to watch, nor was it devoid of any real action. The fight scenes are awe inspiring in their intricacy, making fights into near dance sequences, the final 30 minutes is a bloody mess of death, battles and betrayals in true Chinese epic fashion. 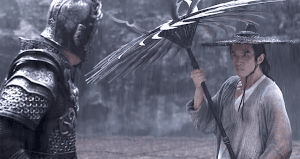 Shadow was shot using a mixture of Phantom Flex 4K cameras and the Red Weapon digital camera system in 8K, then transferred to a native 4K master for the home video release. The Blu-ray is absolutely stunning in it’s presentation, with a monochromatic color tone that is interspersed with splashes of faded colors (usually blood, or skin tones). It’s not a traditional black and white film, but the grading is so specific to blacks and grays and whites that it might as well be. The black levels are deep and inky, showing tons of shadow details while being so dark and “inky” that they almost absorb any remnant of light that touches them. Fine details are crisp and well defined, showing every cut, every bruise, and every bit of costumed wonderfulness that Yimou Zhang displays on screen. Well Go USA is usually pretty heavy on the banding, but this presentation only shows a minimal amount of banding in the darkness, and it’s not very noticeable unless you’re looking for it. 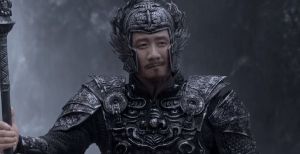 Shadow has a NEAR flawless Dolby Atmos track (one of the few, as Well Go USA has stuck mainly to DTS:X tracks for their next gen mixes) that is available on both the Blu-ray and the 4K UHD discs (there’s an English Dolby Digital 5.1 lossy track on the disc, but the Atmos is in the original Mandarin only). The track is nuanced and extremely agile, shifting from melodic Chinese Guqin (stringed harp like instrument) to heavy crashing of blades and the sharp rasp of footsteps on stone floors. The movie is a bit of a slow burn at times, but the action sequences are incredibly immersive, with blades flying by your head, slamming in the back of the room, and the score just permeates every second of the mix. Since the movie has perpetual rain going on the listener is immersed in the droplets falling from overhead (making use of the Atmos overheads) as well as all around the listening position in a light pitter patter. The bass is powerful and judiciously used throughout the movie, and while it hits hard and low, the LFE is never over aggressively mixed and blends seamlessly with the rest of the music, ambient noises and general feel of the political thriller. One thing that was pointed out to me, and that I noticed for myself on subsequent watches, was the overhead usage. The constant dropping of rain is about the only place said overheads are really utilized. I mean, I can hear the ambient rain drizzling down throughout, but discrete effects in the overhead plane are rather obviously missing. The battle for Jing City would have been a perfect place to utilize them with the fan blades being sent across the room, and while you can hear them in the side and rear surrounds as they whistle from front to back, they don't really engage overhead in any way. It's not a HUGE disappointment as the rest of the track is really incredible, but something to note if you were expecting heavy overhead usage.

Shadow is a striking film that is lovingly handled technically, as well as story wise. As much costume drama as period piece political action thriller, Shadow tries to fall along with the classics like Hero and House of Flying Daggers in scope and execution, only falling short JUUUUUST barely of that goal. While Yimous Zhang doesn’t always realize every one of his epic oriented goals, Shadow is a very solid movie in her arsenal of films and makes for a beautiful watch from a technical standpoint as well. The Blu-ray is a stunning film in it's technical departments, and while I naturally recommend the 4K disc over this Blu-ray either one is devoid of most extras besides your typical trailers and a making of set of features. Definitely worth checking out.