Highlights
SeymourAV, the consumer-direct channel of Seymour Screen Excellence, offers several different screen materials and mounting systems, which are highly configurable to build the ideal screen for each customer. They're specifically known for their high-performance acoustically transparent materials, which employ a woven construction, vs a perforated vinyl material. This allows the user to place the screen directly in front of their front speakers with minimal air gap, and has a minimal effect on the sound passing through the screen, making it easier to EQ your frequency response to make up for the screen.

The Proscenium line of screens offers motorized masking, or masking panels at a price point less than half of the price of the nearest competitor.

Attention to detail is evident from the moment you open the box. Every screen is made to order in the US, and shipping costs are included in the listed price.

Summary
Movies are released in multiple aspect ratios. Projection screens, unlike televisions, are more easily adapted for these different aspect ratios with masking panels. This allows users to bring a dark, light absorbing material directly adjacent to the image, effectively enhancing the perceived contrast of the image.

SeymourAV's Proscenium line of screens enters the marketplace at an unheard of price point, bringing luxury features to every DIY theater enthusiast. 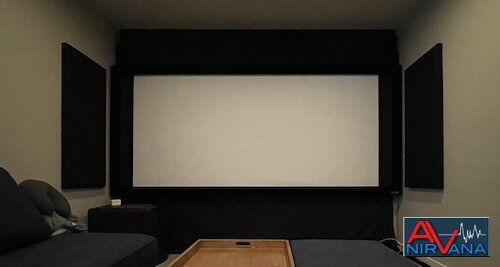 If you’ve been following my build thread on AV NIRVANA, you know that last year we moved across the country, fell in love with a house and bought it, even though the theater space was less than ideal. I brought much of my equipment with me from the previous house, but I left the screen behind. Between getting settled, then planning, setting up, wiring and building out the new theater space, I went about eight months without a theater, and I was going through some serious withdrawals. But I’m suffering no more, because we are now up and running.

I recently added the SeymourAV Proscenium Motorized Masking Screen to my theater setup. The CenterStage UF, acoustically transparent screen is 124.6" diagonal in its native 2.4:1 Cinemascope aspect ratio. Motorized masking panels travel in from the left and right to frame out a constant image height 16:9 aspect ratio area. The screen arrived in mid-April, and I assembled and installed the following day, with little problem. Masking system motors and materials are pre-installed and calibrated at the factory, so it's really just putting together a half-dozen pieces and adding the screen material. Assembly took just over an hour working by myself, and with a second set of hands, putting it on the wall took no time at all with the included Z-clips. I spent a little bit of time getting the projector's lens memory settings configured and making some basic adjustments to the image settings, and we were ready to rock and roll!

For a complete look at the details, the benefits, the installation, setup and performance of the Proscenium screen, I put together a video - check it out below!

Thank you so much!