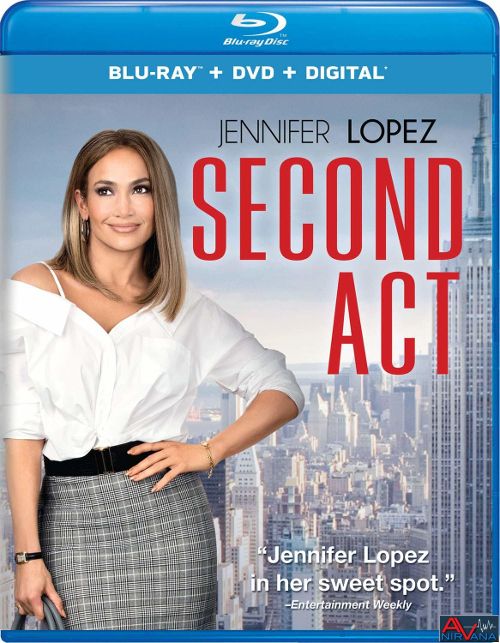 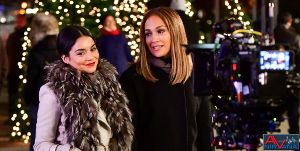 Movie
Second Act is an attempt at reworking one of life’s most classic tales. Coming from nothing and making something of yourself. It borrows and uses the tropes from so many other films to craft a film that is not going to pave any new paths in the film market, but also not going to be off putting to fans of the rom-com genre. I was initially going to write Second Off completely as another low budget rom com with the same tired old tropes, but I decided to pay a bit better attention due to the fact that it was directed by veteran rom-com director, Peter Segal (50 First Dates, Tommy Boy, The Longest Yard), and I”ve long since been a fan of his sort of comedy. The film is a bit hackneyed at points, and definitely uses traditional comedy tropes, but there’s a mid life crisis twist in the second half of the movie that rises above some of the more “blah” moments from the script and takes it to a higher plain that it should really be at as a result. It’s cute, fluffy, sweet, kind, and decidedly puff pastry entertainment at the end of the day.

Maya Vargas (Jennifer Lopez) is a successful self made woman who has unfortunately hit a glass ceiling in her career. Even though she has a great boyfriend Trey (Milo), a solid job as an assistant manager at a local big box store named Value Shop (the classic movie Walmart clone) and plenty of friends, there’s this wall that she can’t climb over into getting a manager’s position. It’s not due to her age, or her sex, but rather her limited education. Even though she’s basically doing the work of a manager, and came up with a BRILLIANT idea for the company, shes stuck where she’s at simply due to minimum education requirements. Thinking that she’s completely helpless, Maya gets a second chance when her best friend Joan’s (Leah Remini, who looks almost unrecognizable from her King of Queens days) son sends in an application for her to Franklin and Clark, the largest cosmetics manufacturer in New York.

Thinking she’s going in for a base interview, Maya comes to find out that Joan’s son Dilly (Dalton Harrod) has been a bit “creative” with her qualifications. Suddenly she’s a Harvard grad, met Obama, and traveled the world, and before she can deny the fact to her interviewer, Maya has the job as a consultant for Franklin and Clarke’s new cosmetic line. Sucked into the life, Maya soon starts to lose sight of her old life, and the more and more she gets into this new role, the harder it is to come clean about her fibs of omission. It gets even worse when she has a mid life crisis and finds the daughter she gave up for adoption over 20 years ago WORKING at Franklin and Clark, making her decision to be dishonest all the more nerve wracking.

Second Act does NOT blaze any trails. It is is simply feel good rom-com material that works within the traditional boundaries of the genre. It’s cute, funny, very predictable, and a veritable fantasy about life. I mean, we all know the fantasy of the genre, and Second Act follows that pattern to a key. Maya wants to better herself but can’t for some reason. She has to lie in order to become someone she’s not, everything falls apart near the end, but she’s more than capable enough to draw herself up from the ashes of defeat and rebuild her life. Happily ever after, the end. As I said, nothing new to the plot at all. However, there is a neat second act twist dealing with Maya finding her long lost daughter that elevates the plot a bit. This twist adds a heavier layer to the traditional fantasy and makes her decision to lie all the more relatable to the audience, even though they know she HAS to fall on her sword as per traditional movie rules. It’s not that we’re agreeing with her decision, but it gains a sort of empathy to Maya’s dilemma, as many parents would want to hang onto a long lost child as much as humanely possible, even if that meant bending their own morals at times.

Rated PG-13 for some crude sexual references, and language

Shot digitally (as is the norm for movies these days, even more so for lower budgeted films like this one) Second Act is bright and shiny, and pleasingly detailed across the board. The grading is very natural for the most part, with light shades of blue and gray for the Franklin and Clark office building, with more robust and ruddy colors for Maya’s home life and with her friends. Skin tones seem appropriate, and black levels inky enough to be satisfying. Fine details on J-lo’s constantly changing attire, and party environments is great, with the only thing being of any issue is a mildly soft look to the whole thing. Everything is very good, without going into the “great” category, but it works very well for the romantic comedy genre and there are no major issues to speak of.

As is the case with most films of this genre, Second Act’s 5.1 DTS-HD MA track is more than capable of delivering the goods, but naturally doesn’t stand out as anything truly special either. It handles the rather rudimentary audio mix competently enough, with a majority of the heavy lifting up front in the center channel. Dialog is crisp and locked firmly up front, while the surrounds and mains get moderate activity with the din of city traffic, or the musical accompaniment at a big wig party. LFE is usually just there to aid the music and for the occasional slamming door, otherwise it tends to be rather demure and settles into the background. The 5.1 mix isn’t a wild standout track, but it’s not designed to be that way, nor does the film’s sound design really ask anything staining either. It’s a simple drama/comedy track that does everything well, even if it’s not going to be the pretty girl out front.

• Connecting with Milo Ventimiglia – See how Jennifer Lopez and Milo Ventimiglia connected on and off screen in this behind-the-scenes piece.
• The Empowering Women of Second Act – Get an inside look at how the women of Second Act empowered and supported each other.
• Friendship On and Off Screen – See how real life best friends Jennifer Lopez and Leah Remini had fun on set and how their real chemistry played on screen.
• Working with the Ones You Love – Get a behind-the-scenes look at how the whole cast had fun while filming Second Act.

​
Second Act is cotton candy film making at it’s best. It’s simple, predictable, enjoyable on a surface level, and competent enough with the writing and direction. There’s a few hackneyed moments with the predictability (the worst part of the watching experience is being able to literally map out every beat of the film ahead of time), but it’s a fun little fantasy that’s pretty much harmless junk food cinema. J-Lo is as adorably cute as ever (does the woman ever age?), and the direction by Peter Segal light and airy. The Blu-ray itself is given very nice audio/video specs, but is sadly lacking in the extras department. As such, I give the film a single thumbs up as a fun one time watch for those who like empowering rom-coms.

Thanks for the review. I am sure my wife will enjoy it. Will catch it once on amazon prime/netflix.