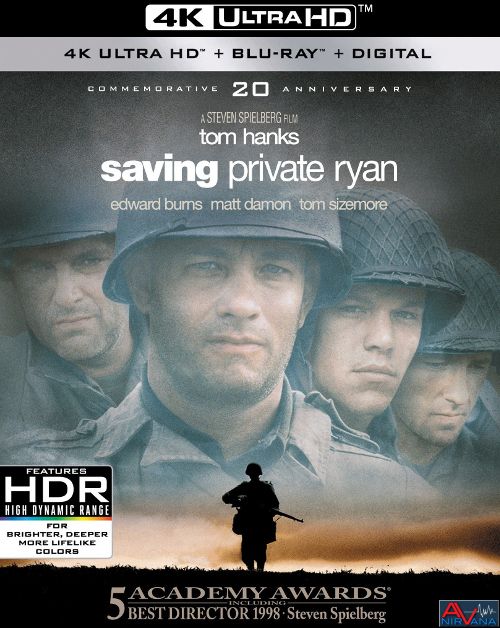 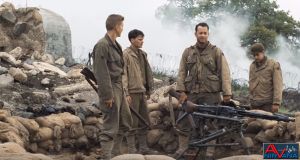 Movie
There are few movies as highly regarded as Saving Private Ryan. Spielberg was a living legend for multiple decades, and to this days can still put out some amazing films, but movies like Saving Private Ryan and Schindler’s List are movies that are EXPERIENCED, rather than just watched. As movies they are amazing, but as messages, they are simply timeless. 20 years after it was initially released in theaters, Saving Private Ryan comes back to home video for an amazing collector’s edition that maintains the solid extras of the previous editions, as well as a completely new encode for the video and an upgrade to Dolby Atmos for the audio.

Following the incredibly hard fought battle of Normandy beach, Captain John Miller (Tom Hanks) is given a special assignment. Find a private James Francis Ryan (Matt Damon) and return him home, as Ryan’s three brothers have all been killed in action (back then, if you were the last surviving member of your household you were exempt from active duty so that your family line would not be wiped out completely). Ryan, who was air dropped into France the night before the invasion, is now lost behind enemy lines and it is up to Captain Miller and his squad of men to track the private down and bring him home safely.

What starts out as a simple mission becomes just another brutal day in the hell that is war, as Miller, Sgt Horvath (Tom Sizemore), Corporal Upham (Jeremy Davies), team medic Wade (Geovanni Ribisi), Private Reiben (Ed Burns), Caparzo (Vin Diesel in one of his first roles), Jackson (Barry Pepper) and the rest learn to discover that there is meaning in this living nightmare. Days go by, towns go by and men die, but still no sign of Private Ryan. The men begin to balk at the notion that this mission is even worthwhile, but still Captain Miller pushes on. Even though I can not hope to explain all of the intricacies that happen in the 169 minute film, I can say this. The squad’s mission is not to save Private Ryan. Their mission becomes an effort to save themselves the horrors of war and find meaning in their suffering and sacrifice. 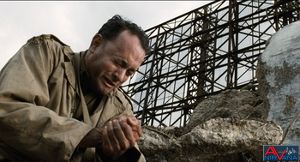 Saving Private Ryan is probably one of the most visceral and potent war movies every created, in my opinion. Spielberg’s passion for World War II, and the men who served, is widely known, but you can actually FEEL his passion and intensity here. Every second of the movie is captivating, and every scene has purpose and meaning. Starting from the hell that is Normandy beach to the mire that is the French countryside, all of it is meant to convey a point, a feeling, or just to evoke a simple thought from the viewer. The movie is un apologetically brutal. Brutal to the point that you actually kind of have to squeamishly look away (the knife scene really hits close to home), but it is never meant to be titillating or to evoke excitement. There are no slow motion shots of Tom Hanks gunning down Nazi soldiers, nor is there long kill streaks with uplifting music. Instead the violence is there because that is what war is. Brutal, depressing, soul crushing violence that sapped so many men and women of their will to live after they came home.

While the violence is brutally effective, it only exists to be as accurate as possible. The real themes and messages are what happen to the men DURING their trudging through the mud and muck. Each man learns something about himself along the way, and even learns more about his brothers in arms. Tom Hanks excelled as the soft spoken English teacher turned Captain, but there are really so many good performances it’s hard to really name them all. People like Paul Giamatti, Vin Diesel (in his small role), Adam Goldberg, Max Martini, and even Dennis Farina. To this day I’m still a little hurt and frustrated that Saving Private Ryan lost out best picture to Shakespeare in Love (I’ll probably hold that grudge till I die), but I will ALWAYS find the grisly war movie one of Spielberg’s best films ever. I can’t watch the movie all the time (similar to Schindler’s List), but when I do watch it, it is a true EXPERIENCE more than a watch. 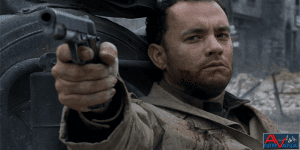 Wow, just wow. Now THIS is what I love to see when I watch a catalog UHD title! Saving Private Ryan looked fantastic on Blu-ray, and I have touted the 2 disc Blu-ray disc as one of my big demo movies back in the hey day of 1080p. However, this 2160p UHD disc completely surpasses it without even breaking a sweat. Saving Private Ryan has always been a gritty film, with some heavy bouts of film grain and a raw look around the edges. The 4K UHD disc replicates Spielberg’s rough and gritty intent easily, and crafted a disc that handles the complexity of such grittiness with apparent ease. The textures looking absolutely stunning, with helmets and faces showing every little bit of detail imaginable. Watch the opening beach scene with all of the soldiers huddled down in the rough sand. You can see individual grains of sand falling off of their shoes, as well as the peeling paint from helmets. Later on the in the movie you see someone trying to get a cup of coffee from what seems to be an espresso type machine, and the glint of the cup actually shows reflections and shifting light patterns across it.

The use of HDR and Dolby Vision here is really the crowning achievement though. I compared the HDR 10 vs. the 12 bit Dolby Vision on a 65 inch Sony 940e and I must say, the Dolby Vision actually slightly edges out the HDR by a little bit. On both the use of said color technologies creates a much brighter and more vibrant image, with the flat greens and browns of the movie contrasting with maroon blood, or shiny green cups off to the side of the table. This is a light departure from how the Blu-ray and DVD looked, but Spielberg oversaw this presentation to make sure the added brightness and color depth didn't detract from the original intent of the film. The blacks are sickeningly deep and inky, with no signs of crush, banding, haloing, or aliasing anywhere in the image. The overall picture is a huge upgrade over the Blu-ray, and one of those films that I will continue to use in my “demo rotation” as this is a stunning work of 4K achievement.

Once again, a solid upgrade over the previous incarnation is present in this 4K UHD disc. The Blu-ray edition came with a really impressive 5.1 DTS-HD MA track, and that seemed to really max out what the disc was capable of. However, the new Dolby Atmos track from Paramount adds some new depth and encompassing effects to the virile war movie. The opening scene as the men dive onto the beach is more lush, more full, and filled with some overhead use that really sets it apart from it’s 5.1 counterpart. The beach scene shows off some incredible use of the surrounds, with waves crashing all around the listening position, and the sound of gun shots having a unique tone and texture to them. Later on in the battle of Ramelle, the track changes even more, encompassing the listener in a tight enclosure that is more claustrophobic and intense. The falling of debris and the rattling of tanks come from different directions, and really add to the intense feeling of the track. Bullets sound more powerful, and the low end is just devastating. The real benefit to the object oriented track comes from the extra room that comes from the extra channels. The mid range sounds cleaner and clearer, and the harsh elements of loud explosions are more natural. Something that seems come from the lack of compression, and the wider dynamic range that this Atmos mix allows for. As I said, the track just FEELS wider and more nuanced than the 5.1 track, and really is a picture perfect audio mix.

Saving Private Ryan is truly a classic film that has stood the test of time. 20 years after its initial release, it can still cause this jaded critic to break down in tears and just appreciate the true sacrifice these men made during the most horrible world war we had ever known. Spielberg matches his peak of Schindler’s List with this one, and it’s a very difficult decision to choose one of the two for a favorite Spielberg film. The Blu-ray was one of my most treasured discs, but this 4K UHD easily outclasses in in all technical manners. The extras are the same extras on the 2 disc Blu-ray edition (and are housed ON the 2 discs, as the 4K UHD disc is bare), and this leaves me putting up 2 thumbs in the air recommending you go out and double dip without any sense of regret. Highly Recommended as a must buy.

Thanks for the review. This is a great movie to have.

Yep, I’ve had this on order for a few weeks. IMO this is Spielberg’s crown jewel and it’s nice to see it was given the respect it deserves. It’s been awhile since I’ve seen it but I’ll be hunkering down with the added bells and whistles of 4K and Atmos delight. Thanks for the review!

My only complaint about this film is:

Why on earth didn't he go cinemascope when he shot this epic flick?

NEXT UP: DIE HARD!

Mike, did the bass get a serious boost in this release, btw?

My only complaint about this film is:

Why on earth didn't he go cinemascope when he shot this epic flick?

Die Hard is confirmed to be in my mailbox next week.

Todd Anderson said:
Mike, did the bass get a serious boost in this release, btw?
Click to expand...

Not really. I find it more accurate, and cleaner with the bigger headspace from the encoding, but the low end feels really similar.

I'm looking forward to giving this a spin. Hopefully next week ;-)

by the way. Paramount has Gladiator and Braveheart coming out on 4K next week as well. I got my copies in and have skimmed both out of curiosity. Lets put it this way. Your wallet is gonna hate me (especially with Braveheart)

Michael... my kids need to eat! You need to apply the breaks, NOW!

Todd Anderson said:
Michael... my kids need to eat! You need to apply the breaks, NOW!
Click to expand...