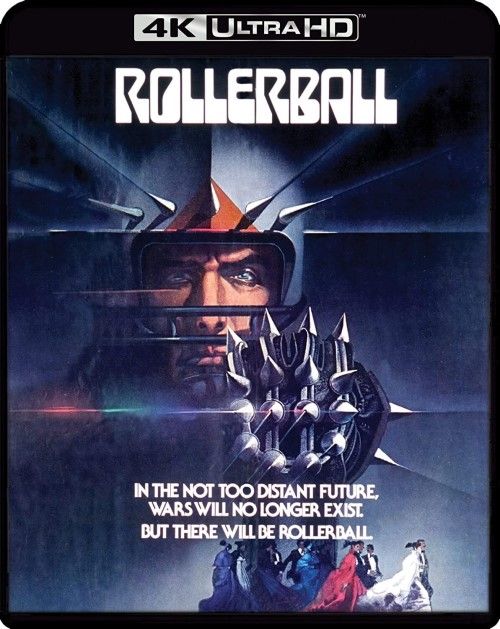 Movie
The concept of freedom and individuality in a dystopian future has long since been a staple of cinema. We have films like Death Race 2000, Demolition Man, Soylent Green, and many others delving deep into the desire for the strong to oppress the weak by destroying their individuality. It’s a staple simply due to the fact that humanity tends to lean that direction many ways, and Rollerball is more poignant than most these days with how scarily certain aspects of the film mirrors modern day life. In Rollerball nations no longer exist. Wars are gone, and humanity is at relative peace. However, corporations rule everything, taking the place of nations and elected officials, using the hyper violent sport of Rollerball to act as the opiate that keeps the masses subservient. While we may not be in that exact position, when looked at closely, some parallels are disturbingly similar. With tech billionaires owning VAST swathes of the propaganda…..errr...social media sources, or Disney owning almost 50% of the major film studios, others owning gigantic portions of all our retail purchasing locations, it starts to raise the hairs on the back of you neck. While the 1975 film is not some wildly under rated classic, it’s a fascinating watch to see that no matter how much you try to crush the human spirit, it’s flame is never TRULY extinguished.


As I said, the setup for the film is that sometime in the past (Rollerball is set in the “future” of 2018) humanity pretty much nearly wiped itself out, ending with the entire world’s political government’s falling. Now, corporations run the entire world. Men in suits behind giant mahogany desks facelessly push papers that control the entire populace. They own all of the information outlets, going so far as to basically bring together all books out of the hands of the masses, and transcribe them into computers which “simplify” the knowledge and give an edited version to the people. You know, just what they “need” to hear, nothing more. And past that human violence is curbed ala the Roman days, but allowing them the sport of Rollerball, a giant and brutal game that keeps the masses focused on that and not the intellectual and spiritual prison that they’re in. 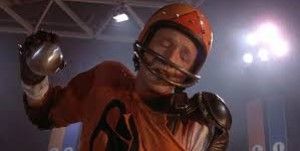 Jonathan E. (James Caan) is one of the best the game has ever seen. He’s played over a decade, but has been told by the head of the Energy Corporation that he’s being forced to step down. It’s not a big deal for most. The Rollerball players are given lush accommodations, beautiful women to be their companions, and a retirement that will make sure they’re never unhappy. However, Jonathan doesn’t want out. Instead of playing nice with his boss (played by the ever incredible John Houseman), he decides to buck his corporate overlords and keep playing, no matter what the cost, no matter what the decisions others have made for him.

Rollerball is a film that basically gets 2/3rds to 3/4ths of the way to the true meat of the issue, but never truly GETS there, if you know what I mean. It plays with concepts of individualism and faceless corporate oppression, but doesn’t really bring the ideas to fully fruition. We know Rollerball is meant to be an opiate for the masses right off the bat, but the big mystery in the film is finding out WHY Jonathan is being sidelined in his own game. However, the film simply states the ended goal 3/4ths of the way through and doesn’t really expound on it. Simply put, Rollerball is not just a way to curb the violent appetites of the masses ala Roman Gladiators. It’s a game that has been explicitly designed so that it’s only winnable as a team. Jonathan is just too good to good at the game and starting to carry it, making the people notice the individual instead of a group. Something that the corporate overlords do NOT want. His whole cancellation and attempt to oust him is just because they don’t want an individual hero arising from the sport, as the mass psychosis of the game is simply to spread propaganda about lack of individualism. The final match is sort of the culmination of the movie, accentuating Jonathan’s drive to be the best, and acts as a sort of “Telemachus and the Gladiators” moment for the people. HOWEVER, it’s never really fully fleshed out on screen. You can see that director Jewison was aiming at a social commentary of the effect of violence and lack of individual autonomy, but you almost have to extrapolate a good chunk of it yourself rather than have the narrative expound on it. It’s one of the reasons why I have always thought of Rollerball as the movie that “could have been”. It was bordering on greatness, but due to some strange directorial choices it just never was.

According to the press release, the film got a new restoration done in 2022 and re color graded with Dolby Vision and HDR for this particular UHD release using an existing 4K scan that MGM provided (not sure how old the scan is, and whether it was the same scan used for the TT and Scorpion Releasing releases, but I think it is) The results are generally very very nice. The movie is very filmic, with a nice 1970s heavy layer of grain over the entire image that isn’t marred by nasty digital tampering (*grumble, whine, Planes, Trains and Automobiles). There’s some spikes in grain and lack of clarity in some optical effect shots (such as when we’re looking at the Rollerball rink from the stadium, or when we’re watching the drunk party goers running across the lawn to shoot up the trees), but overall detail levels and general clarity is VERY nice. Jewison was a huge fan of A Clockwork Orange, and you can see that in how he uses visual close ups and cutting in to faces while using classical music, so it has a very nostalgic and familiar texture to the movie. Colors are really good, with bright lipstick highlights standing out, and a sense of 1970s orange that permeates the entire picture. I don’t have my Twilight Times disc on me to review (still unpacking stuff from moving last year...the never ending unpacking), but it seems to be a bit brighter, a bit richer, and definitely way sharper with the new color grading and Dolby Vision application. .Very impressive.

Supposedly the theatrical showing of Rollerball was using 4 track or 6 track Dolby Digital mixes, but the original home video release of the film always had a Mono track (which the Twilight Time disc carries), but ever since the Twilight Times release there has also been a really nice 5.1 DTS-HD MA mix that has pretty much been used and re-used by all the other studios (at least I can’t tell any major differences between the studio releases if they ARE using proprietary mixes). It’s a solid track, with a lot of the ambiance and activity being during the rollerball matches. Voices are strong and clean, although occasionally hollow, surrounds get some good use during the matches. A few times vocals move away from the boom mics and get a bit soft, but those are brief. The one thing that really stands out to me is how much the track utilizes dialog panning in the mains. Most modern films strictly keep dialog in the center channel, while some older movies (especially stereo ones) would utilize dialog panning that bleeds into the left and right mains when someone moves away from the center point on screen. Rollerball uses that VERY heavily, and even when someone is in center there is mild use of the mains to accentuate the dialog. Something I’ve always noticed but after comparing it to a much more modern movie literally an hour before the viewing, it really stood out.

Rollerball is a fascinating film with a fascinating release history. Years ago it was considered not popular enough for mass releasing, being handed over to the now defunct Twilight Time studio to be limited to 3,000 copy runs, only for Scorpion Releasing to get ahold of the Blu-ray rights last year. Finally Shout Factory has got their mits on the film and given it a 4K UHD release, but foregone a Blu-ray release (luckily I kept my Twilight Time Blu-ray to make my own combo pack). It’s an interesting flick with a great performance by James Caan. It’s one of those cult movies that is not so amazing that it’s a classic, but still a good watch. The new 4K UHD disc looks and sounds very good, with most of the extras from the overseas Arrow release as well. Definitely recommended.