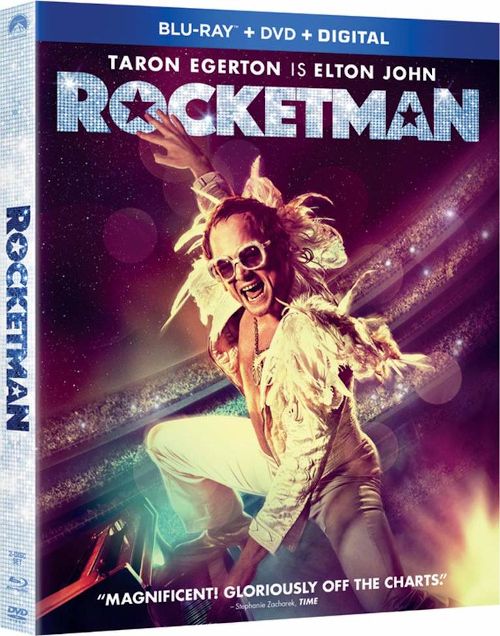 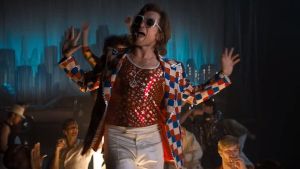 Movie
Music biopics have been big the last couple of years, but few have been as hotly anticipated as Bohemian Rhapsody and Rocketman, both chronically the lives (or at least partial lives) of two of the biggest icons in Rock and Roll history. I missed out seeing Rocketman theatrically (much to my chagrin), so I was beyond ecstatic to check out the musical/rock opera about one of the most flamboyant rock stars the world has ever seen. I didn’t grow up on Elton John when I was a kid like I did with Freddie Mercury and Queen, but I acquired a taste for the man’s music when I was in college and going to film and music appreciation classes, so I don’t have that sweet nostalgia or remembering an icon from my young young days like I did with Queen. BUUUT that doesn’t stop me from toe tapping along whenever the king (or queen really) of Rock comes on my spotify playlist.

I wanted to like, nay, LOVE Rocketman, but the strange sort of musical/biopic doesn’t seem to catch hold of one like the before mentioned Bohemian Rhapsody did earlier this year. It’s a solid entry, and has some fun, but there are some miscasting issues and if you look at objectively the story is fueled directly by a visceral and energetic performance by Taron Edgerton. The film starts out at a crisis for Elton John (Taron Edgerton). He’s in the height of his career and he walks off stage to go visit an AA meeting for his copious substance abuse problems and get ahold of his life once more. His AA discussion acts as the framework for the movie, allowing him to regale the group with his life up until then, starting with the lack of live coming from mother (played by Bryce Dallas Howard) and father (played by veteran actor Steve Mackintosh), and the innate ability to tickle the ivories that got him into the royal music academy.

From there young Elton (who was originally born Reggie Dwight) is only going up, as he hooks up with lifelong musical collaborator Bernie Taupin (Jamie Bell), and the the two spiral upwards to the heights of rock and roll. The only thing is, when you get to those heights the only way to go is down, and Elton John’s life start going down bit time. He’s always struggled with being gay, but the big stumbling block in his life has been that desperation to be loved by someone. A starvation that was started by his own parents lack of caring, and causes the singer to look for it everywhere. He thinks he has it with musical producer John Reid (Richard Madden) only to realize that John is incapable of love, and all the while he’s fueling his pain with drugs, sex, music and everything he can put in his body in a futile effort to feel something.

For better or for worse, Rocketman sticks to its stylistic convictions and acts as a strange sort of hybrid between biopic, fantasy and musical. The music flows throughout the film in copious quantities, and it’s not just there to listen in the various live performances that Elton gives. We have Taron singing portions of the story, singing on stage, and certain portions have the music just lilting along in the background. Taron himself is the mainstay of the film, completely engrossing himself in the character of the pained singer, so much so that it’s hard to tell the two apart at times. The only times I say Taron Edgerton instead of Elton john was during some of the songs, as Taron’s musical skill (however impressive) is impossible to live up to the golden pipes of the real man himself.

Outside of Taron though, the film is a bit middling. Bryce Dallas Howard is terribly miscast as his mother, and Jamie Bell is about the only other standout roll beside Taron. The film itself gets mired down in the fantasy aspect of the movie, making itself just a little too far out of reach emotionally, and by the time the film wraps up we feel like the 2 hour film could have used another 20-30 minutes to delve more into his life. HOWEVER, I will say this. The finale 10-12 minutes of the movie is absolutely magical, bringing out the best parts of the script into one poignant and tear jerking finale that actually WORKS for the character. While I would have liked to have seen a more cohesive 2nd act, that finale 12 minutes is almost worth the price of admission alone.

Rated R for language throughout, some drug use and sexual content

Shot on Arri Alexa cameras at 3.4k and transferred to a 2K master for home video, the 2.39:1 AVC encoded Blu-ray from Paramount Pictures looks stunning in 1080p. The movie has a distinctly dueling look to itself, with some of the more freewheeling fantasy scenarios looking all bright and colorful, while the “real life” sequences are more tame with hints of brown, teal and gold to keep it looking like the 70s and 80s for the film. Clarity is razor sharp throughout, with only some of the bar scenes and the duller toned real life sequences not looking as razor sharp as the rest of it. Black levels are deep and inky, and overall Rocketman looks fantastic on Blu-ray as the camera darts around the stage in a seemingly frenetic but precise manner.

Now, here comes the highlight of the entire package, the Dolby Atmos track. Much like Bohemian Rhapsody, Rocketman sports a perfect audio track that is the life of the party. The rich vocals are resplendent in every situation, whether that be bar or stadium, and the dialog is beyond reproach. The music of Elton John flows effortlessly among all channels, and the more “fantasy” oriented portions of the movie actually have the crowd cheering from all directions so it really feels like you’re in the heart of the musical. Overheads have some nice panning and discrete effects, but this isn’t one of those mixes that is reliant on tons of overhead noise. LFE is light and airy, adding weight when necessary, but also just simply filling out some shots with some of the most nuanced and tightly constructed low end sounds I’ve heard in a while.

• Extended Musical Numbers:
--Introduction by Dexter Fletcher
--The **** Is Back
--Saturday Night's Alright (For Fighting)
--Breaking Down the Walls of Heartache
--Honky Cat
• Deleted and Extended Scenes:
--Introduction by Dexter Fletcher
--I Love Rock And Roll
--You've Got to Kill the Person You Were Born To Be
--Arabella
--Elton in the Gas Oven
--Stylish Boots
--You're Not the First Closet Queer with a Mummy Complex
--The Blood Test
--The Heart Attack
--The Launderette
--Do You Want Anything?
• It's Going to Be a Wild Ride: Creative Vision
• Becoming Elton John: Taron's Transformation
• Larger Than Life: Production Design & Costuming
• Full Tilt: Staging the Musical Numbers
• Music Reimagined: The Studio Sessions - Behind the scenes in the recording studio with Taron & Elton
• ROCKETMAN Lyric Companion: Sing-Along with Select Songs (English only):
--The **** Is Back
--I Want Love
--Saturday Night's Alright (For Fighting)
--Your Song
--Crocodile Rock
--Tiny Dancer
--Honky Cat
--Rocket Man
--Bennie and the Jets
--Don't Let the Sun Go Down on Me
--Sorry Seems to Be the Hardest Word
--Goodbye Yellow Brick Road
--I'm Still Standing
• ROCKETMAN Jukebox: Jump Straight to the Music

Looking back at Rocketman I have to wonder how many fans actually look at the personal life of the singers that they idolize? I know for sure that I didn’t even know that Elton John was 28 years sober this year, nor that he was a raving maniac in his 20s and early 30s. It just never occurs to us normal folks who just listen along to the music and get caught up in the absolute magic they can make with voices and instruments. Elton John has inspired generations of music fans with his flamboyant and iconic variations of Rock music, and watching films like these makes me realize the burden’s these men (and women) shoulder in order to bring us said magic. While I would have liked a more solid film overall, Rocketman is fueled by an absolutely electric performance by Taron Edgerton, and is a fascinating watch for those of us who love the crazy old singer’s music. The Blu-ray disc is a treat, with great video, stunning audio and a decent array of extras to enjoy. Solid Watch is my personal recommendation.

Thanks for the review. Will catch this one.

I too will watch this one. Thanks for the review.

I am not able to put my finger on why this movie did not sore for me, it was good, perhaps very good but never did reach the heights I had hoped for. I agree completely with your review

We really enjoyed this. Didn't realize it was a musical, which isn't usually my cup of tea, but Taron Edgerton was fantastic, and impressive that he did all his own vocals, too. Really liked it.