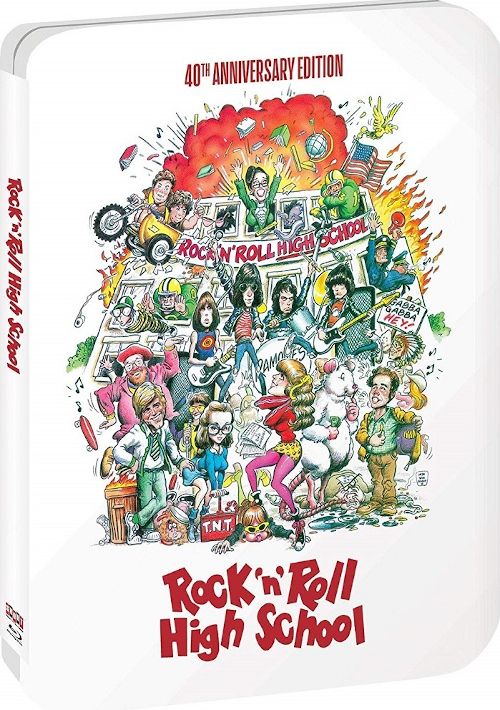 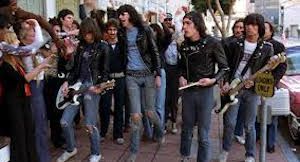 Movie
Shout Factory is once again bringing out a special edition for a previously released film, but this time it’s one of their own releases as well. 2010 had Shout Factory releasing a mediocre edition of 1979’s punk rock musical Rock ‘N’ Roll High School with great special features but a middling video encode that was taken from an aging master. Now, almost 10 years later, they’ve gone back to the original negative for a 4K scan for a massively upgraded picture, a slight boost on the audio, and even some new extras to fill out the already fantastic array that the 2010 sported (including a nifty steelbook packaging for collectors).

Ah yeas, the late 1970s, when comedies were all about over sexed teenagers, the evils of rock ‘n’ roll music, and a rebellious attitude towards authority. 1979’s Rock ‘N’ Roll High School decided to tackle the age old rebellion comedy with an influx of punk rock, even including the band who started the entire genre into the main cast. It’s raw, goofy, fairly light on plot, but has become a cult classic for many fans of the Ramones and teen comedies in general.

At Vince Lombardi High, winning is better than losing, and the kids are about to run full tilt into the teachers with rabid glee. School rebel Riff Randell (horror queen, P.J. Soles) is a rebel with a cause, and her cause is The Ramones. She lives her life for punk rock and the desire to maybe, just maybe, get Joey Ramone to look at her and use one of her songs. However, a new principal comes to town in the form of Evelyn Togar (Mary Woronov), and Miss Togar is not going to stand for the ills and evils that is rock music in her school! When Riff and her best friend Kate Rambeau (Dey Young) get tickets for all the students to go to the upcoming Ramones concert it’s all out war, with Miss Togar trying her best to squash their childhood dreams, while Riff and Kate just wanna party.

There’s some mild sub plots with a dorky football player named Tom Roberts (Vincent Van Patten) trying to get into Riff’s pants (only for Kate to have the hots for Tom), but this is really just a 95 minute commercial for The Ramones. The band members participated in the movie for about 30% of the time, and even spent the last act giving a full on concert for the teens, with quite a few songs actually thrown in. Even when they’re not on stage as themselves Riff is fantasizing about Joey, their songs infuse every musical note of the score, and the subject matter is all about going to their concert. I mean, using a movie to promote a band isn’t anything big, but it’s pretty obvious early on that the entire premise of the movie was to act as a cross promotion to the legendary punk rock band’s peak in their career. The story takes second place, and when it is IS put in the forefront, it comes across like a mix between 1970s National Lampoon films, and Wet, Hot, American Summer.

There’s some degree of filmic structure to the venture, but the movie plays out as a stream of concsiousness experiment with 90% of the non Ramones portions being Tom trying to get in Riff’s pants, and Kate trying to get Tom to look at her, or Principal Togar trying to burn the “evil” rock ‘n’ roll music before the rebellious teens get any more wise ideas. The movie is one one of those love it or “meh” it type of movies that has garnered a very ardent cult following over the last 40 years. It tries to take the Rebel Without a Cause teen rebellion of James Deen and transform it to a late 70s punk rock comedy, and I happen to be one of the people who “meh” the film. The loose structure of the plot, and the obviously blatant Ramones promoting kept it from really being that great in my eyes, but I know that my opinion on that is NOT shared by a lot of cult comedy fans. It’s a strange film, but one that has stuck a chord with many for sure. 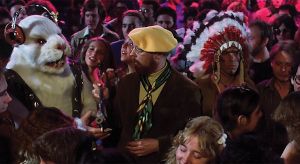 Shout Factory re-releases the 40 year old movie with a brand new master that is boasted as being struck from the original negative and done in 4K. The results are very apparent, as the new 1.85:1 framed encode (over the 1.78:1 open matte version from 2010) is head and shoulders better than what came before. Print damage, source anomalies, and other various issues form the low budget film are now just about gone (there’s a few speckles and bits of dirt and debris that come and go, but nothing major), and the warm colors from the grungy looking come through with sparkle and pop. Blacks are appropriately deep and the clarity is about as sharp as it could possibly be in my opinion. This is the best the movie has ever looked, and short of an upgrade to 4K UHD, I don’t see it looking any better either. 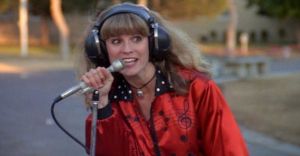 Here comes the one point where I have to say “I know it’s not great, but there’s a reason” for the lackluster audio quality that’s been found on both releases of Rock ‘N’ Roll High School. If you listen to the commentaries Director Allan Arkush admits that the equipment used to record the film’s audio was not the best, and the source material really never sounded good even back in 1979. There’s some hissing and crackling in the background, and the thinness of the mix is very obvious. Loud vocals and signing tend to distort a bit in the higher decibel levels, but still remain intelligible. The music is mostly well done, though there’s some moments where it lacks the punch it really should have had, even for a 2.0 track. The reality of the situation is, the movie has NEVER sounded great, and the audio mix seems to fall in line with the quality of the audio master’s condition from what we’ve been told. It may not be great, but this is not a movie that’s going to benefit from someone else tackling the sound issue. 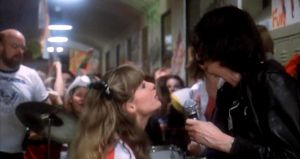 Rock ‘N’ Roll High School is a fun movie, but a fracture cult classic for sure. I’m not overly wild about it, but I do recognize the cult status of the film as well as really appreciate hearing that much of The Ramones in one movie (huge Ramones fan here). Shout Factory really spruced this edition up as well too. Fans of the original 2010 release will be pleased to hear that they have really upgraded the video with the new 4K transfer, and the extras are even more robust. The added cherry on top is that this is a limited edition steelbook as well, and both the inside and outside are incredibly well done. I may not like it as much as others, but this packaged is by far the most complete and filled with the best technical specs that has come to the 40 year old film. A must buy for fans.

Recommendation: Must Buy for Fans