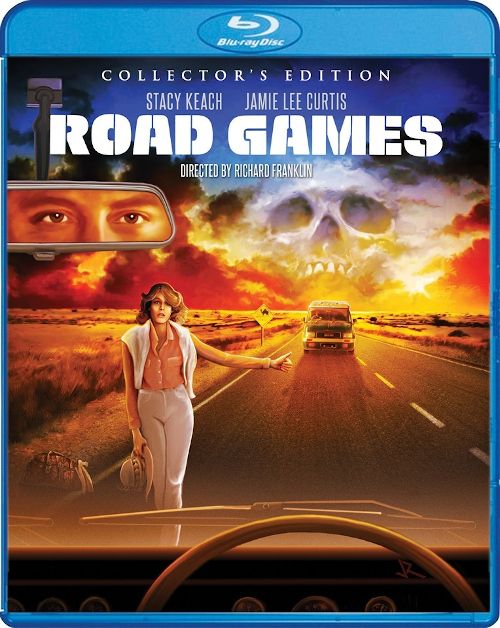 Movie
Richard Franklin’s Road Games is a singularly interesting anomaly in the world of 1980s thrillers. Right at the end of the 1970s noir genre, it straddles the burgeoning horror movies of the 1980s and it’s elder roots, being genuinely trippy and creepy at times, while simultaneously being rather Hitchcockian as well. The Australian production feels like a blend between an old family western, a noir thriller from the 70s, and a comedy at times. While the cover slathers Jamie Lee Curtis’s face on the cover (and is the draw of the movie for many, as they jumped on her popularity after Halloween), but this is really a Stacy Keach movie from beginning to end as she is just a side character (albeit an important one). The movie is weird, yet strangely entertaining as it navigates the currents jumping from trippy 70s thriller, to a few wry jokes and back up to creepy horror once again.

Stacy Keach is Pat Quid, an independent truck driver who is hauling a load of frozen pork across Australia to Perth during a nationwide meat strike. Exhausted from hauling for days, the veteran truckie stops off in front of a cheap sleazy motel where he can take a night’s sleep and get back on the road in the morning. Noticing a green van pick up a hitchhiker and pull into the hotel for the night, Pat immediately puts it out of his mind. However the next morning he notices the driver of the green van (Grant Page) looking out at him from a window, and his dingo Bosley nosing at some fresh trash bags across the street. Even though he feels something is off, Pat minds his own business and gets back on the road.

However, something is DEFINITELY not right. The radio announces that several murders have been found committed in the area, with the bodies chopped into bits and found at differing locations around the area. Getting a bit suspicious of what he saw, Pat’s flights of fancy seem to be confirmed when the same green van is seen on the side of the road with the driver digging a hole. Picking up a young hitchhiker, whom he nicknames “hitch” (Jamie Lee Curtis), Pat and Hitch make it a game to figure out if this guy really is a serial killer or not. But when Hitch gets kidnapped by the mysterious driver of the green van it’s no game anymore. Now it’s a race against time for the sleep deprived trucker to find this guy and hopefully save Hitch before it’s too late.

Director Richard Franklin was actually a student of Alfred Hitchcock, which actually explains a LOT about how this film plays out. Road Games plays out exactly like a Hitchcock thriller would, and is Franklin’s love letter to the genre, more content to pay homage to his mentor than he was worried about making a traditional 80s horror movie. Though Jamie Lee Curtis was the official draw for the film since she was the “queen of scream” at this point in time, this is really all about Stacy Keach. Things get truly Hitchcockian in nature in the first two acts, with the audience having several moments where they truly wonder if the guy is going man. But the third act kind of plays things a bit safe. The ending is a bit formulaic, and while it ends with a fairly spectacular chase scene (for the times), it just comes off as a bit trite after all of the noir styled trippiness of the first act or two.

The biggest boon to the movie is Keach himself. Stacy makes a fantastic protagonist, as he seems off his rocker one moment, completely lucid the next, and strangely exciting to watch. I do wish Jamie Lee Curtis’ Hitch had been in more of the movie, as the two’s chemistry is certainly undeniable. However, Keach is the driving force of the film and makes this thing a near one man show most of the time. It’s a good little thriller that just sadly suffers from a case of a formulaic ending after an incredible buildup.

Scream Factory hasn’t exactly mentioned anywhere in their press releases what type of scan this was taken from (old, new, 4K, 2K), but I would ASSUME that it is taken from the 2016 Umbrella release which was given a new 4K remaster for that release. Looking at the screenshots of Umbrella release and watching this one in motion I wouldn’t be surprised, as the film looks excellent compared to the ancient DVD release. It’s very filmic, with a nice layer of grain that doesn’t swarm or get in the way, but adds texture to the picture. Colors are warm and burnished, rife with earth tones and splashes of yellowed greens and reds depending on the situation. Sometimes things look a little paler than normal, but skin tones are accurate enough (pushed more towards the ruddy side of the spectrum), and fine detailing looking impressive. There’s some print damage still on the release, with a few bits of debris and some fain lines and flickers at the edge of the screen to be scene, but otherwise this is actually a really impressive looking encode.

The back of the packaging says that there is a 5.1 DTS-HD MA Mono track and a Mono DTS-HD MA track on the disc, but after checking the disc it looks like there’s only a Mono track actually there (which actually makes sense as the old Anchor Bay DVD only had a Mono track as well, most likely a packaging error) and it sounds reasonably good for it’s age. The mix was always a bit tinny and hollow on DVD, and it’s more of the same here. The dialog sounds a bit distanced and harsh, but it’s still clear and understandable at all times. The score and the rumble of Pat’s truck adds most of the weight to the film, and creates a moderately active front sound stage for the 2.0 Mono track. It’s nothing fancy, but it gets the job done without much more than the harshness to really bring it down.

Road Games is a singularly odd thriller from the 80s. So many times you think of gore, nudity, and heavy R ratings to the 80s thrillers and horror films, but Road Games plays out like a strange mix of a family western, a horror movie, and a light hearted comedy. The tone is all over the place, yet somehow director Richard Franklin makes it all work together at the end. Scream Factory has loaded the disc down with legacy and new extras, as well as crafting a double sided insert artwork that includes the new artwork AND the original cover art (which is might bit creepier I might add) on the reverse side. Audio is ok, but video is more than good, and along with the extras makes for a very worthwhile package for it’s first domestic release on Blu-ray. Definitely a fun watch.

Wow, I am glad you reviewed this one. I still have the VHS copy at home lol. This makes me want to watch it again. Thanks for the review!

Thanks for the review. Never saw this nor heard of it so will check it out.