Rise of the Planet of the Apes - 4K Blu-ray Review

Rise of the Planet of the Apes 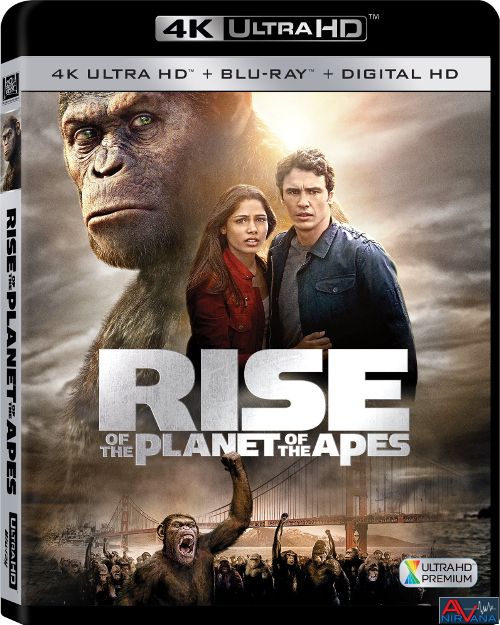 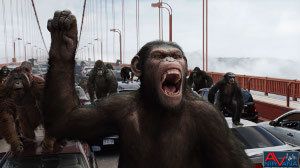 Rise of the Planet of the Apes starts out MANY years before the original, acting as a semi prequel/semi reboot of the entire series. The all hailed Caesar is actually the byproduct of a lab experiment to cure Alzheimer’s disease. His mother (bright eyes, a nod to the original in a reverse sort of way) was injected with ALZ 12 (the experimental drug) only to have Caesar born with element in his system. After the project was shut down and gone back to the drawing board, Dr. Wil Rodman takes the newborn chimp back to his home where he raises him away from the confines of the lab. It comes to light VERY early on that Caesar is more than just infected with the experimental drug. He’s proof that it WORKS. ALZ 12 has not only repaired any damaged brain cells, but also enhanced his brain chemistry to the point of being much more intelligent than he really should be.

After an unfortunate incident with a neighbor, Caesar’s existence is found out and he is sent to live with other chimps in a primate refuge. There, alone, and away from the nurturing of Dr. Rodman, Caesar plots his escape. Getting smarter and smarter by the day, the young chimp is able to infect a whole block of the monkeys and get what he desires most. Freedom. 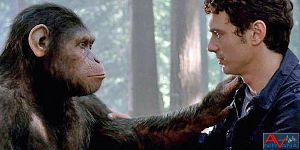 Keeping in line with the original film, Rise is a much more dramatic and cerebral film than an action movie like Dawn is. The first ½ of the movie is a light hearted dramatic film as we watch Caesar growing up and forming a bond with Will (James Franco), and Will with him. It’s not till he is caged and abused by the caretaker (Draco Malfoy himself, otherwise known as Tom Felton) that his loneliness and anger get the better of him, prompting him to question his role in a world of “dumb” monkeys and humans. The last 30 minutes brings out the action, and while it is short lives, serves only as a teaser for what is to come. Ironically, if you didn’t know about the upcoming human/monkey war it would be easy to think the film ends on a sweet and happy note, with Caesar going to live out in the wild with his new intelligent brethren. However, those of us who know what’s coming know that this is something much darker and insidious in all reality (elements of which are touched upon in Dawn).

Andy Serkis is really the heart and soul of the film though. He is a motion capture guru and completely BECOMES Caesar. Getting down on all fours, baring his teeth, yipping, yowling and the like. If you watch the special features it’s amazing to see just how much Andy infuses into the roles as it’s easy to think that he does nothing but do a few motions and the CGI does the rest. It’s actually the other way around. He does most of the work and the facial expressions, and the CGI wizards just mimic what he’s doing and overlay a monkey “shell” on top. James Franco and John Lithgow do a good job in their limited roles, but the monkeys are the true focus of the film and Andy just dominates the entire film.

Rise was actually shot on 35mm film and in the scope aspect ratio of 2.39:1, and the 2160p HEVC encoded 4K UHD disc seems to be taken from the same 2K master that the Blu-ray was (much like how Dawn was taken from a 2K master). While there is noticeable improvement in the change from 1080p to 2160p, they are sometimes subtle. Colors and textures show the most improvement thanks to the HDR 10, but the fine detail is something you’ll not always notice being THAT much better. Lines and details are still excellent (as the Blu-ray was amazing), but sometimes the CGI looks a little more “fake” (a downside in 4K upgrades I’ve noticed) as the 2011 CGI shows the creases in its armor more often. Black levels are deep and inky, while contrast levels maintain a healthy balance, giving the overall disc a solid boost over the Blu-ray, but one that may be tough to discern at times.

20th Century Fox has ported over the same 5.1 DTS-HD MA track from the Blu-ray and it is still a fantastic sounding mix for a 5.1 track. Aggressive when needed, highly nuanced, and full of life it sparkles just as much as it did back in 2011. Dialog is crisp and clear, and the bass response is amazing. The first half of the film tends to be more laid back and drama (ish) for the audio mix, but once Caesar gets to the primate hall and the yowls and screams of the apes kicks into full gear, then it picks up quite dramatically. The end escape scene with the apes leaving San Francisco is absolutely jaw dropping (listen to the shifting sounds of the helicopter from one end of the room to the other and LFE is worth the price of admission alone). I would have loved for Rise to get a Dolby Atmos upmix, but the 5.1 track is still a doozy.

Fans of the original Planet of the Apes may be surprised as Rise of the Planet of the Apes starts a new franchise with just the right amount of freshness, as well as some cool little homages from the fanbase (everyone originally thought that Rise was going to be a direct prequel as we saw the Icarus take off for mars and declared lost in the newspapers, as well as the natural conclusion with Caesar, but it’s been confirmed that this is a brand new series with elements of the originals taken as Canon). It’s not a PERFECT movie, but certainly the best Planet of the Apes film since the very first 2 were shown. Now we’re all curious to know, what about the upgrade? What makes my Blu-ray obsolete? Well, it’s going to boil down to the video and whether you want the best-looking picture available. Without a Dolby Atmos track for the audio, and no new extras (all extras but the commentaries on the Blu-ray included) the video encode is the deciding factor. It IS a solid uptick in visual quality, although a fairly minimal one, and the choice all comes down to how much the HDR (which is impressive) and upgraded resolution meant to you. Still recommended.
.

That "San Fransisco bridge scene" is pure reference audio, both from a multi-channel/directionality perspective and a bass perspective.

Sure wish the 4K version had been re-mixed for DTS:X