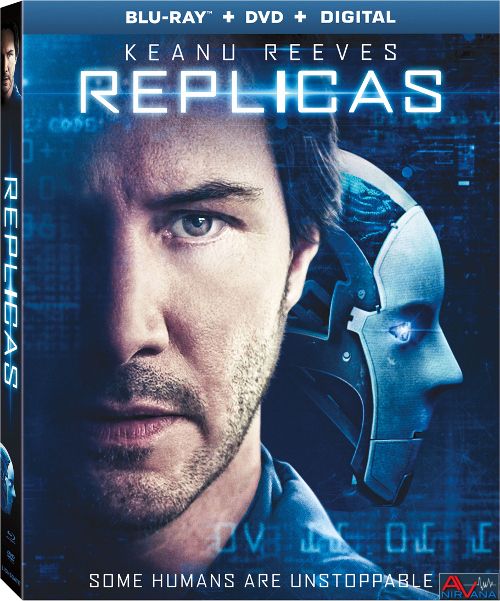 Movie
Replicas got raked over the coals when it first came out, and the reviews for the home video release aren’t any better. The story was supposedly rather rote, with an initial act that asks so many questions, only to devolve into a typical sci-fi thriller near the end. Viewing the film in it’s entirety I can kind of agree with those assessments, but don’t feel it’s AS bad as the initial reviews made it out to be. The biggest flaw from the film stems from the fact that it’s extremely predictable in the 2nd act, which completely negates all of the deep and heady questions that it brings up about ethics, morality and a “soul” during the first half of the movie. If you go in realizing that this is going to be a generic sci-fi thriller than the it’s not a bad rental at all, but I’d be surprised if you don’t seen the second act twist coming a mile away.

William Foster is your typical catch all genetic/computer/bio-engineering scientist who works for a faceless bio-tech firm named Biodyne. He’s been working tirelessly to figure out how to extract a human mind from dead/dying donors and imprint it into a synthetic brain in a robotic body. Each and every time that he and his staff get a breakthrough, it’s followed by impending failure as the brain rejects the synthetic hose. At the verge of losing their funding, Foster, his lovely wife Mono (Alice Eve) and their three kids Zoe, Matt and Sophie head out on a weekend vacation only to be met with catastrophe (like we didn’t see this coming). A near head on collision with a tree ends up with their car at the bottom of a lake and William the only survivor. Thinking quickly and with the desperation of a man who’s about to lose his family, William and his partner Ed (Thomas Middleditch) quickly save the neurological imprints of his family. Heading home, William and Ed do the unthinkable. They clone the bodies of the 4 dead Fosters (which has never been done on HUMANS before, just animals) and while the bodies mature the tortured father tries his best to overcome the problem that’s keeping a brain transplant from taking hold.

Replicas starts out with a fascinating take on human replication. It tries to dissect the differences between a human brain and the ever fascinating body, while blending in ideas of a soul, morality, and the ethical dilemmas of tampering with someone’s brain when bringing them back. The movie almost seems to be heading into a tragic ending until the end of the 2nd act “twist”, wherein the movie takes a drastic tonal side rail and shoots into your typical sci-fi thriller. William and his family have to escape the clutches of the evil corporation and all of the ethical and moral dilemmas that William has been pondering and bypassing with his Dr. Frankenstein like maneuverings is jettisoned and we’re left with some action and an overly happy ending that just sugarcoats everything with a syrupy sweet final sequence.

The film was never overly intelligent, but it DOES bring up some neat questions early on. It teases us with moral dilemmas about erasing someone’s memories in order to keep them happy, we have a question about what makes a human human, complete with the theory of the soul, and then suddenly those questions are left unanswered and William and his family are dodging bullets as well as those questions. Penned by the writer who gave us such “classics” like London Has Fallen, and the semi decent Peppermint (his claim to fame was writing the small The Punisher: Dirty Laundry short that almost gave us Thomas Jane back as Frank Castle), Replicas meanders around with its heart on it’s sleeve, and split tone story that has the first half of the film feeling like a completely different movie than the final half.

Keanu Reeves is a strange one in that he’s had a long history of being a powerhouse acting up until the turn of the century before his star faded, only to have a resurgence of popularity thanks to John Wick. He’s a solid actor with a rather bland persona, but he’s got a strange sort of charisma to his Bill & Ted like performances and he does a decent job here. You can tell he’s kind of phoning it in most of the time, but he does give a solid effort to show some pained emotion as a father loses his entire family. The rest of the cast is your typical B-list acting with Alice Eve criminally under used in the film. The actress emotes every scene she’s in, yet she’s given so little to work with that you feel like she’s being constrained by the limited scripting.

I couldn’t find much information about the shooting style/source for Replicas, but from little I could glean from the end credits and some online digging it looks like it’s another Arri Alexa digital shoot at a 2K digital intermediate. Either way, whatever technology was used, the results are generally fantastic, with crisp detailing even in the darkest shots of William Foster’s basement, to the bright overly exposed outdoor shots of South America (at least that’s where I’m assuming they’re based). Colors can be dim and grim in the interior of Biodyne, but brighter and cheerier once we get to William’s spacious home. Fine details are exquisite, showing off every line and crease on the face of Keanu reeves, but is slightly marred by some wonky CGI that belays the film’s low budget. The robot interactions at the end of the movie are really janky, and there’s some strange green screen artifacts that almost look like tearing or interlacing at points. Otherwise this is a really great looking 2.39:1 framed encode by Lionsgate.

Lionsgate didn’t skimp on the sound design either. Even though it’s not a huge budget film, the 5.1 DTS-HD MA track is full and vibrant from the get go, with a helicopter scene that lands with ground shaking authority. The lab work is filled with all sorts of high tech beeps and boops (technical terms, I assure you) as well as a rather intense score that fills out the back end and low end of the room quite nicely. Vocals are crisp and clean, and the front sound stage has some neat panning effects during the car chases and action sequences in the latter half of the film. It’s noting overly spectacular, but the 5.1 mix is a very capable mix that is definitely above average.

​
Replicas did get trashed in it’s theatrical reviews, and I can see why easily. It’s not a very cohesive movie and it’s more intent on delivering a generic sci-fi thriller than answering the heady questions that it brings up in the first act. I’m not sure where the disconnect came from, but the final act is just sooooooo syrupy sweet and ends on such a cliched high note that it completely undercuts much of the first act (again, you can kind of tell that this is a movie at odds with itself). I had a decent enough time with it as it is, but it’s really a rental more than anything, even though I ended up liking it a good bit better than some of the other reviewers I discuss movies with behind the scenes. The audio and video are fantastic though, and while there’s not a whole lot of extras, the technical specs are a treat for any home theater system. Still, this is a rental, but a decent enough one if you like Keanu reeves and Ex-Machina stylings in a cheaper frame.

Thanks for the review. I will skip this one.

Boy... Keanu has spent his fair share of time hooked up to gadgetry, eh?
N