Ready or Not - Blu-ray Review 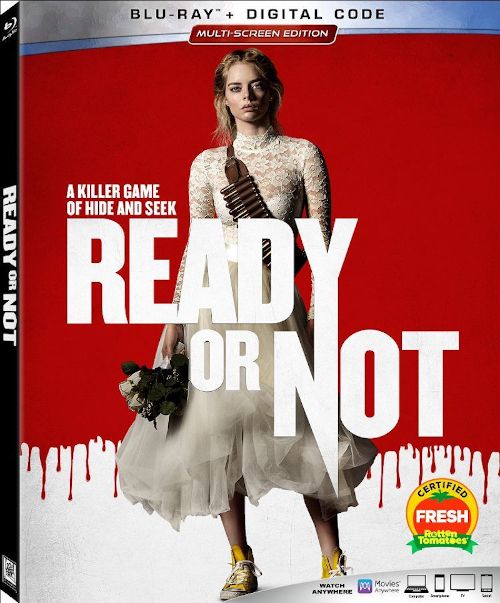 Movie
Faustian “deals with the devil” are a dime a dozen in storytelling, and it gives me a cheery heart to say that just because the basic plot line behind Ready or Not has been done before, the sheer amount of fun and humor blended in with the gory tale makes it gloriously fun romp. The trailer pretty much gives away 90% of the plot before you ever get started, but it’s really not that big of a deal. The audience is having too much fun cheering at the heroine to get out of the pickle she’s in, and revel in the demise of those following her. The movie doesn’t pretend to be anything that it’s not, and just has fun with a gory horror story line, slathered in some good old fashioned black humor.

They always say you don’t just marry the groom/bride, but rather you marry the family as well. Something that poor Grace (Samara Weaving, who looks an awful lot like Margo Robbie) is going to find out the hard way as she marries into a high class family when she ends up tying the knot with Alex Le Domas (Mark O’Brien). The Le Domas’ are a high class family steeped in tradition and high class American aristocracy, having been born into money for almost two centuries. Their predecessors first started out in the gaming industry by making playing cards right around the time of the civil war. Then they moved up to board games, video game, and in this generation have even acquired a couple of pro sports teams as well. While that may seem a strange thing to base a “legacy” on, that’s not the bizarre part of their history.

The bizarre parts goes back to ancient times when the very first Le Domas started the empire. He made a bet with a mysterious gentleman years ago with a mysterious puzzle box. Now it’s become a tradition that they play a game every time that a new family member is brought into the fold. However, the mysterious puzzle box that was handed down over the generations chooses the game at random. 99% of the time it ends up being something completely innocuous, like Old Maid, Backgammon, or Poker. But every few decades that “one” unlucky card is chosen. The game of hide and seek. Unlike other games of hide and seek this isn’t played about and forgotten. The new member of the family is “it” and has to hide until dawn, or until the other family members hunter him/her down and sacrifice her in a ritual. A ritual they MUST perform, or they believe that their entire family will be wiped out by the mysterious owner of the box that started this centuries ago. Yup, Grace pulls that unlucky card, and she’s “it”. Finding out real quick that this isn’t an innocent game of hide and seek, Grace now has to fight back with everything she’s got to make it out of the madhouse that is the Le Dorma mansion.

Ready or Not winks and nods at the camera the more the run time increases. The first half of the movie is much more traditional horror with a few jokes thrown in, but as the body count rises and the gore increases, so does the black humor as well. The tongue in cheek jabs at the plights of the 1% and their efforts to kill poor grace are only made funnier as you realize that they don’t even know IF anything bad is going to happen to them if they don’t kill Grace. It’s just “tradition” to hunt down and kill the person who chooses the Hide and Seek card. It’s this “is it or isn’t it?” type of play that makes some of the kills and interactions all the funnier, with the ending being so gleefully over the top that you can’t help but laugh along with Grace (gotta see it to understand that particular little bit).

Acting wise I was really impressed with Samara Weaver. I don’t remember seeing her in anything major recently, but she pulled off the terrified and angry Grace quite well. I was shocked to see 90s movie stars Andie MacDowell and Steven Czerny (Mission Impossible) playing momma and papa Le Dorma, and their skills are greatly appreciated. The rest of the cast is solid for what they are, but really the three mentioned above are the ones that elevate this movie from just a simple black comedy to something truly delightful.

Rated R for violence, bloody images, language throughout, and some drug use

Ready or Not was filmed using Arri Alexa digital cameras and transferred to an unknown resolution master (I’m guessing 2K, but there’s not authoritative source of 4K or 2K that I can find) for the home video release of the film. Fox’s Blu-ray encode is quite impressive, showing off tons of fine details, even though the film has been color graded with a heavy, almost sickly, coat of yellow and bathed in darkness as Grace is forced to escape the Gothic mansion. The whites of her dress still pop, as do flashes of headlights from a car, otherwise the colors and light are rather subdued throughout the movie. Fine details are excellent, as you can see the blood and grime cover Grace’s body, as well as the nicely detailed Gothic style mansion that she’s trying to escape from. Shadows show off some goodly details, and only minimal black crush is present as well.

The 5.1 DTS-HD MA track is just as effective as the video score, and while it doesn’t implement a ton of typical “jump scares” throughout the movie, the ambiance is rich and varied in the Gothic mansion. Sounds of a gunshot startle you awake from a quiet moment, as does the scrabbling of feed down stairs, or the creaking of broken ladder rungs in the surround aspect of the track. LFE is tight and punchy, adding weight to some of those more startling moments, as well as supporting some of the background elements, such as creaking boards or the thumb of a body hitting the floor. Dialog is crisp and clean, locked up in the front of the room and more that clear at all times.

• Let the Games Begin: The Making of READY OR NOT
- Part 1: A Devil's Bargain
- Part 2: The Le Domas Name — A Family Brand
- Part 3: 'Til Death Do Us Part
• Gag Reel
• Audio Commentary by Radio Silence and Samara Weaving

Ready or Not doesn’t have any pretense of being anything more than it actually is. A fun, gory, Faustian movie that is soaked in black comedy and a cheeky air. The trailer pretty much gives away the whole of the movie, but it’s really the journey that counts. Or more accurately, the gore and fun of watching Grace wack and slash her way through a host of monstrous white collar folks who just want to sacrifice her to the devil. 20th Century Fox’s Blu-ray release is more than appealing, with great video and audio, and some decent extras as well. The movie is black comedy horror done right, and just what the doctor ordered for a fun watch.

Thanks for the review. Will check this out once available on amazon prime/netflix.

I will definitely Redbox this one asap. My cup of tea
Thanks for the review!

Might just have to check this out. Thanks for the review.

Watched it last night and thoroughly enjoyed it.

This is on my Amazon watch list! Although, might be a good RedBox pickup as @Asere points out!