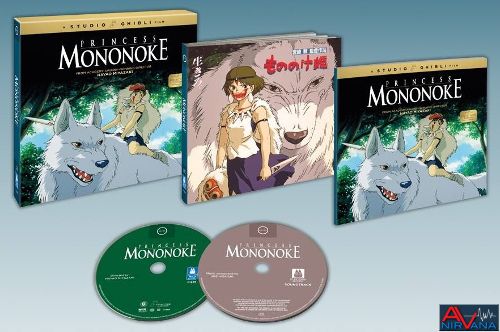 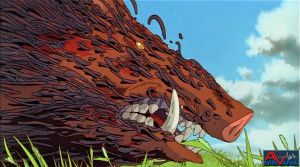 Movie
Princess Mononoke is one of Hayao Miyazaki's most popular and enduring feature films. I hear it discussed in anime enthusiast circles, I see it shown during conventions, and it's usually a staple during any Miyazaki movie night. It's an epic spanning feudal Japan, when Samurai fought for hire or a single master, when iron was highly coveted, and rifles a new invention. It pits man against animal gods: wolves and boars and apes, and the mysterious Forest Spirit. Its soundtrack sweeps you into a world of battle and industry and strong women, and one man who wanted to find peace.

Ashitaka is one of the last of the Emishi, a people driven to near extinction by the Japanese emperor, known for their unity with the forest, their uncanny skill with the bow, and for riding giant red elk instead of horses. As Ashitaka returns to his village, a monster attacks, nearly killing three young girls, including Ashitaka's sister. He fires an arrow into the monster's eye, and it retaliates, leaving him with an ugly, fatal scar. As it dies, the monster transforms into a giant boar, a god, possessed by fear and rage that turned it into a raving demon. The village wise woman sends Ashitaka west to find the forest from which the boar came, hopefully to find a way to save his life, but more importantly, to "see with eyes unclouded." As Ashitaka travels, the scar proves to be almost a living entity, triggered by battle and blood and making him not just a keen shot with a bow, but a butcher - decapitations, severed limbs, all with a single arrow. He meets a monk who directs him toward a legendary forest, home to the Great Forest Spirit, rumored to be the god of life and death.

However, Ashitaka is not the only character with a weighty quest. Bordering this same legendary forest is an ironworks run by the Lady Eboshi, a business-savvy, fierce swordswoman. She fights the animal gods to claim the iron under the forest trees, and she drives off a neighboring lord who tries to subdue her into giving him the iron for which she labors so hard. In her ironworks, she employs women from local brothels, giving them honest work and honest husbands from among her riflemen and cattle drivers. She even houses lepers, treating them as people when others would not. Lady Eboshi is loved by her people, and even Ashitaka recognizes her as a formidable leader.

But not all love the Lady Eboshi. A young girl, a wolf-princess, hates her with all her soul, having vowed to kill her to stop her murder of the animals and trees. Adopted by a wolf goddess, Mononoke exists solely to defend her mother's forest and slaughter those who threaten its peace. As Ashitaka approaches the ironworks, he encounters Mononoke and her wolves as he saves two men from drowning along the bank of a flooded river. She departs with barely a word, and Ashitaka continues through the forest with the two men, guided by the adorable kodoma, and arrives safely at the ironworks. While Ashitaka observes Eboshi and her people, Mononoke attempts an assassination, which Ashitaka foils. In doing so, however, he is shot near the heart, and Mononoke, apparently in return for her own life, takes him to the island of the Forest Spirit to ask it to heal him. It does, but the fatal scar remains. 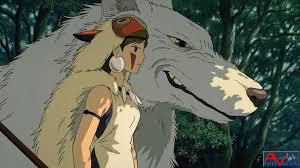 Confounded as to why the Forest Spirit would allow him to live, only to die slowly from the boar's infection, Ashitaka learns the other side of the conflict: the wolves' struggle, the boars' demise, why they fight, why they remain, and why so many different human factions want the forest. He uncovers a plot to slay the Forest Spirit and bring its head back to the emperor, an atrocity fueled by the rumor that the head will grant eternal life. Outraged by the hatred and massacre, Ashitaka involves himself in the battle in a desperate attempt to bring peace, and win Mononoke’s heart.

Princess Mononoke was the second Miyazaki film I ever saw (the first being Kiki’s Delivery Service). Given that my experience with anime at the time was limited, I wasn’t sure what to expect. I was appropriately unnerved by the transformation of an animal god into a demon of hate, and awestruck at the beauty of the Forest Spirit and his woods. I felt a conflicted sense of admiration and contempt for Eboshi, and absolute conviction toward Ashitaka and his cause. Mononoke herself I loved instantly – a warrior child raised by wolves, living in a vast forest, able to speak to animals and spirits and gods. I pitied her, however, that she was so stubborn as to refuse to understand Ashitaka’s actions. I suppose one could say it’s because of the difference in their environments – while both were raised in woodlands, and with the ability to commune with the creatures therein, Ashitaka lived in peace, humans and animals partners in their existence, while Mononoke knew nothing but war.

This concept of a human child raised by wolves is well-known. Rudyard Kipling introduced the world to Mowgli in his epic classic The Jungle Book, which Disney immortalized as a kid’s musical animated feature (leaving out much of the original plot, I might add). While I adored this idea as a child, and wished I could be raised by a pack of lions or tigers or cougars (I lived in northern CA, and I ADORED cats), I wondered what would prompt a wolf, or any man-hunting creature, to adopt and raise a human child, even figuratively speaking. Is there some kind of symbolism in it? A fierce predator is capable of compassion and nurturing and takes an inferior species as its own in an attempt to… improve it? Protect it? Or perhaps a more subversive motive – use it against its own kind, a kind of trump card.

This last may be a reason Moro, the wolf goddess, chose to spare the infant Mononoke when her parents tried to use her as a decoy to save their own lives. Mononoke may have originally been intended as an assassin, able to infiltrate a human settlement where a wolf had no hope of entering, or she could have been a symbol of what man and beast could accomplish together, a symbol with everyone but Ashitaka ignored. He saw what she represented, but no one listened, leading to ruin and slaughter and despair.

Don’t be deterred by the somber themes of the movie, however. It’s a beautiful work of art. The animation is superb, the scenes vivid and intricate, and the musical score a delight to hear. And fear not, it ends on a hopeful note, as all Hayao Miyazaki films do.

Rated PG-13 for images of violence and gore 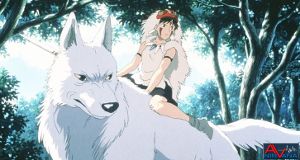 The difference between the Blu-ray and older DVD included in terms of picture quality are truly startling and amazing. Colors that were once a bit muted and lifeless surge with vitality and a dimensionality that hasn’t been seen before. The older DVD that Disney released years ago is a stark comparison and goes to show just how beautiful Miyazaki films can look. The contrast look extremely natural and there is more detail that I possibly could have hoped for in full 1080p. Black levels look amazing and while there is some crush, it’s very minimal and more of a nitpick than a noticeable problem. I can’t stop marveling just how big the difference is, as most animated movies have a smaller gap in quality between their DVD counterparts and a Blu-ray release than this one was. Even comparing against the Disney Blu-ray there's not a whole lot of difference besides the Shout Factory release being a higher bitrate. If you have checked out or bought the regular Shout Factory release from last year, then this is the exact same code, just sans the DVD and including a Sound Track to go along with the swag. 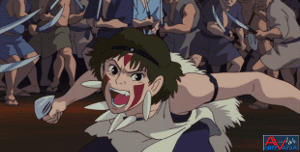 Shout uses the same dub starring Billy Crudup, Minnie Driver etc, that they have used for years and it comes in a very strong DTS-HD MA 5.1 track that very closely resembles the included Japanese DTS-HD MA track in strength and intensity. Both tracks make very good use of all 5 channels, giving it a very immersive feel. The surrounds are used nicely with strong usage during the battle sequences and even the forest walk sounds amazing as you can pick up the crunches and rustling of tree branches coming from all around you. There’s a nice solid “oomph” in the low end during battle sequences and the thundering of pig hooves along the ground is impressive to say the least. Dialogue comes through crisp and clear on both audio tracks, with just a slight edge to the Japanese track in my opinion.

Now, the big reason that I'm going to recommend this version of the film (and the regular Shout Factory release) is due to the mess up that Disney had on their Blu-ray for the subtitles. The English track is the same across the two releases, but Disney used Dubtitles for the original Japanese language translations, which was HIGHLY irritating for someone who wants to watch it in the original language (that means they just copied over the subtitles for the English translation and overlaid them on top of the Japanese track). Shout Factory has gone back on this release (and their regular combo pack from last year) and given the original language track back in subtitles, so us fans of the Japanese audio will be happy 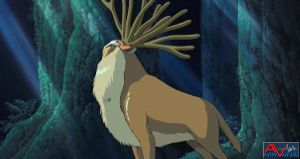 ​
Princess Mononoke is a vibrant and thought-provoking story about the industrial revolution and how it destroyed the tenuous harmony between humans and nature. Miyazaki explores themes like fear and hate and war and sacrifice, life and death and revenge and compassion, all encompassed with brilliant animation and a majestic score. There’s a reason this film is one of his most popular, and continues to be perhaps his greatest battle epic to date. This version of the film is geared directly for the collectors amongst us, as it's a bit more feature packed than Shout Factory's stand alone release last year. It comes with the same Blu-ray disc that is in the previous set, but it excludes the DVD and gives us the official sound track, as well as some really nice collector's packaging, and a full 40 page book of art. It's a great set, but if you have the previous Shout Factory release I would only upgrade for the collectibility of it. If you still have the Disney release, then I still highly recommend upgrading for the botched subtitles that Shout Factory fixed, whether it be this issue or the regular edition that Shout Factory release. I highly recommend it, but not for small children.