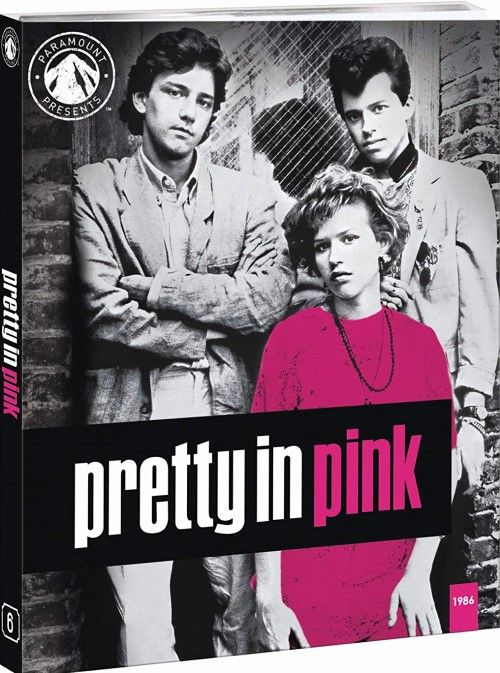 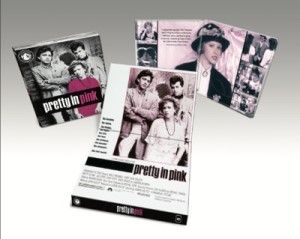 Movie
Has it really taken this long for one of the original John Hughes movies to finally hit Blu-ray? I mean, I could understand 4K UHD, but the fact that Pretty in Pink was NEVER released on Blu-ray is kind of shocking. I actually saw the press release and figured that this “Paramount Presents” disc was a re-release, then I checked my collection and saw I only had it in DVD. I knew for a fact that my wife would have beaten me within an inch of my life if it was out on Blu-ray and didn’t buy it for her, so that can only mean it was never released.

Pretty in Pink is one of the 80s classics that sometimes gets praise heaped upon it for the John Hughes writing, and also gets some flak as well. I’m one of those people that really enjoys most of the movie, but there is one part to it that almost guts the entire premise. That is, the end. Pretty in Pink follows up The Breakfast Club and Sixteen Candles with yet ANOTHER John Hughes project (although this time he only writes it instead of directs it as well), and the third major motion picture with breakout star Molly Ringwald. Which, ironically enough, would also be the last smash hit for Molly, who would end up with a solid career as a low budget actress, but after Pretty in Pink she was no longer the major draw like she had been with Sixteen Candles and The Breakfast Club. Personally I don’t think that it was anything to do with Molly herself, or even the film, but Pretty in Pink WAS a disappointment for many John Hughes fans, and it all had to do with that ending. Hughes is infamous for being formulaic, but also known for being very poignant and serious with his themes of being true to oneself and sticking up for yourself. The problem was, he mixed up the formula for Pretty in Pink and tried to have a surprise ending, but that ending turned out to be his worst decision. It completely undercuts the themes of being true to yourself that the film built up for nearly 90 minutes, and then just tosses it out the door for a saccharine sweet ending that leaves the audience wondering WHY he chose to go that direction.

Andie (Molly Ringwald) is a dirt poor student in a rich person’s school, and she’s got a crush on hunk Blane (Andrew McCarthy). The two are like oil and water socially. Andie is smart and creative, while Blane is rich and slightly aloofish. The two obviously have feelings for each other, but they tend to dance around the subject (as 18 year old’s do), while Andie pines away for her crush with her friend Duckie (Jon Cryer) and her boss/friend Iona (a hilarious Annie Potts) until FINALLY Blane asks her out. 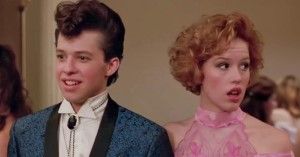 Everything is on cloud 9 and nothing can bring her down. Even though her divorced father (Harry Dean Stanton) is living his life in sloth due to pining for his wife who left them, and Duckie is bitterly lamenting the fact that he never was able to tell Andie that HE was actually in love with her. BUUUUUUUUUUT, this is a John Hughes movie and the other shoe falls in the form of Blane’s best friend Steff (James Spader), a sleazeball who does everything he can to destroy the two’s relationship due to the fact that he considers Andie a nobody.

Pretty in Pink is one of the 80s big hits, and while I really do despise the ending, it has a lot going for it. Jon Cryer knocks it out of the park as the goofball Duckie who is one of those high school students who believes that he can clown his way into a girl’s heart, even though he does have the best of intentions. There are so many lines and scenes that have invaded pop culture from the flick, and we leave the best for last. Annie Potts. Annie DESTROYS every scene she’s in as a 30 something wood elf who is about as “normal” as Motley Crue coming into a church service. One of the most visually striking things about her character is just how out there her outfits are. One moment she can have a mohawk and spiked hair, the next a white wig, and in the blink of an eye she can have a beehive do. When she actually settles on being conservative (well, for the 80s) it’s actually more shocking than any hairdo she could ever pull off in the film.

As with all the “Paramount Presents” line, Pretty in Pink gets a brand new 4K remaster and while I haven’t seen my DVD in a while, it most certainly blows it out of the water. I was a little bit worried after how badly To Catch a Thief was DNR’d to blazes, but this encode is excellent. The opening scene shows some heavy grain (and has always looked a bit ugly), but once you get to Molly waking her father up, the image suddenly cleans up. There’s a nice layer of film grain (that only suffers from a couple of scenes where grain spikes heavily, such as the scene where Blane walks Anie from her work on their first date) that looks very natural, and the fine detailing is GORGEOUS. Combine that with some incredibly rich and vibrant colors and you have a recipe for one great looking disc. I only noticed a few soft shots here and there, and along with the grain spikes are about the only negative thing I can possibly say about the disc. Simply put, this is a knockout. 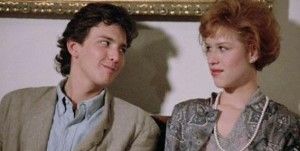 Pretty in Pink enjoys a robust and totally 80s 5.1 DTS-HD MA track that really thrives on the score. The film is very much a John Hughes dramedy, and that means a lot of the time the track is very front heavy. However, that is counterbalanced by the 80s pop-rock score, which really fleshes out the sound stage. LFE is mostly relegated to the score, but it comes through effortlessly and subtly, while the surrounds are live with the music. There’s also the hustle and bustle of high school to keep those rear channels active, but as I said, this is a dramedy track at heart and that means lots and LOTS of front heavy dialog for the rest of time. 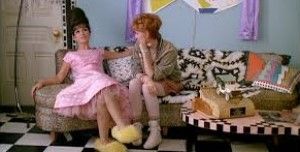 As a huge John Hughes fans (especially his 80s works) Pretty in Pink is one that I like, but don’t love. It borrows a lot from Sixteen Candles, but tries to pull a twist ending and it kind of undermines a lot of what went on. It’s still fun, still iconic, but one of the movies that I have a hard time LOVING from his works. As for the Blu-ray itself, it’s generally amazing. The new 4K master is stunning and the audio is no slouch either. My only real grip with the package is the fact that Paramount decided to make some brand new extras, but left out nearly ALL of the legacy extras on the old DVDs. It’s something that they’ve done with most of the “Paramount Presents” lineup and it’s kind of odd. Not a deal break for me personally as I’m not an extras fan, but many fans will find this a little frustrating as they’ll have to keep their DVDS to keep most of the extras. Check it Out is my final recommendation.