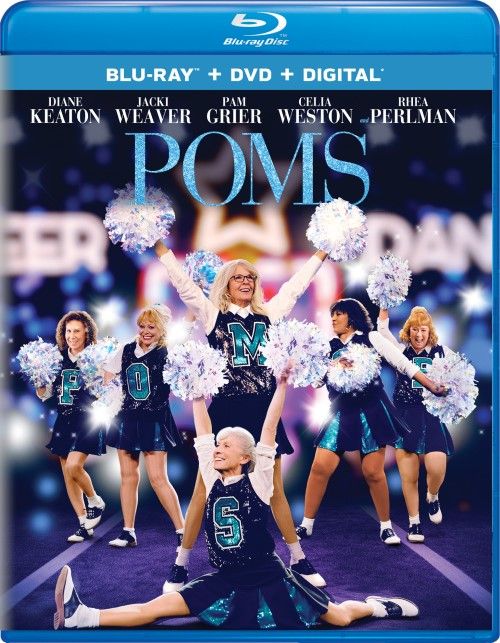 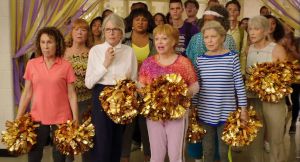 Movie
I’ve noticed that more and more movies over the years are coming out about people aging and refusing to act in their stereotypical age bracket, in effect living their elderly years like they should have lived their youth. Films like Space Cowboys, Last Vegas, and Going in Style all deal with these themes with varying success, and Zara Hayes decides to cash in on the action too, except with an all female twist. Poms is generally cute, and has a LOT of enthusiasm for all involved, but ultimately is a bit too trite and generic for its own good (as a film that is).

Martha (Diane Keaton) is dying from ovarian cancer, and instead of just surrendering to endless painful hours of chemo therapy in a desperate effort to stay alive, she chooses to fight and liver her remaining days out the way SHE wants to. She moved into a peaceful retirement community after selling all of her worldly belongings and settles down to live out her days in comfort. However, boredom soon sets in and a childhood dream of performing as a cheerleader prompt her to create her own club at the retirement home. A cheerleading club to be precise. 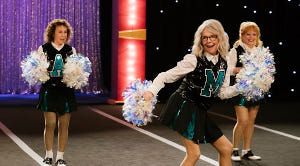 With the help of her friend Sheryl (Jacki Weaver), she starts up an 8 person cheerleading squad, all comprised of other senior citizens, despite the complete ridicule and derision by the retirement home’s manager Vicki (Celia Weston). Emboldening her fellow retirees, Martha and Sheryl pump up the volume and attempt to get their aching bones into shape. However, when the conniving Vicki shuts down their club due to the embarrassment it may cause the home, the women decide to branch out and do this all on their own, and for a state wide cheerleading competition to boot where they’ll be competing against high schoolers.

Poms is kind of cute and has a lot of enthusiasm among the ensemble female cast, comprised of greats like Pam Grier, Rhea Perlman (Cheers fame), Diane Keaton, Celia Weston, and Jacki Weaver. The film’s heart is definitely on it’s sleeve, and the enthusiasm of said actresses really push it past where it would have been with lesser excitement from the cast. The writing, though, is a bit trite and really doesn’t push any genre boundaries. It’s really hard to get behind the emotions of Martha preparing to die and live her last days with dignity when the entire script is pretty much predicable from the get go. You can see where everything is going down to the simplest beat, as Zara Hayes writing and directing is as cookie cutter as it gets.

Rated PG-13 for some language/sexual references. 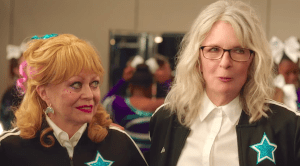 I can’t find out what cameras were used or what resolution the master was, but I’d be willing to bet my gold fillings that this was a digital shoot. The image is rather glossy and warm with slight honey colored undertones to the otherwise natural looking color grading. Details are generally very pleasing, able to show off every wrinkle on our cheerleaders faces, as well as stitching and other intimate details on clothing and backgrounds. Blacks are deep and dark without signs of crush and banding, and while there is some softness to the picture from the honey colored glow, the overall picture quality is sharp and clean. 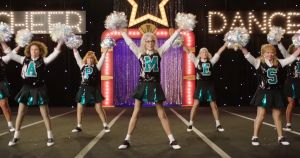 The 5.1 DTS-HD MA track on the disc is just what you’d expect for a drama like this. It’s heavily front loaded for the most part, with a strong emphasis on dialog and laughter coming from the background. The score accents most of the surround activity outside of the end cheer demo, and those moments get a lot more punchy and vibrant, with LFE activity and some pretty solid surround usage with the crowd cheering and roaring above the music. It’s a simple track, but one that’s effective and works well within the genre confines of the movie’s premise. 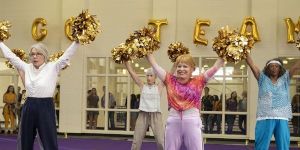 Poms has an admirable (if not slightly zany) premise that kind of works in some ways. The sheer enthusiasm of all the actresses involve really sells the insane idea, but at the end of the day it’s just another generic dramedy that fails to really take hold of the audience in any meaningful way. Everything plays out a bit too predictably, ending with everyone cheering and raving about the senior cheerleaders and the main character eventually passing away only to pass the torch to her comrades. Simple, effective, kind of cute, but kind of laborious as well, Poms is a serviceable dramedy that works as a low end rental more than anything.

Thanks for the review. I saw the trailer long time ago and I thought, no way. I am skipping this one. lol.