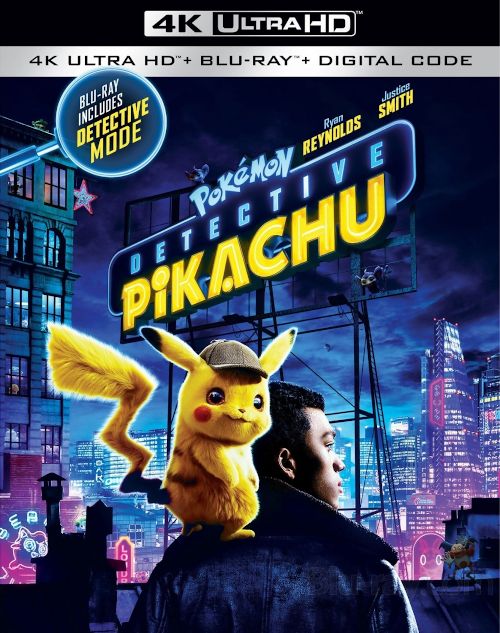 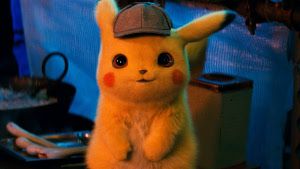 Movie
The Pokemon franchise has enjoyed massive popularity for the last 21 years, raking in BILLIONS with card games, anime TV shows, animated movies, and a huge resurgence in popularity as grown millennials who grew up with the stuff in their teens are dodging traffic with the new mobile worldwide game. Back in 1998 I was finishing up high school and even though EVERY one of my friends were playing away on their gameboys or trading cards, I was staring at them like they were crazy. I really did try to get into the games (I played Gameboy nonstop as a teenager) and just couldn’t see the appeal. The animated movies and anime were aimed more for younger kids than I was, but it was impossible to miss the series being played nonstop when I was wasting massive amounts of time during my college years. Fast forward to today and people are losing their minds playing the mobile worldwide game (and yes, nearly getting hit with cars as the game utilizes geo location data on your phone to show you where pokemon are in the “real world”, and crazed people would do anything to get that Charzar!). So it’s not out of the realm of possibility for Warner to go the distance and make their 4th Pokemon film, this time a full blooded live action movie with Ryan Reynolds voicing Pikachu.

Yes, I’m going to admit it. The only reason I went to the theaters to see Pokemon: Detective Pikachu was because of Ryan Reynolds. The man is absolutely hilarious and has become almost as meta as Keanu Reeves has lately, and the idea of making him as the titular character was something that no one could fathom (well, except for probably Ryan Reynolds). I went in hoping for something fun and spectacular (especially with the large budget behind the movie’s production), but came out feeling exactly like I did when all my friends kept pushing me to play Pokemon games on Gameboy, disappointed and bewildered why this is even a thing. I get, it’s not aimed at me, and I can roll with that. Plenty of films that I’ve watched I fully understand that I’m not the target audience and try to see it through their eyes. Sadly it’s not just lack of enjoyment with the source material, but rather that the movie itself is not that great of a movie. It’s got some magnificent cinematography, great voice acting by Reynolds (who ad libs like he always does)

While this means the movie is rather uninspired and rather generic, it doesn’t make it a terrible movie. The film revolves around Tim Goodman (Justice Smith), a 21 year old man who has settled down as an insurance adjuster after giving up his childhood dreams of becoming a Pokemon trainer. However, this world gets turned upside down when we learn that his father has died in a car accident under suspicious circumstances. Going back to Rhymes City (a city where Pokemon and humans live in harmony) to collect his father’s possessions, Tim runs into a Pikachu rifling through his father’s stuff. For some magical reason Tim can actually understand this Pikachu and vice versa (instead of the normal “pika pika!” sounds they normally make). Pikachu claims that he was his father’s Pokemon partner and that his father Harry is still alive. Now it’s up to the two of them to figure out where Harry is, and find out WHAT or WHO was after him. 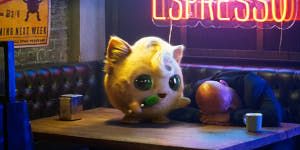 It’s pretty straight forward on paper, but Detective Pikachu has a lot of exposition and sub plots to open up here, and not all of them get opened up fully. Characters lie stagnant for most of the story, and even exposition is sloppily revealed through voice over and Ryan Reynolds wisecracks. When we get to the main villain there’s not a whole lot to keep you interested outside of naming all of your favorite Pokemon. Which is really what the film seems intent on doing, shoving dozens of different classic characters in the film for you to go “I remember that one!” and move on to the next one before you start to realize that there’s not a whole lot behind the curtain.

Reynolds is probably the highlight of the film (as you would expect) with his constant wisecracks. Sadly they can’t elevate the film past it’s simple and sloppy creation, and only act to mask the cracks and seams that are easily seen if you sit back and look at it critically. The movie itself is not BAD per se, but just lazily written and mainly an appeal to the hardcore fans. Non hardcore fans may get some good chuckles from Ryan Reynolds, but all the other actors seem to take backstage to the veteran comedic actor.

Rated PG for action/peril, some rude and suggestive humor, and thematic elements.

Shot on 35 mm film and transferred to a 4K digital intermediate for the home video release, Detective Pikachu sounds just perfect for a reference quality disc. HOWEVER, if you saw this in theaters, then you know exactly what I’m going to say next. Detective Pikachu was very specifically grades and stylized to create a sense of noirish hard boiled detective flair to the visuals. Also couple that with the fact that this is a HEAVILY CGI’d film that required some blending for the CGI and live action stuff to look homogeneous. With that in mind the movie is heavily heavily soft, with a nice layer of grain artificially added in post production to help blend the CGI with the live action (and of course to give it that old fashioned detective look of yesteryear). This means that the upgrade from the Blu-ray to the 4K is very very subtle, and really doesn’t show a whole lot of textural detail differences. The use of the HDR is also subtle, but very noticeable if you know what to look for. The grain levels seem higher in the 4K UHD presentation (most likely because it’s highlighting the natural grain that the Blu-ray was too soft to render) and the black levels show some deeper and inkier depth to them. Colors pop a tad more than the Blu-ray, but once again, the differences are very sleight. It may sound like I’m bagging the disc, but really, this is something that was done stylistically and is not a fault with the encoding whatsoever. I knew the minute I saw the film in theaters that the home video release would be super soft, and that theatrical experience has been replicated perfectly on the 4K UHD.

Warner once again gives a good Atmos track on both the Blu-ray and the 4K UHD disc (both reviews will feature the same audio review), and Warner again also provides a 5.1 mix to accompany the Atmos track (although it is in 5.1 Dolby Digital instead of their usual 5.1 DTS-HD MA lossless mixes, AND it is not chosen by default, the Atmos track is). The mix is very solid and gives a lot of depth to the pokemon battles. The end battle with Mewtwo and Pikachu is awesome with the surrounds whistling and roaring from all sides. The bass is tight and punchy, but I noticed we have a steep roll off right around the 20-25 hz mark. It’s not a massive roll off like Disney’s anemic bass tracks, but it sucks some of the power out of the heavier duty action shots. Dialog is clean and clearly replicated and overall it’s a solid contender, although not one of the best Atmos tracks out there.

Detective Pikachu is a film that’s aimed directly for the hardcore fans of the Pokemon franchise, while still trying to draw in as many new viewers as possible. If you’re familiar with the different Pokemon from the games and anime then you’re going to have a blast with picking out all of your favorite characters and watching them battle in (semi) live action on the big screen. HOWEVER, the film is not going to be everyone’s cup of tea and definitely not this reviewer, even though I grew up with Pokemon as I’m in the perfect target age bracket. Sadly I’ve never been able to see the appeal of the games or anime, and the movie does nothing to change that for me. The disc looks rather neat both in Blu-ray and 4K UHD, as it has been heavily stylized and the cinematography is simply superb. However, that can’t make up for the lackluster story which is only semi entertaining due to Ryan Reynolds voice acting. Whether you get the 4K UHD or the Blu-ray isn’t really a big deal as the differences between the 4K and the Blu-ray are slight in the video department and identical in the audio department. But in my opinion, this is one you might want to rent unless you’re a hardcore Pokemon fan.