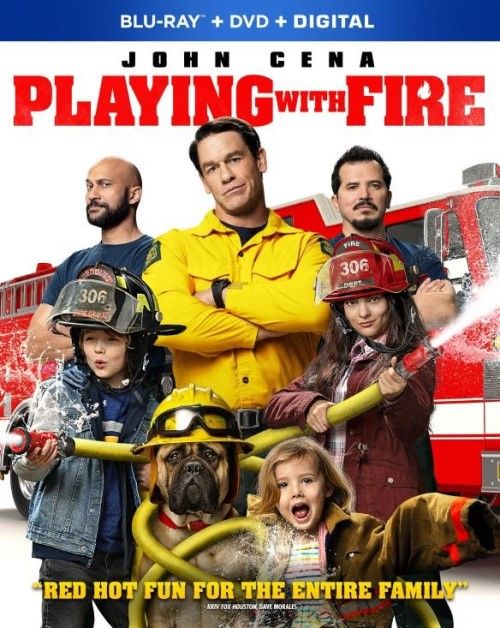 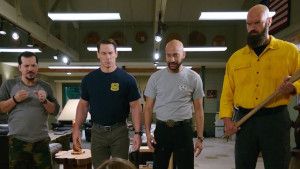 Movie
I had this nervous feeling in the pit of my stomach when I saw the trailer for Playing with Fire. I really liked the actors involved with this project, but something in the trailer was making my lizard brain go crazy with “danger Will Robinson!” blaring in the background of my mind. When I saw the Nickelodeon symbol flash by at the beginning of the opening scrawl I knew that I had made a bad decision watching it. By the time I was not more than 15 minutes through the flick I said “yup, I really need adult beverages to get through this”. Playing with Fire tries to blend firefighter heroics like Only the Brave, with 1990s family friendly comedy scenarios, with the end result being a nauseating mix of comedy and stupidity that would numb the brain cells of anyone involved.

Jake Carson (John Cena, who is looking like Jim Varney every day now) is a veteran smokejumper (like a firefighter, but a lot cooler according to Jake) who is next in line for the position of commander when the news of Commander Richards’ (Dennis Haysbert, who is NOT in good hands with this movie, he should fire his agent) impending retirement. His team of firefighters is down a few men, but he thinks that he can whip them into shape to show off to Commander Richards when the imposing figurehead comes down in the next few days to check them out. The only thing is, he’s just rescued a trio of young kids from a burning cabin up the mountain, and it’s up to them to take care of the trio until their parents get back.

Yeah, you can probably guess what happens next if you’ve seen any family friendly movies from the 1990s. The kids are out of control monsters, and it’s up to the smokejumpers to keep tabs on them, only for the kids to basically rule the roost. The stereotypical bonding of kids and adults happens, and everything wraps up with a bow on top as they become one big happy family.

Every action star seems to hit a low point in their careers when they start doing kids movies like these. Vin Diesel did with The Pacifer, the Rock did with Tooth Fairy and The Game Plan (which was the least egregious of his kids movie endeavors), and now John Cena has done with Playing With Fire. The movie is excruciating to watch, putting forth some of the worst cliched moments in film history, with a stale plot, stale acting, and good actors forced to just slog their way through a horrible, HORRIBLE script. I don’t think of John Cena as some awesome actor usually, but this is below even his standards.

Director Andy Fickman has some decent comedies under his belt with Race to Witch Mountain, She’s the Man, but he also did the before mentioned Rock bomb of The Game Plan and of course Paul Blart 2. Sadly this is much less Race to Witch Mountain or She’s the Man and MUCH more Paul Blart 2, but even less funny. Even Keegan-Michael Key and John Leguizama couldn’t bring any humor to this movie, and the two solid actors just flail around begging for Fickman to hit the “cut!” card and end their scenes, putting them out of their misery.

Well, if the movie can’t be good, at least the video encode is. The digitally shot movie looks incredible on 1080p Blu-ray, framed in 1.78:1 AVC, and the movie almost looks photo realistic at times. Colors are bright and vivid, and the entire image is about as crystal clear as you could hope for. Skin tones are balanced and natural looking, and the color scheme is very much neutral in tone. You can see the creases and lines forming on Cena’s thinning face (probably the lack of steroids now that he’s mostly out of the wrestling circuit), and shadow detail is exemplary. There’s some mild crush in the cabin at the beginning, and a few spots of banding, but nothing too wild. All in all, a very crisp and cleanly detailed digital image.

The 5.1 DTS-HD MA track is very robust and solid for a comedy mix, and has more than a few hearty thumps along the way. The opening scene with Carson and his crew rescuing the kids is filled with the heavy thud of helo rotor blades, a rousing score, and the surrounds are lit up with the sounds of crackling fire. The track calms down quite a bit when the kids come back to the mountain station with the smokejumpers, but there’s still a lot of hi-jinks and kiddy action to keep the movie bumping. Dialog is well placed in the center of the track, and there’s even some more bassy moments (such as the truck/cliff rescue scene at the end). A solid comedy mix for sure. 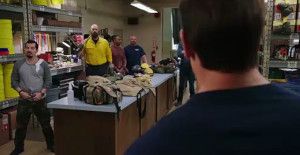 • Storytime with John Cena
• Deleted Scenes
• Bloopers
• Lighting Up The Laughs
• The Director's Diaries: Read By Star Cast
• What It Means To Be A Family
• The Real Smokejumpers: This Is Their Story

Yeah, it doesn’t take a rocket scientist to figure out that Playing With Fire is a complete bomb of a movie, and not worth your time. I try to find something positive in everything I watch, but this is like watching a nightmare of bad 90s movies over and over again for 96 minutes, and I was almost crying wishing the film would stop before it did. The audio and video scores are solid enough though, and moderate extras, but I can’t in good conscience recommend this to anyone unless they’re planning to use it to torture somebody else (which I’m sure Gitmo could actually do) to death. Just skip it.