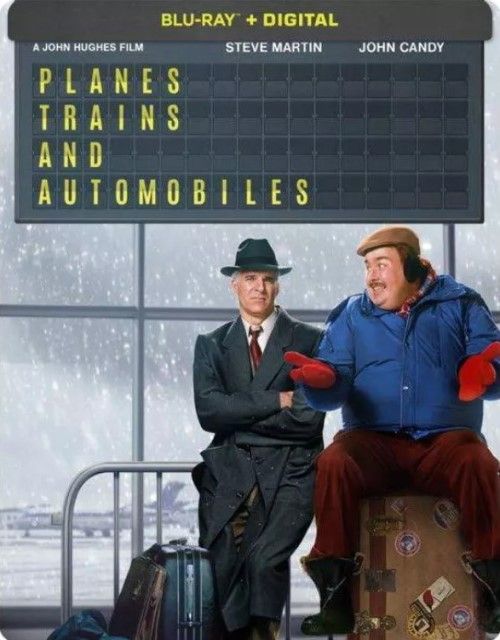 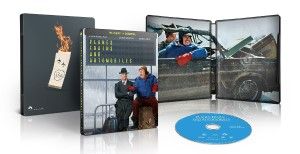 Movie
Planes, Trains and Automobiles is one of the most re-released titles on Blu-ray. It’s been released a grand total of 10 separate times over the course of Blu-ray’s life span, usually with small tweaks like a DVD copy added, a digital copy, but never a new video encode. In fact, it’s had a pretty weak video encode every since Paramount released their DNR smeared single disc edition back in 2011. I reviewed this film in both the John Hughes 5 film collection as well as the 30th anniversary set back in 2017, and this new Steelbook is one of Paramount’s re-releases of the same 30th anniversary set, just in steel book form. Thus if you’re a person new to the film, or you’re really itching to have a REALLY nice looking steelbook (I’m not even a wild steelbook fan, but even I have to admit that this is a really nice and classy artwork release for one of the greatest comedies of all time) then this might be a good release to grab. For those of you who already HAVE the film on Blu-ray in one of the 9 previous releases, then don’t worry. This is the same disc you have always had and no need to upgrade.

Below I’ll be copying over my analysis from the 30th anniversary edition (which was reviewed HERE.

I actually never saw Planes, Trains and Automobiles back during the 80s and 90s. Even though I grew up with Steve Martin and John Candy, I was never allowed to see it as a child due to the R rating. As such, I was only able to view the film much later in life. The 2012 Blu-ray was actually my first viewing of the film and I ended up not appreciating it like I thought I would. The movie has been labeled as a John Hughes classic, but unlike Sixteen Candles or The Breakfast Club, it’s not a teen comedy. Instead the movie focuses on two men trying to get home to their families when EVERYTHING is going on around them. My initial discomfort and dislike stemmed from the fact that I was expecting a slapstick comedy, and what unfolded was a dark comedy with hints of slapstick mired in pounds of darkness and bitter sadness. This expectations disappointment made me think of it as a HUGE failure, but over the last 5 years I have come to appreciate the 80s film more than I ever expected I would once I actually understood what the film was about.

Neal Page (Steve Martin) is desperate to get home for Thanksgiving dinner with his family in Chicago, but is sadly stuck in a business meeting in New York City. After barely getting out of the meeting he attempts to flag down a cab in this busy holiday season, and ends up having it stolen right out from under him. Sitting at the airport with a delayed flight, Neal comes face to face with the man who stole his cab. One Del Griffith (John Candy), a shower curtain hanger salesman who lugs around a giant over sized luggage container. His only fault is that he talks to much, has an annoying personality, and just ends up sticking to Neal like glue. Neal think his day is about to get better, but it’s about to get SOOOOOO much worse, as his first class ticket is downgraded to coach, and fate would have it that he be seated RIGHT NEXT TO Del for the duration of the flight.

To make matters worse, their flight is re-routed from Chicago to Wichita, Kansas, leaving Del and Neal stranded in the Midwest while their families wait for them back home in Chicago. Well, that’s not about to stop Del, who does his best to get the pair a room, snag a train back to Chicago, AND gab Neal’s ear off in the process. Neal, on the other hand, is about to beat his newfound traveling companion about the head and shoulders with a lead pipe, but along the way the two mean slowly begin to form a friendship due to the hardships they face together. Neither one of them is in any way remotely compatible, but the trials and tribulations of a wasted Holiday vacation slowly form pain and suffering into reluctant kinship and camaraderie.

Planes is not a movie that you’re going to laugh hysterically at, at least not at first. There are some humorous scenes throughout the movie that inspire laughter, but they are born out of pain suffering. Something that allows a melancholy ribbon to weave its way through the film and create a bittersweet smile across your face. Sure, there are hijinks along the way. Things burn down, Neal wipes his face with dirty underwear, mishaps create even more frustration, but the real joy and enjoyment of the movie comes from the fantastic sense of friendship and true love that is formed when two men are stripped of their facades and forced to deal with each other on a raw and primal level. The anger and frustration from Neal is palpable and makes you start to loathe the insensitive man, especially when you see how much it huts poor Del. However, its these vicious moments that set the movie up for the second half, when the men are stripped bear of their anger due to the sheer exhaustion of dealing with each other for a couple of days. It’s here where the true spirit and meaning of holiday love and friendship start to bond the two men together through their dark times.

While Planes, Trains and Automobiles is not a laugh a minute slapstick comedy, it is a film that is infused with a near perfect amount of heart and soul to it. The movie can be funny, it can be be sad, and it can be depressing at the same time. A flurry of emotions come and go throughout the 93 minute run time, but by the end you’re wiping away a tear of joy and happiness as the culmination of pain and suffering bring together two men who wouldn’t have even given each other the time of day otherwise (at least Neal wouldn’t have). Martin and Candy are in full form, both playing their roles equally well, and elliciting a whole range of emotions from the viewers. Martin is both hilarious and despicable, while Candy makes you want to both laugh and cry at the same time. But no matter the sensation, they both work together to create an amazing on screen experience that has become one of John Hughes most well loved films over the last 30 years.

Sadly Planes, Trains and Automobiles is a regurgitation of the old 2012 Blu-ray from Paramount pictures. Sporting a transfer that features some pretty nasty grain reduction and smoothing that is probably taken from an old master, it is re pressed onto Blu-ray with nothing done to it to update it for the modern days. As such we’re privy to the same old smooth and pasty looking film that shows WAY too much grain reduction for its own good. The biggest boon to the film is the bright colors that pop off the screen, ranging from the bright cherry red of a hippy cab, to the nice royal blue of John Candy’s jacket. Fine details on jacket coats, and the locations appear fine enough, but if you look at faces and facial tones they appear overly waxy and smooth. So smooth in fact that you can’t seem to see much gain at all. Even then, the grain that does appear is more akin to noise than actual grain. Blacks are impressive though, and shadow detail is more than satisfactory. The transfer is not some travesty, but the old baked in flaws from 5 years ago are still present in this release, and it would have been nice to see a 4K master or at least a new encode without the digital smoothing.

The same thing goes for the DTS-HD MA 5.1 track, as it is the same recycled audio mix from the previous Paramount and Warner brothers releases. This isn’t a bad thing though, as the track is quite impressive to say the least. The film is extensively dealing with dialog and vocals, so we’re not dealing with a wild and kinetic surround experience, but the track does well enough to please just about everyone. Surrounds get some decent workout with the crashes and rush through airports and train stations, but the dialog is really the crown jewel of the equation. Vocals are crisp and clean, while the balance is even among the channels. There’s some mild LFE in the mix, but this is really a front heavy experience that does well as a comedy track.

• In-depth retrospective on John Hughes' career that includes interviews with those who worked with him and explores his indelible impact as a writer and filmmaker.
• Getting There is Half the Fun: The Story of Planes, Trains And Automobiles
• John Hughes For Adults
• A tribute to John Candy
• Deleted scene

Planes, Trains and automobiles is a fantastic little comedy that has a lot of heart, but a heavy melancholy undertone to it as well. It features John Candy and Steve Martin at their finest, and also a bitter look at reality despite the comedy trappings. The movie is what I would call the original “dark comedy” styling of the 80s, and it rings true as much today as it does 30 years ago. Candy and Martin where living on top of the world, and the movie’s star power drew an amazing reaction from audiences, and the Blu-ray release is well worth checking out. My thoughts still coincide with the 30th anniversary set. That is, I'm a little frustrated that a comedy as legendary as this hasn't gotten the Paramounts Presents treatment and we get a full 4K remaster of this seminal comedy. Being the same transfer (both audio and video), I would be hard pressed to upgrade my copy of the previous releases by Paramount and Warner Brothers, but if you haven’t had a chance, then this is a great way to pick up a classic comedy. A fun watch for sure.

Thanks for the review. A great watch indeed! Steve and John are hilarious together.

I love this movie and the Steelbook packaging is very nice. Hopefully we get a new video encode someday because this one isn't anything to write home about.
T

I have adored this movie ever since it came out and while the Steelbook does look great it is not worth the double dip. If they ever decide on a proper rescan of this movie it will be a day one purchase for me.
You must log in or register to reply here.
Share:
Facebook Twitter Reddit Pinterest Tumblr WhatsApp Email Link