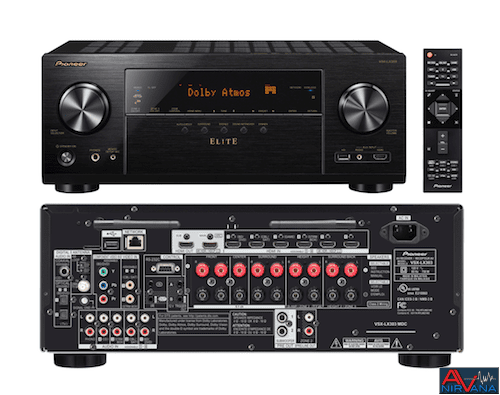 The VSX-LX303 presents nine channels of amplification for widely varied speaker arrangements. Users can run either 5.2.4 or 7.2.2 immersive sound layouts, or opt for smaller surround sound configurations while reassigning power to speakers in (up to) two other Zones. The receiver supports both DTS:X and Dolby Atmos immersive sound decoding, in addition to offering immersive upmixing of popular legacy codecs utilizing Dolby Surround and DTS Neural:X technologies.

Pioneer touts the LX303’s power stability and output precision, even when power is required by all nine channels simultaneously.

The VSX-LX303 provides music fans with incredible versatility. Those users interested in ease of use will appreciate the inclusion of built-in Wi-Fi, Bluetooth, and Apple AirPlay, along with onboard support of streaming services such as Pandora, Spotify, TIDAL, and Deezer. While users looking for pure playback will appreciate the receiver’s support of Hi-Res audio courtesy of networked and USB sources. Along with support for (up to) 192 kHz/24-bit ALAC, AIFF, FLAC, WAV, and 5.6 MHz DSD files, the LX303 also supports Dolby TrueHD audio tracks.

Pioneer has packed the LX303 with three different options for whole-home audio: FlareConnect, DTS Play-Fi, and Chromecast built-in. All three are unique solutions that essentially allow the receiver to stream music to compatible equipment and speakers placed around a home – including audio sourced from CD players and turntables.

This looks like another great entry from Pioneer. Really enjoying my Elite VSX-LX102 so I imagine this will be quite impressive. I'm hoping you get this or another of Pioneer Elite's new receivers for a full review.

Agreed. Pioneer makes solid gear and this certainly appears to tick off a lot of boxes at a competitive (not cheap, but competitive) price point.