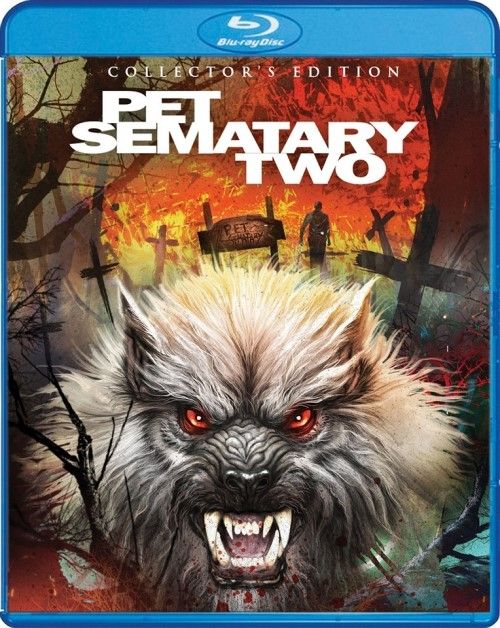 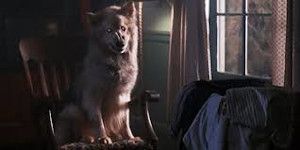 Movie
1989’s Pet Sematary (based off of the 1980s Stephen King novel of the same name) was a smash hit for Paramount, and that meant that a sequel was definitely in the card for the otherwise one off film. Pet Sematary didn’t really need a sequel as the film was a self contained story, but that doesn’t stop studios from seeing those sequel dollar scenes, and green lighting a sequel nearly as fast as the first one was out of theaters. 3 years later in 1992 we got this, and it was a massive flop for Paramount, causing them to put a screeching halt on any more horror sequels (which during the 1990s was a massive thing, as countless Friday the 13th and Nightmare on Elm Street sequels were being churned out). With the 1989 film being released on Blu-ray and 4K, and the new 2019 remake of the original being released last year, it was only a matter of time before Scream Factory (subsidiary of Shout Factory) got their grubby little hands on this forgotten sequel and put it out. Shockingly they actually pulled out all the stops, putting a brand new director approved scan of the film from the OCN, a ton of new extras, and a snazzy collector’s edition packaging (with reversible cover art with the original cover art on the flip side) to put next to the other two movies on our shelves.

Outside of the mentioning the Creed family from the original film, Pet Sematary Two really has very little to do with the 1989 classic (and of course the tradition of raising the dead in the native cemetery). After beloved film actress Renee Mattews (Darlanne Fluegel) dies of electrocution on set, her son Jeff (Edward Furlong) moves back in with his father Chase (Anthony Edwards) and moves out to Ludlow, Maine in order to process their grief. Chase is the new vet in town, taking over for the now gone Creed family, and as the two settle in to small town life the typical tragedy occurs. While Jeff is being bullied by the local jerk Clyde (Jared Rushton), he makes a new friend in the form of chubby Drew Gilbert (Jason McGuire), who happens to be the son of the local Sheriff Gus (Clancy Brown). 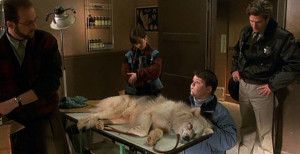 Gus is a piece of work, hamming up the role as scummy step father with gusto, and ends up shooting Drew’s dog out of spite. Drew happens to know of the legends of the ancient burial grounds, and wheedles Jeff into helping bury his beloved pooch out in the same burial grounds that we all know brings things to life. The pup comes back, but NOT in the way the boys intended, with the beast being much more supernatural than natural at that point. However, the dog is not the only thing to come back, as Gus’s vicious streak leads to confrontation that requires HIM to come back from the dead, and thus terrorize the place with an even MORE evil version of the douche bag sheriff than we had before.

Mary Lambert is all over the place with her direction. We’re not really sure who the real villain is, as the dog is back in almost werewolf form and integrates into the film with sometimes hilarious results (the human body, dog head, dreams that crop up later on had me doubling over laughing at the ludicrous nature of it all). Lambert also takes the seriously disturbing nature of the pet sematary itself and makes light of the situation for most of the film. Clancy Brown is given the center stage here, as Lambert allows him to just ham it up to the nth degree, cheerfully chewing up the scenery with a sneering smile. Later on it goes a completely different direction, with Jeff almost becoming a villain as he tries to reanimate his dead mother Renee, and then Lambert takes a more somber direction as we mournfully take a look at all the deaths that have happened (even though most of the deaths have been made light of for the majority of the run time). It’s a bizarre film, trying to capitalize on the rising popularity of Edward Furlong in a post Terminator 2 world (which would soon crash HARD), and just meandering along as an unneeded and rather hokey 90s sequel to a film that already wasn’t a masterpiece (as much as I love the original film, it’s just NOT a true classic like others).

Rated R for violence and language throughout 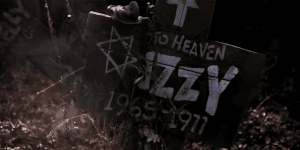 Scream Factory announces the sequel as having a new 4K scan from the original camera negative approved by Mary Lambert, and the upgrade is certainly rather nice. The old DVD was never a looker, but this one is a solid increase in clarity. The new scan seems to have had some filtering applied to it, though, as certain scenes seem to have a rather organic layer of film grain, while others are a smoothed out and lack that grain texture. Details are readily available and the cleaner look helps the warm autumn style colors pop just a bit more. Cool blues are applied to the inevitable trip to the Indian grave yard, but the whole film has this slightly orangey look that was very predominant in the 1990s. Blacks are inky and dark with only a few scenes that look crushed. It’s a solid transfer, with the only major thing that I can think of as a negative is the strange filtering applied to the image.

Scream Factory gives us the typical 5.1 and 2.0 tracks in lossless DTS-HD MA to enjoy, with the 5.1 being the theatrical experience that we’re going to review here. The 90s mix is rife with acoustic and typical early 90s metal for the scoring, and said music comes through nicely. The dialog is sharp and clean, with precision for the simple conversations as well as the highly emotional screaming that happens in the more horror heavy aspects of the film. Dog barks are sharp and vibrant, and the low end (while not being massively heavy) shows off some good hits here and there. Surrounds are very VERY impressive with the sounds of rustling leaves, dirt bikes coming up on Jeff from behind, as well as the before mentioned score.

​
Pet Sematary Two is PURE 1990s schlock to the core. After the 80s binge of gore and terror the 90s wallowed in over use of wonky special effects, cheap CGI and low grade horror sequels. Pet Sematary Two falls right in line with that, giving us the horrible acting of Edward Furlong, but luckily stays away from using the ever popular CGI that films like The Wishmaster and others of it’s ilk fell prey to. The film is cheesy, schlocky, hammy to the core (with Clancy Brown chewing up the scenery almost as much as Peter Stormare would), and so bizarre that I actually kind of like the film. It’s nothing at all tonally similar to the original, let along the 2019 remake, but really the movie is it’s own little bizarre world. Scream Factory has given us a great 5.1 audio mix as well as a decent re-scan of the film, along with a TOOOOOOOON of brand new extras to enjoy. So if you’re at all a fan of the film (or just a series completionist), then this collector’s edition is well worth picking up.

Thanks for the review. I enjoyed this movie when it came out years ago.. Will revisit this one.