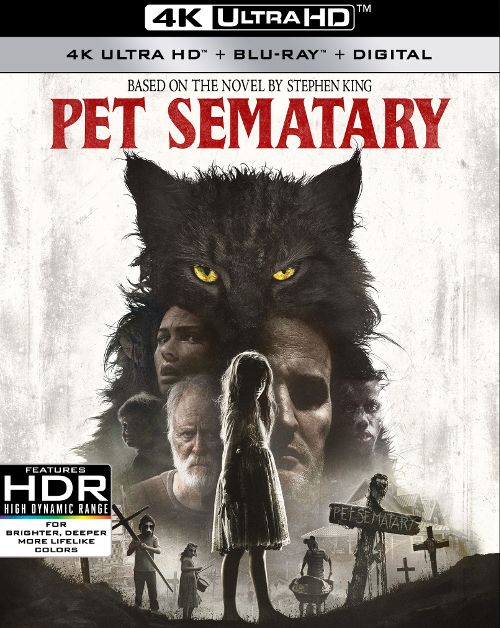 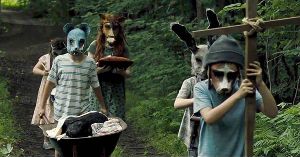 Movie
Out of all the Stephen King novels and movies out there, none were more creepy to 9 year old me than “Pet Sematary. I guess I’m not the only one either, as Stephen King himself has said multiple times that “Pet Sematary” was the book that he felt he pushed the line too far. From the “Pet Sematary” dedication.

When I'm asked (as I frequently am) what I consider to be the most frightening book I've ever written, the answer I give comes easily and with no hesitation: Pet Sematary...It's the one I put in the drawer, thinking I had finally gone too far...I had gone too far in terms of my own personal feelings. Put simply, I was horrified by what I had written, and the conclusions I'd drawn.

It’s not a hard leap of the imagination to see why either. Horrible things happening to innocent children are much more disturbing than it happening to “normal” adults, pets, or aliens to the human subconscious. Think about it. Words like “rape”, “torture”, “death”, “murder”, “abuse” all sound bad enough as they are. Now add the word “child” in front of each of those words in your mind and watch how your skin crawls more viscerally. I guess it has to do with our paternal instincts and the horror one finds at a true INNOCENT” having something happen to them. Thus when Stephen King wrote a story about murdered child coming back from the dead and terrorizing the living, it was seen as one of his more horrific works.

Pet Sematary (whether in book form or in the film) really is a horrific tale on the surface and underneath. It’s a story about a family who has suffered horrible losses, and instead of trying to mend itself from the inside out, utilizes opposite methods to try and patch the wounds that have formed. The end result is a tale of terror and disturbing monstrosity that evokes all sorts of nasties from the other side of the veil, and leaves one with an uncomfortable feeling at the end.

I grew up watching the original Pet Sematary on VHS and DVD, and it was a bit of a mixed bag as a film. On one hand it is REALLY creepy and disturbing, especially when the young son comes back from the grave to lay waste to his father. The ending is one of those heart wrenching ones that leaves you more sad for those involved in the story rather than completely horrified and disgusted. On the other hand, the movie suffered from several faults, one of them being a bit hokey with the acting. Fred Gwynne especially (everyone knows him as Herman Munster on The Munsters) seemed out of place as old Jud, and instead of portraying a sad old man feels a little too much like Herman Munster at times. That being said, it’s still a favorite watch of mine and I have probably owned it on 5 different sets over 4 different formats (VHS, DVD, Blu-ray and now the new 4K UHD disc that came out of a few months ago). 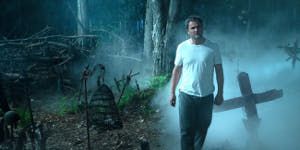 Now, It’s almost impossible to review a remake of a classic film without comparing it to the original, and directors Kevin Kolsch and Dennis Widmyer do an admirable job keeping to the basic outline of the original movie, but have a hard time capturing the elements of the book that really made it terrifying. Dr. Louis Creed (Jason Clarke) and his family move into idyllic Ludlow Maine, coming from the hectic world of Boston. Mother Rachel (Amy Seimetz) has had a difficult childhood and with the pressures of big city life gone, she and Louis can raise their two children, Ellie (Jete Laurence) and young son Gage (Hugo & Lucas Lavoie) in relative peace. However, their world is turned upside when Ellie’s kitten Church (short for Winston Churchill) gets hit by a truck. Kind older neighbor Jud (John Lithgow this time around) takes pity on the poor child and offers to help bury the cat at a “special” place that he knows about.

Well, as we all know, that special place just so happens to be an ancient Indian secret that has been lost to the ages out in the Maine wilderness. After burying Church there the Creed family wakes up to find Church has found his way home, alive and well. Or at least a facsimile of Church has found its way back, because the cat that is at their doorstep is no longer the kind and cuddly animal that was once the family pet. It turns out that this ancient Indian place returns dead beings to life, but they are either possessed by something otherworldy, or else irrevocably changed. When one of the two children gets hit by a semi truck a few weeks later, the family falls apart. Rachel leaves to a family member to come to grips with her own grief and childhood drama, while Louis stays home and inevitably resurrects his child just like Church was. And just like you would expect, what comes back is NOT the child he once new, but only his child in form.

Pet Sematary is an interesting flick. The original 1989 film stuck VERY closely to the book, but it missed some of King’s exposition and a few scenes of the novel. Despite it’s hokey acting it was a terrifying psychological horror film about the follies of dealing with problems from the outside in vs. the other away around. The 2019 film is it’s own movie, and while it leaves out some of the scenes in the book, it also folds in some scenes from the novel that weren’t in the 1989 film either, so it’s its own film too. The acting is top notch, with both John Lithgow and Jason Clarke turning in stellar performances. Lithgow’s Jud steals the whole movie really, as he’s leaps and bounds better than the Herman Munster impression from 30 years ago. However, there’s a few neat twists that end up being a bit generic for some reason. The director’s and writers mess with the audiences head a bit, as there are TWO children instead of just one, and they try and fake the audience out over which child is going to be the one who comes back like Church. A move which is kind of a neat nodding to the original, but also a bit cheesy.

The 2019 remake is a very solid horror movie, and it’s really not a bad movie at all, but it lacks the psychological horror that was in the first film and made that 30 year old movie so successful. The better acting and new scenes from the book really flesh out the movie a bit, and once the final act roles around the terror kicks up into overdrive, even if it’s just classic monster movie terror instead of being heady.

Rated R for horror violence, bloody images, and some language

Shot using Arri Alexa Mini and Hawk digital cameras (2.8K and 3.4K resolution, then transferred to a 2K digital intermediate for the master), Pet Sematary enjoys a modest upgrade over the Blu-ray. The dimly lit film and the 2K master keep it from being a massive upgrade, but rather one that stabilizes and fine tunes the image rather than completely shocks and awes the audience with how different and vibrant it looks. The HDR/DV presentation deepens the blacks to a silky depth, and shadow detail is very impressive. The dimly lit film shows off primary colors well, but looks a bit (intentionally) murky and grim. The color palette is more neutral than anything with light shades of blue and gray covering it. The murkiness doesn’t always translate to fantastic detail levels, but the 4K UHD upgrade is noticeable with background textures on walls and the forest, as well as up close facial shots. It’s a good upgrade, but not a wild one.

The Dolby Atmos track (found on both the 4K UHD disc and the Blu-ray) is a VERY impressive sonic listen. The track is atmospheric and quiet at first, but it is punctuated by some really slamming moments (such as the horrifying truck accident part way through the film) that really tear up the listening position with heavy bass and an oppressive use of the surrounds. The surround activity is nuanced and detailed, with the chirping of birds in the forest, or the whisper of a ghost behind the ear. There’s constant background activity to keep them active and the overheads get a good workout with some discrete and ambient background sounds. Dialog is crisp and clean, and the mix is one I’m giving a two solid thumbs up.

- Louis​
- Rachel​
- Ellie​
• The Tale of Timmy Baterman
• Beyond the Deadfall

- Chapter One: Resurrection – Directors, screenwriters and cast discuss bringing this classic back to life​
- Chapter Two: The Final Resting Place—A deeper look into finding the right location for the terror to unfold​
- Chapter Three: The Road to Sorrow— Inside the film's tragic themes and creating the iconic cat "Church"​
- Chapter Four: Death Comes home—Unearth the creepy elements behind the climax and final scenes of the film​

Pet Sematary 2019 is a solid movie as I said. It takes the general framework of the book and makes it it’s own thing, but it has a problem with being rather generic and rote at times. Instead of going into the problems of dealing with loss and pain this way, it opts to go a more traditional blood and gore route once the awakenings have begun. The acting is solid all the way around, but John Lithgow proves once more why he’s got a sort of legendary aura around him for his characters. The 4K UHD disc is a solid upgrade over the Blu-ray video wise, but isn’t leaps and bounds thanks to Paramount putting the Atmos track on both the Blu-ray and the 4K UHD disc. All extras are on the Blu-ray disc as well. Solid entertaining watch.