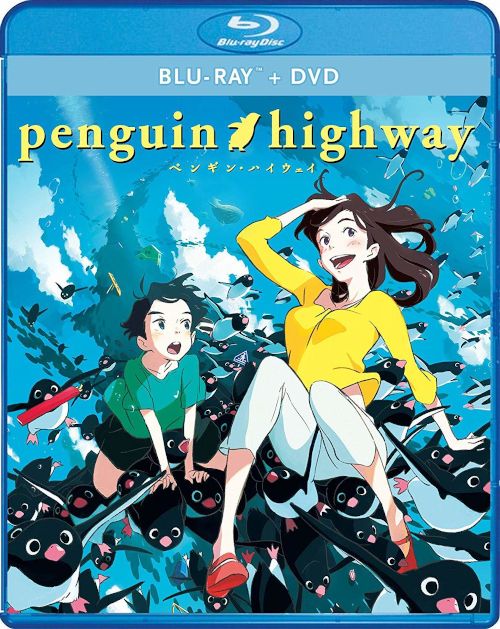 Movie
Elven Arts has fast become one of my favorite animation studios, as they have done wonderful work over the years, and put out some incredible looking films. I actually hadn’t heard of Penguin Highway until I got the press release for it a few months back, and after looking into it a bit I realized it was another one of Elven Arts productions and I was immediately excited. Couple that with the fact that the director, Hiroyasu Ishida, was making his first feature film debut (he’s made some adorable shorts like Fastening Days and Rain Town so far) and I was excited.

The film itself is a fun blast, but one that has some strange “quirks” to it as well. Ishida crafts a film that’s all about penguins coming to a city in Japan (even though Penguins are usually only found in the southern hemisphere). The real story is about a boy named Aoyama (Kana Kita) who notices the penguins arrival. Curious about them, the scientific and stoic minded young child begins to document what makes them tick, only to find out that they’re stemming from a young woman that he knows at the dentists office. From there the plot only gets stranger and strangers as Ishida blends in Stranger Things and Close Encounters style mystery with the child like wonder of a boy learning about life.

The reality of the situation is that the plot about the penguins is really window dressing. The real story is a pre-teen boy learning about the ups and downs of life through every day experiences. He’s learning about the allure of a woman’s chest (his discussions about boobs with his best friend had me rolling on the ground, and if you’ve ever been a pre-teen adolescent you can IMMEDIATELY relate to it), dealing with bullies, and just coming to grips with your own burgeoning adulthood while still being a child. The story is sweet, kind, and sometimes bizarre, but rather entertaining.

Ishida sometimes loses his main point off and on throughout the script, and the movie suffers from a slightly bloated run time at just under 2 hours (personally this would have worked better in a 90ish minute run time if my opinion means anything), but he manages to capture the chaotic nature of youth and the pitfalls of learning how to become a teenager from someone who is breaking out of their innocent childlike shell for the first time. It’s a strange picture, but once that’s oddly intriguing and fascinating to watch despite the slow burn nature of the drama

Penguin Highway is given a mildly odd aspect ratio of 2.20:1, and the AVC encode looks simply spectacular. The digital animation is bright and cheery, with lots of emphasis on sky blues, bright greens and soft pastels in the background. The blacks and whites of the penguins show up sharply, and the few dimly lit scenes that we DO have show no signs of banding that I could see except for a VERY few (and brief) instances. Every line and crevice is perfectly rendered here, with fantastic detail in forest backdrops, or the “ocean” that they go and investigate in the field. Overall this is as simply superb looking transfer from Shout Factory, and the animation from Elven Arts is jaw dropping to behold.

The 5.1 DTS-HD MA tracks in both English and Japanese are very VERY similar in nature outside of the dubbed language. If you’ve read my anime reviews before you know that I’m going to pick the Japanese track over the English dub as a “purist” move, but both are so similar sonically that it’s a matter of pure choice. Subtitles are a nice clean white, and I noticed no major misspellings to jar the audience out if you’re watching the original language track. Dialog is clean and clear, and while this is not a massively action packed track, the surrounds are used quite a bit throughout with the whipping of wind through the grass or the pattering of raindrops in the background. LFE is supplementary, adding weight to foot falls or crashes, but staying fairly innocuous throughout the rest of the mix.

Penguin Highway is a bit of an odd film, but one that has a rather poignant story running underneath the surface. It tells the tale of growing up and growing older under the guise of a strange story about penguins magically appearing. The second half of the story gets a bit convoluted and Ishida sometimes loses track of what he’s trying to say, but it’s a gorgeously animated film that is great to watch multiple times in order to capture all of the subtleties he has going on in the subtext. Shout Factory has put together a fantastic array Blu-ray with great video/audio and a decent array of extras to sift through. Worth checking out.