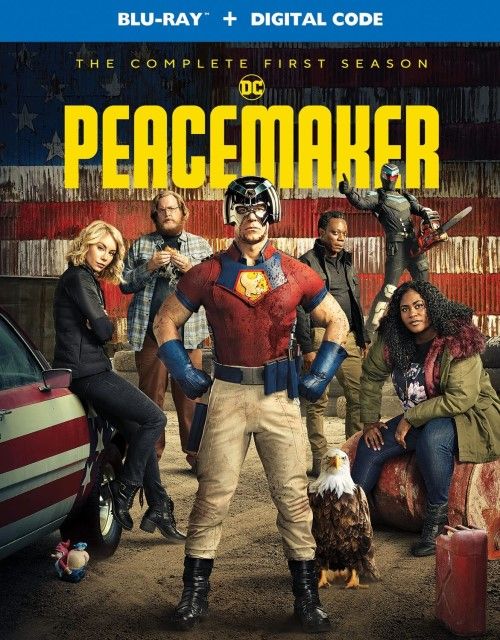 I was one of the people who immediately thought that a Peacemaker TV show would b a futile money grab after James Gunn’s Suicide Squad. Don’t get me wrong, I actually really enjoyed the character in the movie. He and Idris Elba sort of stole the show with their back and forth super violent banter. But usually these short run super hero TV shows are a BIIIIT underwhelming (or maybe I’m just becoming jaded with the stuff that Marvel is pumping out on Disney+). The character was perfect in small doses, with hyper violence, profanity, and John Cena hamming it us a misguided wannabe super hero with a penchant for achieving peace in the most violent ways possible (as Peacemaker says “I love peace so much I’m willing to kill every man, woman and child to achieve it”). But color me more than a bit shocked when HBO Max’s 8 episode season 1 blew me away with how fun and twisted it was. The series manages to balance the craziness, the hyper violence, and a semi redemptive arc for the lone anti-hero.

After the events of Suicide Squad Peacemaker (John Cena) heals up from his wounds, and tries to slip away from Amanda Waller’s gaze and go back to living in his trailer park. Buuuuut, we all know that Amanda Waller (Viola Davis) is not exactly the forgiving type. As punishment for their betrayal in the movie, Waller sends Agents Harcourt (Jennifer Holland) and Economos (Steve Agee) on a top secret mission, and makes them use Peacemaker as one of their primary weapons. That means they now have to work with a stupidly racist, misogynist, braindead soldier who loves killing, and loves his pet Eagle, Eagly (hilariously voiced by Dee Bradley Baker).

The mission turns out to be more than they bargained for. A few search and destroy hits end badly, leaving the crew with more questions than answers. Questions that make them dig JUST a bit deeper than they should, opening up an alien invasion, betrayal from within their own midst, and general blood and mayhem to make this NOT your grandmother’s super hero show.

Peacemaker works in ways that it really shouldn’t. John Cena hams it up as the titular character, but he’s not the only scene stealer going on. His father Auggie (Robert Patrick) as the ex super villain White Dragon (a hilariously over the top KKK racist style super villain) is down right mesmerizing. You loathe him in every aspect, but Robert Patrick just has fun with his role, making him one of the better on screen appearances. Not only that, Freddie Stroma as Peacemaker’s wannabe BFF Vigilante is pure gold. The first few episodes where they’re out in the woods making themselves feel better by shooting up everything in sight is downright hilarious (not to mention he carries a dual tone Walther P99 2nd generation, which is one of my favorite pistols in the world).

My one complaint with the series is that they try to make Peacemaker/Chris have a little too much of a sympathetic arc. I kind of liked him when he was completely an anti-hero, but the show has to try and make him grow and be a likable guy at the end of the show. While that’s all well and good for some characters, Peacemaker thrives off of being a psychopath with a code, and trying to get him to adapt to a more heroic sensibility just sucks some of the fun out of his character. Still, that’s a minor gripe and it doesn’t over shadow the rest of the series.

courtesy of HBO and Warner Brothers, the Blu-ray home video presentation for Peacemaker: The Complete First Season is nothing but pure digital glory straight from the tap. It’s nothing short of perfection, with a razor sharp transfer that leaves nothing to the imagination. Colors are bright and vividly saturated, with a nice natural color grading for most of the show (there are some cool blue shots indoors, as well as some parchment yellowed looks for certain shots) with tons of detail levels in both the outdoor scenes (which are INCREDIBLE) and the darkness as well. I honestly couldn’t find any real issues with the transfer at ALL, even minimally. This is about as good of transfer as you’re going to see on the Blu-ray format. Well done Warner.

The singular 5.1 DTS-HD MA track is almost as perfect as the video is. It’s aggressive, robust, and full of surround pizazz with all of the constant gunfire and explosions. The first couple of episodes set the tone for the series, punctuating quiet dialog heavy scenes with copious action sequences that introduce some very punchy bass, great sense of immersion, and a really rich vocal range. It’s not going to have THE most massive dynamic range as it is a TV series, but this is getting really close to perfection in how it’s handled. Very crisp, very clean, and there were more than a few times where the action had the subs vibrating so hard I could feel it even with the volume turned down.

Peacemaker is pure lunacy, and a nice change of pace for your average super hero show. I won’t go so far as to say that it’s hyper violence, language and general R-rated take on superheros is going to rival The Boys (that IS a hard hill to leap over), but it’s certainly a blast to watch, and everyone involved is just having an absolute gas without going into Thor: Love and Thunder slapstick. The Blu-ray carries some good extras, and the audio/video are pure demo worthy goodness. Definitely one of my favorite super hero watches of the last few years considering how badly the CW Arrovwerse has been disappointing DC live action fans. Highly recommended