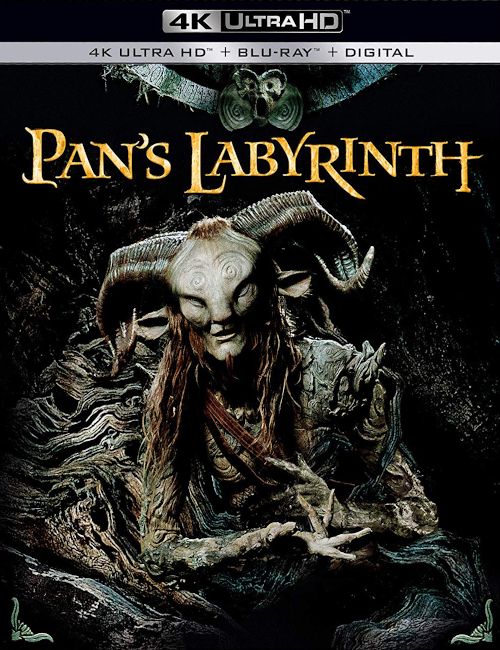 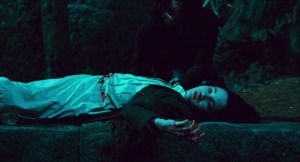 Movie
Pan’s Labyrinth along with The Devil’s Backbone are what originally got me into Guillermo del Toro’s magical works of film making fiction. I personally feel that his Spanish films are actually his best ones (as much as I guiltily LOOOOOOOVE Pacific Rim), and these two offer some of his finest and most finely polished movies to day. He’s a master storyteller, and an even better visual storyteller with his trademark creepy characters, nightmarish situations, and twisted takes on fantasy and the spirit realm. 13 years ago Pan’s Labyrinth hit U.S. cinemas with a massive rush, and it became an instant classic for fans of dark fantasy, as well as one of Warner Brother’s first Blu-ray discs back in the days of the format war, and was highly lauded as one of their best hits back in the day (wow, has it REALLY been almost 13 years since the format war started?). Today Warner brings us a fantastic new 4K UHD disc that really spices up the tired old Blu-ray transfer, which is a massively appreciated feat as the old Blu-ray was looking worn and tired.

Del Toro’s fantasy flick is a coat of many colors. On one hand it’s a dark and twisted fantasy story, a child’s tale of grief, a war story, and an adult drama all rolled into one. Poor Ophelia (Ivana Baquero) is the oldest daughter of a pregnant woman who is sadly married to a sadistic war commander during the Spanish civil war. Or more accurately, just after the civil war was fought and one. She is basically Cinderella with a male as the evil villain this go around. She’s viciously treated by him and soon retreats into a fantasy world wherein she is visited by a Faun (played by Doug Jones, which del Toro uses in films like Hellboy and Hellboy II for his extreme acrobatics and physicality) who informs her that she is the long lost queen of a magical kingdom underground, which she can return to after she performs several feats for the faun.

The feats are horrible and terrifying as it is, but it is no more terrifying than the world that Ophelia returns to in reality. Captain Vidal (Sergi Lopez) is a vile human being, epitomizing all of the evil and stereotypes that we have of the rise of actual fascism in Spain. The only reason he’s even REMOTELY civil to Ophelia is because her mother is on the way to giving him the all desired male heir to his enormous ego. Unfortunately for Ophelia her antics with the fawn brings her to do somethings that are not appropriate for a military captain’s daughter to do in the times of a campaign, enraging him even more, and causing Ophelia to go deeper and deeper into her own twisted fantasy world. 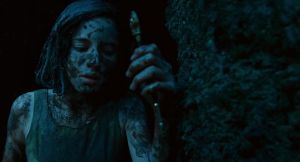 While del Toro’s fantasy world is both brutal and horrific in many ways, it’s actually a release for poor Ophelia. She sees nothing but pain in her real life, and even the horrific and terrifying tasks that she’s given by the faun are a respite from the loneliness and abuse that she suffers with her mother. If you take that fantasy element out of Pan’s Labyrinth, you’re left with the sickening realization that the movie is a very VERY bleak and depressing tale. There’s some action and adventure, but poor Ophelia’s fate is only assuaged with the understanding that there is only one way for her suffering to end. One that is both highly stylized and filled with allegory, as well as bitterly realistic as well.

Rewatching Pan’s Labyrinth reminded me of just how fantastic the story is. No matter how bleak and depressing the underlying story is, del Toro keeps you mesmerize with both the fantasy world Ophelia crafts, as well as the war story that he’s telling on top of it. Both stories are inexorably intertwined together, and if taken separately aren’t nearly as satisfying as when you take both pieces and put them together as a whole. The story rips at your heart strings and leaves the audience with a sort of bittersweet feeling in the pit of their stomach that resonates just as much today as it did 13 years ago when I sat enraptured in theaters.

Rated R for graphic violence and some language 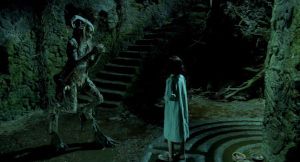 The VC-1 encoded Blu-ray from 2007 was considered a great disc back in the day, but looking back on it some 12 years later I have to realize that it really wasn’t that good of a disc by modern standards. The image was slathered in heavy DNR and crushed blacks, and was mainly hampered by the fact that Warner was still paring down their encodes to under 25 gigs so they could fit on the HD DVD format as well. This results in a picture that left much to be desired after watching so many fantastic Blu-rays over the years. The Criterion edition was a MAJOR kick in the pants for the film, with a few director approved color changes and a dramatic increase in details, which was only hampered by some mild compression issues.

Looking at the 4K UHD disc, it looks like Warner took a remastered (or at least a much improved taken on the old master) attempt at the same look that the original Blu-ray had, just with much better results. The DNR is all gone and the massive crush that plagued the Blu-ray is vanished as well. The original colors are back as well, putting the disc awash with heavy blues, earth tones and golden highlights that come and go with shockingly saturated reds and blues in the fantasy world. It appears that the new master was taken form a 2K source, which is most likely due to the 2K sourced CGI effects that were done back in the day, and all in all the disc looks great. Fine detail is way better (and solidly better than the Criterion Blu-ray I might add) with some mild softness that has always been present from the film’s source material. The image is just saturated in DEEEEP blacks, but the shadow detail is absolutely stunning, and visual clarity is the best I’ve ever seen the film look. My only nitpick is more of a collector’s wish than a real problem. The Criterion Blu-ray is leagues better than the 2007 Warner Blu-ray, so if you want the best of the best for the Blu-ray format that’s the one you want, while the Blu-ray disc included in this combo pack is the worn and beaten old 2007 disc, which had more than its share of problems. My wish would be that Criterion and Warner could have worked out a deal to have the Criterion Blu-ray included in the 4K UHD combo set, but I logically know that’s a pipe dream. 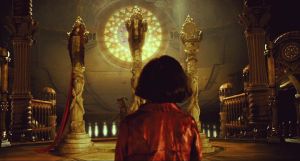 Strangely enough, Warner did not included the 7.1 DTS-HD MA track found on both it’s 2007 Blu-ray as well as the Criterion Collection edition from 2016. Instead using the theatrical 5.1 mix that was ALSO found on the Criterion Collection. In all honesty, I’m not horribly disappointed that the 7.1 mix was gone. The 7.1 mix wasn’t the theatrical mix to begin with, and if you compare the old Blu-ray vs. this newer 5.1 DTS-HD MA track, there’s almost no discernible difference except for a few scenes. From what information I could gather the 5.1 is actually more accurate to the theatrical presentation, which is why it was chose for this release as well as being on the Criterion release. That being said, part of me really would have preferred Warner to put the 7.1 mix on here as an option, since it was included back in the original Blu-ray (which is the same Blu-ray that is in this combo pack I might add). The track itself is quite good, with great channel separation and a penchant for being a bit front heavy during the real life scenes. The fantasy world gets a bit more involved, with claustrophobic missions that Ophelia’s sent on, mixed with heavy bass and some creepy ambiance.

I still think that Pan’s Labyrinth is one of Del Toro’s BEST works to date along with The Devil’s Backbone, and for good reason. He told a tale that resonated with EVERYONE in the audience, even if they didn’t like fantasy. The story was engaging, and his visuals were simply amazing. Doug Jones himself came out and stated that it was probably one of the best roles of his life (he played not only the faun, but the eyeless slenderman too). You’re just whisked away to a magical world of evil and darkness, yet still comforted with hope and joy throughout it all. The 4K UHD disc is a good upgrade over the Blu-ray from Warner, and a solid upgrade over the fantastic Criterion Collection Blu-ray as well in terms of video. Highly recommended.

Thanks for the review. I loved Pan's Layrinth when it came out long time ago. Will have to revisit this one.

I own the Criterion BD release... and have never watched it. Actually... never seen the movie (EVER). Horror can be hit or miss with me. I bought it with intrigue, but I have a sneaking suspicion I might not like it.

Mike, you give this one 5 stars... we actually have some friends coming over to watch a horror flick this weekend. I was going to pull out Cabin in the Woods. But, is this Pans might be worth it?

Pan is really not "HORROR" per se. It's more of a war drama with a dark fantasy twist to it. It can be MILDLY considered horror, but it's not traditional horror at all. Think of a bloody and dark version of Narnia meets a WWII era movie

it's a truly amazing film though, and one you need to focus on to get the most out of. It's not a movie that you just sit and drinking beer and talking with. it's a movie you experience on an emotional level (IMO of course)