On the Basis of Sex - Blu-ray Review

On the Basis of Sex 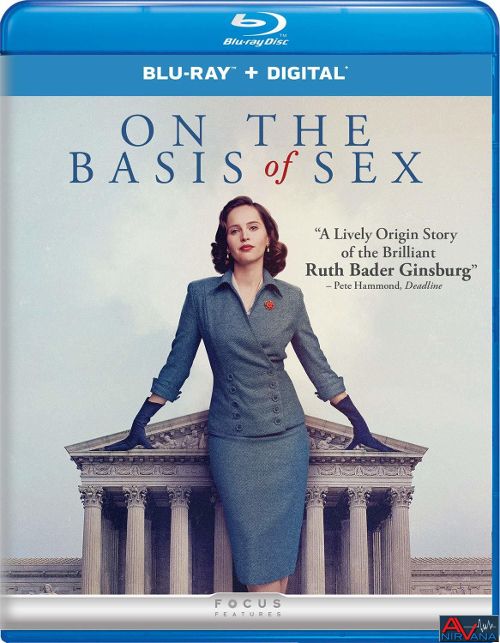 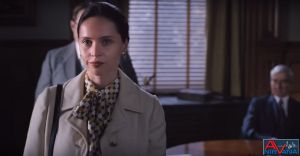 Movie
It’s become a strange thing lately. Ruth Bader Ginsberg has been the left leaning judiciary “leader” for many years, but the quiet spoken Supreme Court Justice has had very little public spotlight outside of a few comments here and there. That is until the last year when she’s been thrust into the limelight as some sort of paragon, with the media gushing about her, and various documentaries and films being made about her (The Notorious RBG for example). I could probably theorize about the reasoning behind her sudden rise to cultural icon, but that would drag this review very heavily into the controversial world of politics and serve no one any better. Needless to say the aged Justice now has her own fictional film retelling her rise to the Supreme Court, and the big sex discrimination case that literally put her on the map, and started her out as an Attorney for the ACLU.

Ruth Bader (Jones) is one of the very few women attending Harvard Law, but are still facing a whole slew of obstacles. Right off the bat she and her other female classmates are forced to defend their admittance over a male counterpart, but despite the opposition the head strong young law enthusiast rises to the top of her class. Later she is married to another Harvard Law graduate, one Martin Ginsberg (Armie Hammer), and starting her own law career. When Martin falls ill with testicular cancer (he’s one of the rare few that survived at that era), she not only continue on with her own class schedule, but attends his lectures, takes notes for him, and reteaches him what he needs to know in order to graduate as well. As the years go buy the civil rights movement comes and goes, and RBG is now a professor of gender discrimination at Rutgers due to not being able to find a job as a lawyer anywhere in the city (despite finishing up her law degree at Columbia and graduate with honors).

While her husband works in tax law, she stumbles upon the case of the decade thanks to him. A case where a man was denied a caregiver’s tax credit because the tax credit only applied to women. In short, a gender discrimination case against a man. Ruth sees this case for what it really is. Not just a simple case about a tiny tax deduction, and not even a case about a man who has been denied his rights due to assumptions about his gender, but rather a case that could send all of the other gender based laws we had in this country tumbling to the ground (for better or for worse). Teaming up with the ACLU, Ruth sets out to hitting straight at the heart of sex discrimination, and sets a landmark win in the supreme court for one of the unanimous appeals decisions in that time period.

RBG is a rather controversial figure, even though she’s stayed out of the limelight for many years. To many she is the defacto “face” of the liberal side of the Supreme Court, much like how Justice Scalia was for the conservative faction. The right hates, the left loves, much like how the opposite was true for Scalia. However, whether you love or hate the woman’s policies or Supreme Court decisions, a good movie is all about the writing and acting, and in this case it’s a bit of a mixed bag. Felicity Jones plays RBG extremely well, giving her a sense of down to earth humanity and relatability that is refreshing. Armie Hammer is genuinely likable as Martin Ginsberg (Hammer has really matured as an actor over the last few years), and the case itself is a highly inspiring case. My only problem with the film stems from the fact that it’s so entirely rote and predictable.

Predictability and “paint by the numbers” is the thing that keeps On the Basis of Sex from being an actually good or great film. The performances are there, the case is intriguing, but at the end of the day the film doesn’t try to do anything outside of your typical “here’s the bullet points of her life” scenario. We see the plucky underdog come out of Harvard, we see her rise to fame, and then overcome her obstacles via a swell of emotional music. It just feels like the movie was pieced together at a factory with producers looking for the most cliched and stereotypical plot points that would make an inspiring drama.

Now, there are some really good parts of the film to act as a counterbalance. The scene where Ruth is reciting back all of the cliched “reasons” that she is undesirable as a lawyer in New York is incredibly inspiring. The gusto and passion that Felicity Jones puts into that scene is jaw dropping, especially as the poor guy that she’s reciting them too barely stutters out a pre-facbricated excuse that holds even less water now that Ruth has effectively slaughtered his argument. The same can be said of her final argument in front of the Supreme Court. It’s concise, emotional, yet still in complete control and truly was one of her better moments judicially (in real life). 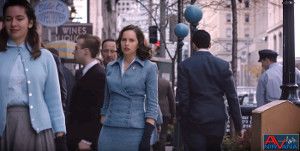 On the Basis of Sex was shot digitally at 2.8K resolution, and then transferred to a 2K digital intermediate for the home video release. Their have been great pains taken to make the digital production look as film like as possible, with strong color grading and visual textures to align it more with the 1960s and 1970s that the movie takes place in. There’s a cool neutral look to many of the newer scenes (especially later in the film), but some of the older shots in the 1960s have a more yellowed parchment tone to them. Colors are generally strong, but the fine details are nothing short of astounding, whether they be from the period piece clothing, or the makeup on Felicity Jones’ face to make her look as gaunt in the jaw as the real life Ginsberg. Blacks are strong and deep, showing off plenty of shadow detail within Ruth’s own home, as well as the dimly lit court arenas. It’s a great looking visual treat on the video front, and one that is pretty much artifact free as well.

The 5.1 DTS-HD MA tracks is what you would expect from a dramatic film’s track, with a robust delivery on the score, and a generally front heavy mix for the rest of the track. LFE is tight and punchy with the musical delivery, but otherwise reserved and rather laid back (e.g. not used very much). Dialog is strong and well placed up in the front of the room, and a strong front sound stage with the court room scenes and general hubbub of the city. On the Basis of Sex is not going to compete with films like Bumblebee, but it’s not designed to either. It’s a simple dramatic track that does everything asked of it.

• A Supreme Team: Making On the Basis of Sex – Pull back the curtain and see how this incredible team of collaborators brought this true story to the big screen.
• Legacy of Justice – A deeper look at how Ruth Bader Ginsburg pioneered gender equality in America and gained her seat on the Supreme Court.
• Martin and Ruth: A Loving Partnership – An intimate look at the symbiotic marriage between Martin and Ruth Ginsburg, and how it helped shape Ruth's perspective as a judge.

​
On the Basis of Sex is a solid enough movie for what it was, but it sadly runs into the obstacle of being a completely uninspired bit of production that tries so VERY hard to iconicize Ruth Bader Ginsberg, while outputting the least amount of effort humanely possible. The film itself is entertaining enough, and Universal’s Blu-ray is quite pleasing in both video and audio. Sadly the extras for the film are extremely lacking and combined with the mediocre film itself leaves me to recommend this one as a rental.

Thanks for the review. I will check it out once available on amazon prime/netflix.