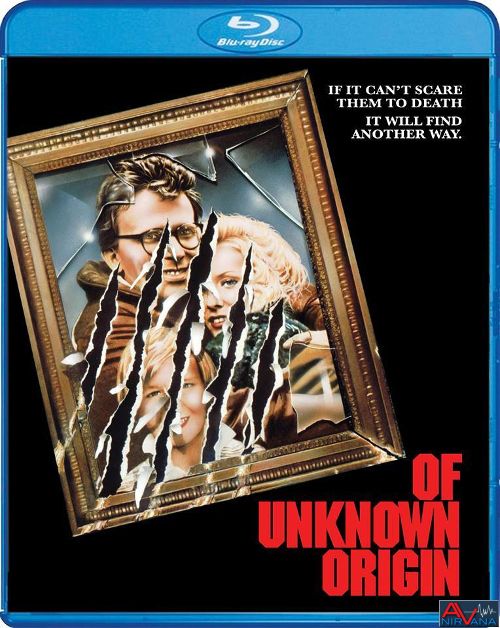 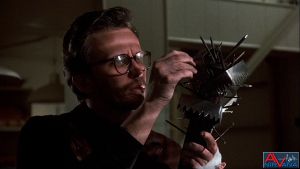 Movie
When most people think of rat horror movies they immediately think of 1971’s Willard, as the quintessential genre film. However, nothing beats 1983’s Of Unknown Origin as the more fun film starring those little vermin. It’s a simple movie that really THRIVES on being straight to the point. It’s a movie about a man vs. a rat that has infested his house, and there’s really nothing more to it. No love stories, no nosy neighbors, just a man who’s trying to kill a rat that seems to be of epic proportions and voracious nature. The terror doesn’t come from any supernatural element, or making the rat to be anything other than a rat, but from the madness that comes from this guy literally almost driving himself nuts trying to catch it.

Bart (Peter Weller) is a businessman on the rise. He’s got a nice home (that he renovated himself) in New York, a beautiful wife (played by Shannon Tweed in her breakout role), and a little boy whom he loves to death. Even his boss is fawning over him as the best man in the office, and when a big new client comes to the firm, it’s in HIS camp to take it over. However, things go south when Bart’s wife and son head off for a vacation with his rich father in law, leaving Bart home alone in the house. Well, not COMPLETELY alone, as the man finds out soon enough. It seems like there is a rat infesting the home and making havoc out of his neatly ordered life.

It seems simple enough. Get a few rat traps, set out some with a cheese bait, and wait for the little monster to get his neck snapped. Things don’t exactly go as planned though, with day after day of fruitless baiting for naught. As Bart researches more and more ways to kill the rat it turns into a bit of a full out war. Baseball bats, bladed traps, and lack of sanity cause the rat to grow (in Bart’s mind) to epic proportions and his frustration is turning into a full blown mental breakdown. 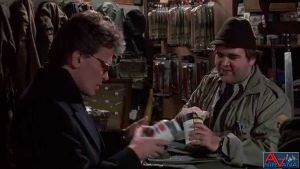 Of Unknown Origin takes its cues from hints of classic literature (you see Bart reading Moby Dick in part of the film), giving us the old tale of man vs. beast. Except in this case, it’s an elusive beast that tries its best to stay outside of the light. The terror is less visceral in nature, as there aren’t any man eating rats in the film (I know, sad), but rather the insanity that ensues as Bart slowly starts to lose his marbles from lack of CATCHING said rat. You’re never exactly sure of the size of the rat (except for once or twice near the end), but it’s mythical powers are amplified by the fact that it kills the family cat, as well as chews through wires and cables and is only shown in bare glimpses. Most of those focusing in on the nasty looking teeth of the beast.

The film is derived from a Chauncey G. Parker III novel, but is fleshed out a bit more than you would think considering the source. We get glimpses of Bart’s social and work life throughout the film, mainly as his battle with the rat affects them, but most of the story is focused on said battle with the rat. Even though we see his secretary, boss, and wife throughout the movie, but this is really a two man show (or 1 man, 1 rat show), and Peter Weller is MORE than up to the job. His sort of 1980s suave, bad boy mentality works well for the character, and that suaveness fades away to the savage anger of Robocop by the time the film is over too. Shannon Tweed is just there to scream a few times and look hot, but no one is complaining about that. 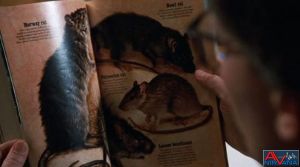 Supposedly this 1.85:1 AVC encoded Blu-ray is from a brand new 2K scan from the interpositive, and I believe it. It’s been years since I’ve seen the old DVD, but that old DVD never looked anywhere NEAR as good as Scream Factory’s Blu-ray release. The detail is absolutely fantastic, allowing us to see the greasy, nasty fur of the rat, or the well groomed clothing of Peter Weller. Contrast is a little bit on the hot side during some scenes, but overall it’s a very well balanced release with great skin tones and nice warm colors. 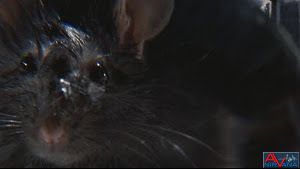 The 2.0 DTS-HD MA track is simple and unrefined, but more than capable of delivering the goods. The film really isn’t a powerhouse action flick, so the nuances of a full 5.1 mix are lost on the design itself. Dialog is well placed in the front of the room and there are no signs of hissing or crackling anywhere. The ambient noises are mainly focused on the squealing and clawing of the rat, but the final “battle” between man and beast allows for a rather boisterous encounter that leaves the house in ruins. No LFE, no surround usage, but for a 2.0 track, this is about as great as it gets. 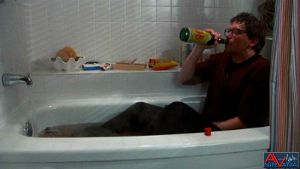 Of Unknown Origin isn’t your typical monster movie, but it does have ELEMENTS of said genre embedded in the movie. It’s more of a Moby Dick meets terror type of film, with the giant whale replaced with an over sized rat (that’s more like a small puppy in size really). Peter Weller gleefully hams it up as the frustrated homeowner, and the use of minimal exposure on the rat itself allows for the almost mythic feats of the animal seem more horrible than they actually are. While there are better monster movies out there, Of Unknown Origin is a plain FUN movie. Scream Factory has given us a great looking remaster, and the extras are actually rather beefy. Well worth snagging if you love the genre.

My kind of movie. I will be watching this one for sure
Thanks for the review!